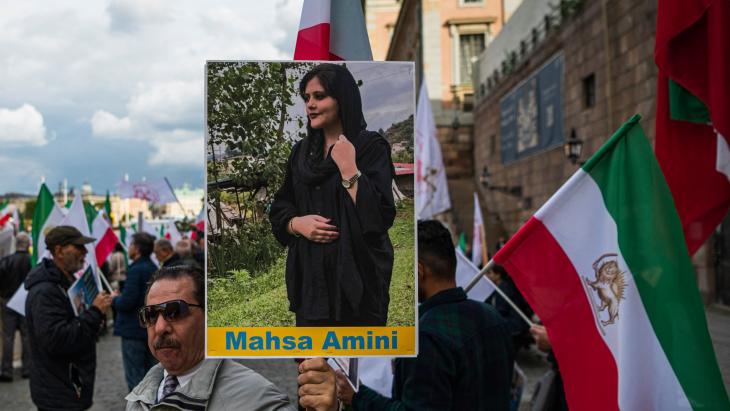 Iran is stepping up arrests of activists and journalists in a crackdown against civil society as anti-regime protests rage nationwide, activists say.

Twenty journalists have been imprisoned since the protests erupted earlier this month over the death of Mahsa Amini, 22, who had been arrested by the country's notorious morality police, according to the Washington-based Committee to Protect Journalists (CPJ).

Numerous activists and lawyers have also been held, including the prominent freedom of speech campaigner Hossein Ronaghi who was arrested over the weekend.

The arrests come on top of severe Internet restrictions and blocking of sites including Instagram and WhatsApp, which activists say are aimed at preventing details of the protests from reaching the outside world.

"By targeting journalists amid a great deal of violence after restricting access to WhatsApp and Instagram, the Iranian authorities are sending a clear message that there must be no coverage of the protests," Reporters Without Borders said in a statement.

Ronaghi, bitterly critical of Iran's Islamic leadership, said in a video posted at the weekend that he had initially eluded arrest by escaping his flat when agents came for him.

But he was then detained on Saturday when he went to Tehran's Evin prison to meet prosecutors and was also beaten by security agents, his brother Hassan wrote on Twitter.

His mother told Manoto TV in an interview that Hossein Ronaghi's leg was broken. Reports said that his lawyers, who accompanied him to Evin, had themselves been detained.

Two other lawyers have also been arrested, lawyer Saeid Dehghan wrote on Twitter. "This means defending protesters is prohibited!" he said.

Security forces on Monday raided the home of activist and writer Golrokh Iraee and arrested her, according to a message on her Twitter account.

Iraee, well known for campaigning against stoning sentences in Iran, has spent much of the past decade behind bars.

And activist Majid Tavakoli, who has been repeatedly imprisoned in Iran in recent years including after disputed 2009 elections, remains in jail after his arrest in the early hours of Friday.

'We are not safe'

Activists said two university students in their early 20s who were also beginning careers as writers – Banafsheh Kamali and Maedeh Jamal – had also been arrested.

Videos posted on social media claimed to show the moment Jamal was arrested, with a female voice heard yelling for help.

Among the 20 journalists held, according to the CPJ, are photojournalist Yalda Moaiery, who won international recognition for an iconic 2019 photo of protests, and reporter Nilufar Hamedi – who exposed the case of Amini by going to the hospital where she was in a coma.

Hamedi's husband wrote on Twitter that Hamedi had said in a call from jail that she was in solitary confinement, and was unaware of the charges against her.

Moaiery is being held in the notorious Qarchak women's prison outside Tehran, from where she told the Iran Wire news website that "we are not safe here" and "the situation is very bad".

The authorities also arrested five prominent members of the Bahai religious minority in different cities across the country, said Diane Alai, representative of the Bahai International Community to the UN in Geneva.

The Bahai – Iran's largest non-Muslim religious minority but not recognised in the Islamic Republic – had already been experiencing a crackdown even before the protests started, with senior figures arrested and homes destroyed.

Activists had accused the Iranian authorities of being in the throes of a crackdown even before the protests began. Two of the country's most acclaimed filmmakers Jafar Panahi and Mohammad Rasoulof were among those arrested.    (AFP)

END_OF_DOCUMENT_TOKEN_TO_BE_REPLACED
Social media
and networks
Subscribe to our
newsletter