The West is fascinated by the recent alleged attempt to assassinate the President of Iran. But the regime of Ahmadinejad and Ali Khamenei has much bigger problems, Iran expert Rudolf Chimelli points out in his commentary 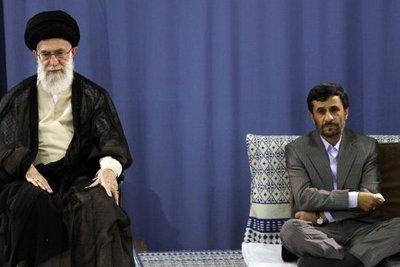 "Theological absurdities": More and more leading Iranian clerics are turning away from the rulers. The regime is reacting with violence and persecution. Pictured: Mahmoud Ahmadinejad and Ayatollah Chamenei at Ahmadinejad's inauguration ceremony in parliament

​​ When Mahmoud Ahmadinejad is around, even a firecracker going off can prompt suspicions of an assassination attempt. And even though Iran is still years away from having the technology to build an atom bomb – anything but a firecracker – opinion leaders in the West are all held in thrall by this one single theme.

Meanwhile, the major problem inside the Islamic Republic is its legitimation crisis. And not only since last summer, when protests against the re-election of the President had to be violently suppressed. The regime can break all the fever thermometers, but that won't reduce the patient's temperature.

Political polemics aside, there is irrefutable data demonstrating that the majority of Iran's 75 million inhabitants are not doing well. Unemployment and inflation are measured in the double digits. Average life expectancy has fallen by six years in the three decades since the revolution.

Around one in three marriages ends today in divorce, even in the countryside, where separations used to be virtually unheard of. The number of drug addicts is estimated at four-and-a-half million, even though dealers are frequently put to death in the course of draconian crackdowns.

Out on the streets, the opposition movement has lost the battle. The overwhelming power of the police, militias and thug squads, or perhaps even more so the horrible travails experienced by those arrested during interrogations and in prison, impede the emergence of any sort of organised protest. Never before has censorship been this oppressive and widespread, from print media to the Internet.

Esteemed journalists are now sitting in jail, and some of Iran's foremost student leaders are on a hunger strike. Little noted by the outside world, labour conflicts both large and small are breaking out all over the country. Leaders of illegal trade unions have in some cases been behind bars for years, like the organiser of Tehran's bus drivers, Mansur Osanlu.

Winning neither hearts nor minds

Many of the disgruntled no longer want to risk life and limb and are withdrawing into the private realm instead. But that doesn't mean that Ahmadinejad and Supreme Leader Ali Khamenei have succeeded in winning hearts and minds. There is not a single prominent writer, artist or film director who endorses the current government. 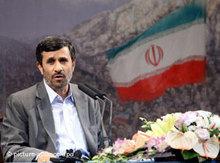 Populist Ahmadinejad: The regime spreads a climate of intellectual paucity, but graver still for the supposed theocracy is the fact that ore and more leading clerics are turning their backs on the state leaders, writes Chimelli

​​ The regime spreads a climate of intellectual paucity, but graver still for the supposed theocracy is the fact that more and more leading clerics are turning their backs on the state leaders, some of them so publicly that they are even experiencing violent reactions.

The home of Grand Ayatollah Hassan Sanei, who once said that the Islamic Republic was as remote from Islam as the moon from the earth, was recently ransacked by mobs. "Death to anyone opposed to the rule of the religious leader!" they yelled as they went about the contract job.

Rule by a religious legal scholar (velayat-e-faqih) is the foremost principle of state in Iran, making the Supreme Leader the highest of all authorities – an absolute ruler – in the so-called republic. But fewer and fewer Iranians believe that Khamenei, a mid-ranking cleric without theological credentials, has the requisite qualities as described in the constitution: "just, pious, courageous, adept, in step with the times and a good administrator". Especially damaging is his loyalty to Ahmadinejad.

Governance by the supreme religious leader

There are only about twenty grand ayatollahs in the Shiite world. For their followers, they are authorities in all life issues, revered as "sources for emulation". Only two of these respected figures were in favour of instituting a leadership principle that mixed faith with politics in an incompatible manner. Other high clerics did not mince words later when stating their opinions on the practice. 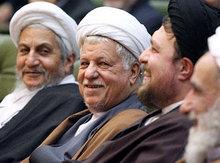 "The Islamic Republic is as remote from Islam as the moon is from the earth", said Ayatollah Sanei, here on the left next to Ayatollah Rafsanjani

​​ Before being arrested in 2006, Ayatollah Kazemeini Boroujerdi had called the Islamic Republic "a conspiracy against God and the faithful". Ayatollah Jalaleddin Taheri Khorramabadi already spoke years ago of a "government of the corrupt, for the corrupt, by the corrupt".

In order to arm himself against the criticism of better qualified colleagues, Khamenei recently had his sovereignty confirmed in a fatwa issued by the regime-friendly Ayatollah Naser Makarem Shirazi.

Rift between religion and state power

According to this religious dictate, the commands of the Supreme Leader, the highest religious and state authority in Iran, must be obeyed even by grand ayatollahs. A statement issued by Khamenei's office underscored that as long as the Twelfth Imam of the Shiites has not yet returned from the Occultation to save humankind, Khameini is his earthly deputy, and that of the Prophet Mohammed. Khamenei has hence defined his role.

In the face of such theological absurdities, it's only a matter of time before the conflicts with the Shiite clergy escalate. For the Iranians, most of them still believers, the rift between religion and state power is growing deeper. But that doesn't mean the regime will be toppled anytime soon. Its secret creed has long been: We have the power and we want to keep it, along with all the privileges it entails.

Rudolph Chimelli is an expert on the Middle East and longstanding correspondent for the "Süddeutsche Zeitung" newspaper.

The Green Movement in Iran
A Divided Coalition
The Green movement in Iran is still hoping that its tactic of applying pressure on the government from below, while negotiating at the top, will produce results, and that the government will show willingness to compromise. But the Iranian writer Faraj Sarkohi believes that the options remain limited for a movement which seeks to reform the despotic regime from within

END_OF_DOCUMENT_TOKEN_TO_BE_REPLACED
Social media
and networks
Subscribe to our
newsletter