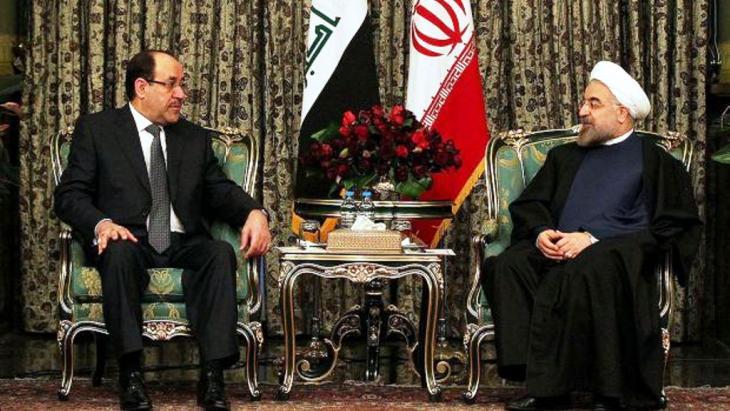 Iran's role in the Iraq conflict
An ally, but not a puppet

For many Sunnis in Iraq, the country's Shia prime minister, Nouri al-Maliki, is a puppet of Iran. In the West too, the view that Tehran is pulling the strings in Iraqi politics is widely held. But what influence does Tehran really have in Iraq, and what role is it playing in the current crisis? Answers from Ulrich von Schwerin

When Iranian President Hassan Rouhani assured Iraq's beleaguered Prime Minister Nouri al-Maliki of his "full support" in the fight against terror only days after the capture of Mosul and the surrounding province of Nineveh by the jihadist group ISIS, many Iraqi Sunnis felt confirmed in their conviction that the Shia Maliki was a puppet of Tehran and the fight against the government in Baghdad was therefore a battle against "Iranian dominance" in Iraq.

But how close are relations between the neighbouring states in reality? "No one will deny that Iran really is influential in Iraq," says the Iran expert Walter Posch of the German Institute for International and Security Affairs (SWP) in Berlin. Yet those who consider Maliki a submissive henchman for Iran are overestimating Tehran's influence and overlooking how profound the differences are, he adds.

Of course Iran has a strong interest in the Shia remaining in power in Baghdad and its neighbouring country not becoming a threat to Iran again. Shia from the two countries have had strong ties throughout history, with hundreds of thousands of Iranians making pilgrimages to the holy sites in Najaf and Karbala every year. Many Iranian clerics studied at Iraq's religious schools, and during Saddam Hussein's regime, many Iraqis from the Shia opposition went into exile in Iran, where they founded the Supreme Council for the Islamic Revolution in Iraq with Tehran's support. 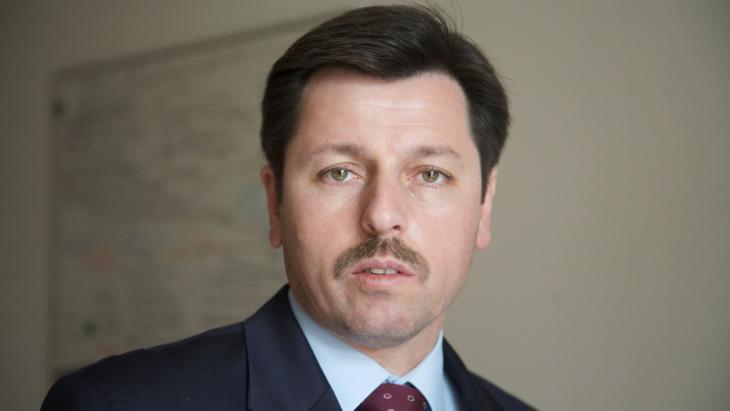 According to Iran expert Walter Posch (pictured here), if Maliki enraged Sunnis with his pro-Shia policies, it is not the result of Iran's influence in Baghdad, because Tehran has always pushed Maliki to integrate the Sunnis

However, Maliki was never part of this pro-Iranian opposition, but belongs to a rival wing of the Dawa party, says Posch. Although he spent several years in Iran, the expert explains, he is not a pronounced "friend of Iran". When he was appointed prime minister, he was considered the compromise candidate, one who would also be acceptable to the Sunnis. Since taking office in 2006, Posch states, Maliki has by no means pursued a one-sided pro-Iranian policy.

In general, observers should not overlook the fact that the national interests in question are very different. In addition, the Iraqis – be they Sunni or Shia – are first and foremost Arabs, while the Iranians are Persians, with their own language, culture and identity. This was painfully brought home to both sides during the Iran–Iraq War, when Tehran's hope of an uprising by Iraqi Shia proved just as false as Saddam Hussein's expectation that the Sunni Iranians would support his invasion.

For this reason, says Posch, Iran is not pursuing denominational policies today. Instead, he says, it is concentrating on being perceived in the region as an Islamic state that champions all Muslims, regardless of their denomination. If Maliki has since taking office in 2006 enraged Sunnis with pro-Shia policies, Posch explains, then it is not primarily down to Iran, which has always pressured him to integrate the Sunnis. 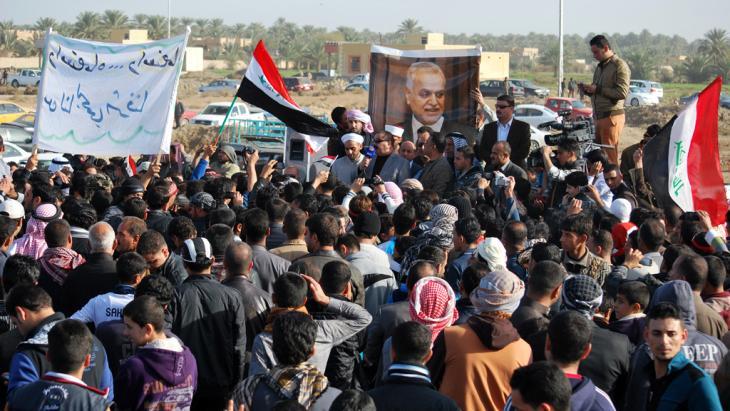 Polarisation instead of reconciliation: in the eyes of many of Maliki's opponents, the Iraqi prime minister and his predominantly Shia government have systematically discriminated against the Sunnis over the past eight years, thereby paving the way for the current crisis

Many Sunnis consider themselves disadvantaged by the Shia-dominated government. They complain that during the process of de-Baathification, i.e. when the army and authorities were cleansed of members of the former ruling Baath party, Sunni officers and civil servants were hit particularly hard. Sunni civilians also complain of being constantly subjected to random checks and arrests by the mainly Shia security forces, on the pretext of the war on terror.

When Maliki last year targeted leading Sunni politicians for alleged terrorist offences, Sunni parties and tribes came together in a counter-movement. Protest camps were pitched in Hawija, Ramadi and other towns. Yet instead of responding to their more-than-justified demands, Maliki defamed the demonstrators as terrorists and had the camp in Hawija cleared by force in April 2013. The Ramadi protest camp was then also broken up by the army at the end of December.

The ISIS fighters' lightning offensive, capturing the city of Mosul and other areas in a matter of days, would not have been conceivable without the support of other Sunni groups. The jihadists also had support from Sunni tribal warriors when they captured Fallujah and parts of Ramadi in January. What is widely seen as an ISIS offensive is, therefore, also a Sunni uprising against national policies, which they regard as a deliberate exclusion of their community.

Many Sunnis stress that their fight is also against Iranian dominance – but accusations of this type can safely be understood as an attempt to discredit Maliki as a puppet of a foreign power. By the same token, Iran's revolutionary leader Ayatollah Ali Khamenei has been "anxiously endeavouring", as Posch puts it, to present the escalated conflict as a struggle against the Takfiris – the radical Salafists and jihadists who declare all Muslims heretics if they do not share their narrow-minded interpretation of Islam. 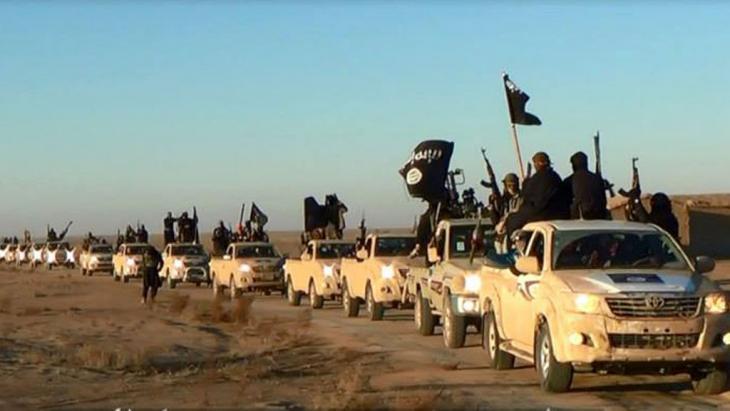 Support from Sunni groups and tribal leaders: "what is widely seen as an ISIS offensive is, therefore, also a Sunni uprising against national policies," writes Ulrich von Schwerin

No Iranian boots on the ground

Posch's assessment is that Iran will not under any circumstances send in its own troops, so as not to provoke the Sunnis any further. The expert does not consider reports on Iranian units in Iraq to be credible. The Al-Quds brigades – the elite Revolutionary Guard units responsible for extraterritorial operations – are certainly active in Iraq, he says, but their operations are restricted to training troops. The Iranian secret service is also very much present in the neighbouring country, adds Posch, but then again, it is not the only one.

In view of the jihadist offensive, Iran is likely to increase support for developing Shia militias, Posch believes, but at the same time make sure it keeps its own volunteers under control. Tehran will not send its own tank units, he is convinced. In the meantime, even the US Defence Ministry has admitted that there is no sign of large Iranian units in Iraq. Moreover, the Tehran government has publicly ruled out sending troops.

While Iran is holding back, another player has entered the fray. In reaction to the jihadists' advance on the holy Shia town of Samarra, the highly respected Shia Grand Ayatollah Ali al-Sistani has called on his fellow believers to take arms to defend the holy sites. Al-Sistani has thus seized the reins from Iran and shown who is the real authority in Iraq, says Posch. "And that is not Ayatollah Khamenei."

Home
Print
Newsletter
More on this topic
Nouri al-Maliki and the Iraqi crisis: Not the right guy for IraqISIS and the Iraqi government: In the grip of the jihadistsFlood disaster in Iraq: Water as an instrument of war
Related Topics
Hassan Rouhani, 'Islamic State' | IS, Jihadism | Jihadists, Nouri al-Maliki, Sunni Muslims | Sunni Islam
All Topics

Short movies nominated for an Oscar often don't get wide public attention. But when one is about an Iranian girl seeking freedom from male domination by taking off her veil, ... END_OF_DOCUMENT_TOKEN_TO_BE_REPLACED

World-famous Iranian film director Jafar Panahi has been incarcerated for several months, even though Iran's Supreme Court overturned the verdict against him. Now, he has gone on ... END_OF_DOCUMENT_TOKEN_TO_BE_REPLACED

Young women are driving forward the protests against the Iranian regime, which have been going on for months. Literature provides clues as to why that should be, and why the ... END_OF_DOCUMENT_TOKEN_TO_BE_REPLACED

Visiting the country of her parents, murdered by the Iranian regime in 1998, German-Iranian artist Parastou Forouhar finds a changed society: hopeful, strong and courageous, ... END_OF_DOCUMENT_TOKEN_TO_BE_REPLACED

Ballet performances are prohibited in Iran. In her film "1001 Nights Apart", director Sarvnaz Alambeigi documents the history of dance in the Islamic Republic. By Fahimeh Farsaie END_OF_DOCUMENT_TOKEN_TO_BE_REPLACED

END_OF_DOCUMENT_TOKEN_TO_BE_REPLACED
Social media
and networks
Subscribe to our
newsletter