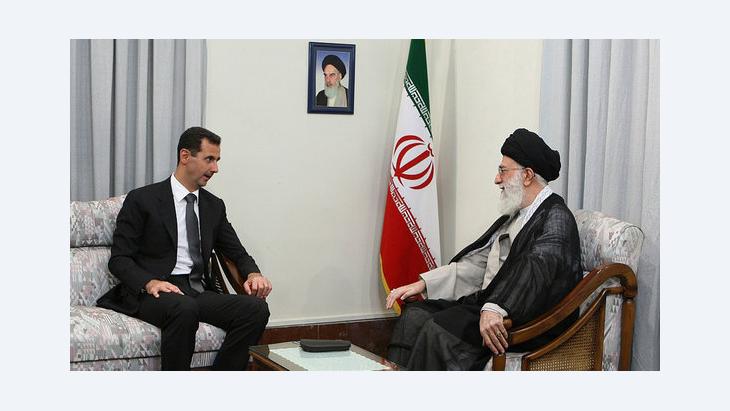 ﻿As the military situation has grown more and more difficult for Syria's Baath regime, Iran has become an irreplaceable ally for President Assad. The mullahs have succeeded in extending their influence in Damascus and building up a network of militias in Syria. Birgit Svensson reports

﻿When Syrian President Bashar al-Assad appeared on television to say that Damascus has the means to strike back, he did so standing alongside a member of the Iranian Security Council. For his part, Iran's deputy foreign minister, Hossein Amir Abdollahian, predicted that Israel's attack on Syria will have "grave consequences" for the city of Tel Aviv.

This performance made it perfectly clear just who will be striking back. Bashar al-Assad no longer has the power to really do so on his own. In fact, it appears that the leadership in Tehran is already pulling the strings in Damascus, even though the Syrian dictator never tires of emphasising that he will not tolerate anyone getting involved in the domestic affairs of his country.

But Iran is already heavily involved and not only since Israel's recent bombardment of an as yet undefined target in Syria either. Syria claims that a military research laboratory was hit; the USA says it was a weapons convoy. One aspect, however, is not disputed by either side: Iranian citizens were among the dead.

Party to the Syrian civil war 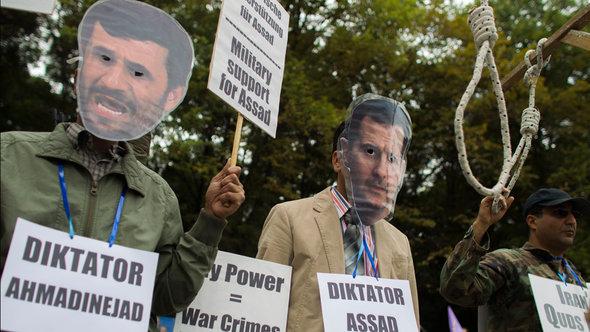 Iran's President Ahmadinejad as the man in the shadows pulling strings behind the scenes in the Syrian civil war: exiled Syrians and Assad opponents demonstrate outside the US embassy in Berlin

​​It is no secret that the Islamic Republic has been helping the Syrian regime ever since the start of the rebellion almost two years ago. As events have unfolded, this help has grown and grown. While it was initially a case of covert deliveries of technology and weapons, the dispatch of military trainers and political advisors and the provision of secret intelligence, Tehran is now openly a party to the Syrian civil war.

Special units of the "Iranian Republican Guard" (IRG) are fighting shoulder to shoulder with the Syrian army against the insurgents. But it doesn't end there: according to well-informed sources in Baghdad, the plan is that regular members of the Iranian army's infantry will serve in Syria, replacing the soldiers who have defected from the Syrian army.

They will be transferred from Iranian Azerbaijan and Iranian Kurdistan near the border with Iraq to Syria. There, they will not fight on the front line, but will instead guard weapons depots and be tasked with the upkeep of military bases.

The best evidence of the presence of Iranian personnel in Syria are the 48 men that were kidnapped by rebel groups in Damascus in September 2012 and were only released in early January 2013 in exchange for 2,000 members of the opposition being held in Syrian prisons. The Syrian government described the Iranian hostages as Muslim pilgrims; the hostage-takers, however, claimed that they were members of Tehran's Republican Guard.

In the meantime, an IRG commander, General Salar Abnoush, openly admitted in an interview with an Arab newspaper that Tehran is "training the Syrian security force and secret service". 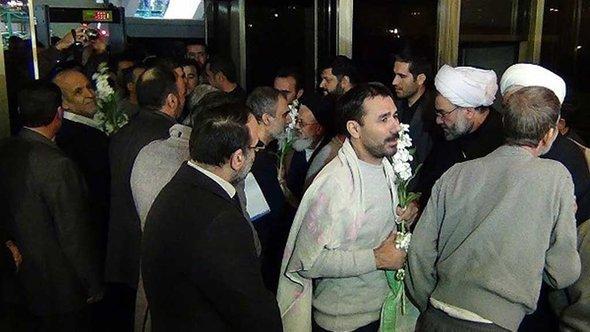 In the biggest exchange of prisoners since the start of the civil war, Syrian rebels released 48 Iranians, who had been kidnapped in Syria in January 2013. In reply, the Syrian security forces agreed to release over 2,000 prisoners

​​Iran, he said, is "involved in fighting every aspect of a war, a military one in Syria and a cultural one as well." The General did not explain what he meant by "cultural". One can safely assume that he did not mean pilgrims. It is more likely that he was referring to members of the al-Quds Force, which also operates in Syria.

According to American intelligence, the most powerful man in Iran, Ayatollah Ali Khamenei, met with the Iranian Security Council in order to discuss what should happen if the Syrian regime were to fall.

It is said that Khamenei issued commands for the al-Quds Force to carry out operations against the West and its Allies, because of their support for the Syrian opposition. He is quoted as saying that Tehran could not just stand by while its national security was under threat. He appointed Major General Qassem Suleimani, commander of the al-Quds Force, as the contact person for Syrian President Assad, so that they could crush the rebellion together.

The al-Quds Force is a special unit within the Iranian Revolutionary Guards (Pasdaran) and is responsible for carrying out extra-territorial operations. The Arabic word "Quds" means "Jerusalem". The force is very well known in Iraq.

In accordance with their mission to support forces allied with Iran, the members of the force have really been pushing the advancement of the Shia community in Iraq. They have used every possible means at their disposal to reach this end. It is said that members of the al-Quds Force were involved both in attacks on US forces and later also in the bloody confrontations between Sunnis and Shia.

Suleimani is also a well-known figure in Iraq. The US administration put him on its terrorist list. Nevertheless, it is said that there were secret meetings between him and high-level US functionaries in the office of Iraqi President Jalal Talabani, something that the Americans consistently deny. The British broadsheet The Guardian once referred to Suleimani as the Iranian general who is "secretly running" Iraq. It is no surprise, therefore, that he is now being dispatched to Syria. 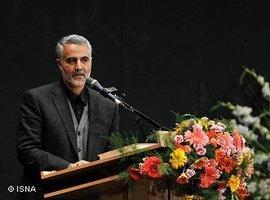 Teheran's strong man in the Syrian conflict: Qassem Suleimani, commander of the al-Quds Force, the special unit of the Iranian Revolutionary Guards (Pasdaran) for extra-territorial operations

​​In 2006 – while war raged in Iraq and US President George W. Bush referred to both states as "rogue states" in the Axis of Evil – Syria and Iran concluded a mutual defence pact. Since then, Iran has continually expanded its influence in the region and established the so-called "Shia crescent": from Iraq and Syria to Hezbollah in Lebanon and Hamas in Palestine, Tehran has steadily increased its sphere of influence.

An "Axis of Resistance" to the West

For this reason, the Islamic Republic views the uprisings in Syria as a surrogate war with the USA, Israel and other Western states, which would otherwise increase their influence in the Middle East.

This is why the leaders in Tehran see their alliance with the Alawite regime in Syria and the Shia Hezbollah in Lebanon as the "Axis of Resistance" to the West.

"It is no exaggeration to say that Iran is one of the supporting pillars of the Syrian regime," says Loay Safi, member of the opposition Syrian National Council. "Tehran is supplying Damascus with political, technical, military, intelligence, and financial support. The consequence of this is that Iran is increasingly trying to take control of a variety of political initiatives."

It would not, therefore, be surprising if the al-Quds Force were to live up to its name and to set its sights on storming Jerusalem. Through their involvement in Syria, they are already dangerously close to Israel.

Home
Print
Newsletter
More on this topic
Syria and Iran: Two Lone FriendsHezbollah and the Uprising in Syria: Can the ''Party of God'' Weather the Arab Spring?The Shia-Sunni Conflict: The Most Deadly Religious War of our Time
Related Topics
Arab Spring, Arabellion, Assad regime, Syrian Civil War
All Topics

They’ve already got the Louvre; they’ll soon have a Guggenheim Museum as well – and now the Emirates have added literature to their quest for cultural supremacy in the Arab world ... END_OF_DOCUMENT_TOKEN_TO_BE_REPLACED

By stage-managing his re-election in a poll widely dismissed as a farce, Syria's President Bashar al-Assad has killed two birds with one stone: he has forced his compatriots to ... END_OF_DOCUMENT_TOKEN_TO_BE_REPLACED

In Islamic mysticism, Ramadan is more than just a period of prescribed abstinence, signifying an opportunity for inner contemplation. Marian Brehmer explores the spiritual ... END_OF_DOCUMENT_TOKEN_TO_BE_REPLACED

Syria's president appears to have triumphed. He remains in power, the Syrian conflict is nearly over, and efforts are underway in the Arab world to normalise relations with his ... END_OF_DOCUMENT_TOKEN_TO_BE_REPLACED

The neo-Ottomanism propagated by Erdogan has long been more than rhetoric and symbolic politics. This can be seen from recent developments in parts of northern Syria, where Turkey ... END_OF_DOCUMENT_TOKEN_TO_BE_REPLACED

Surging coronavirus cases in many parts of the world have overshadowed the start of this year's Muslim holy month of Ramadan, with festivities once again curtailed by contagion ... END_OF_DOCUMENT_TOKEN_TO_BE_REPLACED
Author:
Birgit Svensson
Date:
Mail:
Send via mail

END_OF_DOCUMENT_TOKEN_TO_BE_REPLACED
Social media
and networks
Subscribe to our
newsletter