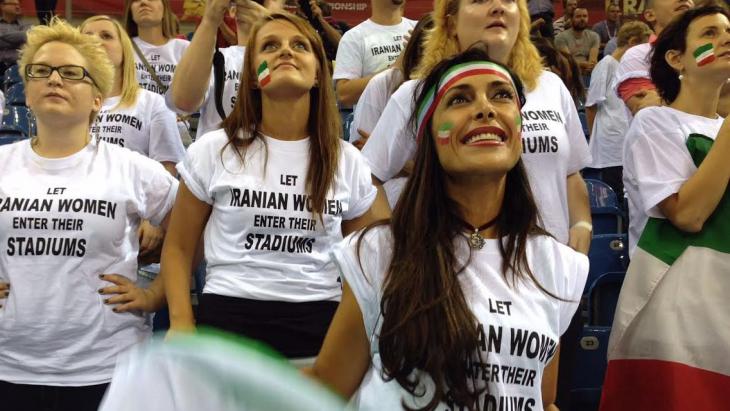 Iranian women′s rights activist Darya Safai fights the stadium ban for Iranian women from her exile in Brussels. An interview on her protest during the Olympic Games in Rio, the hypocrisy of international sports organisations and Ali Khamenei′s unreformable regime. By Kai Schnier

Ms. Safai, for years you have been travelling through Europe and around the world attending volleyball and football matches involving Iranian national teams. It is part of your struggle for the rights of Iranian women. What does the one have to do with the other?

Darya Safai: I am protesting against the stadium ban on women, which prohibits Iranian women from visiting public sports events. Instead of protesting in American, French or Turkish arenas, it would of course be more powerful to protest in Iran itself, but I fled from Tehran to Brussels in 1999. I had been sentenced to serve a two-year sentence in prison for taking part in the student protests back then. That is why I founded the organisation ″Let Iranian women enter their stadiums″ – it′s a means of trying to exert pressure from the outside.

Why have you chosen specifically to protest against the stadium ban?

Safai: For two reasons: one, ever since I watched the 1997 qualifying match for the Football World Cup between Iran and Australia, I have been sports-mad myself. When Iran scored the crucial goal in the 80th minute, all of Tehran was in a frenzy. I was out on the streets, partying with hundreds of people, hugging my neighbours. Even back then I thought: why can′t women experience this inside a stadium as well? Secondly, I believe that by protesting the stadium ban, we can – by extension – be seen to be opposing all forms of discrimination against women in Iran. 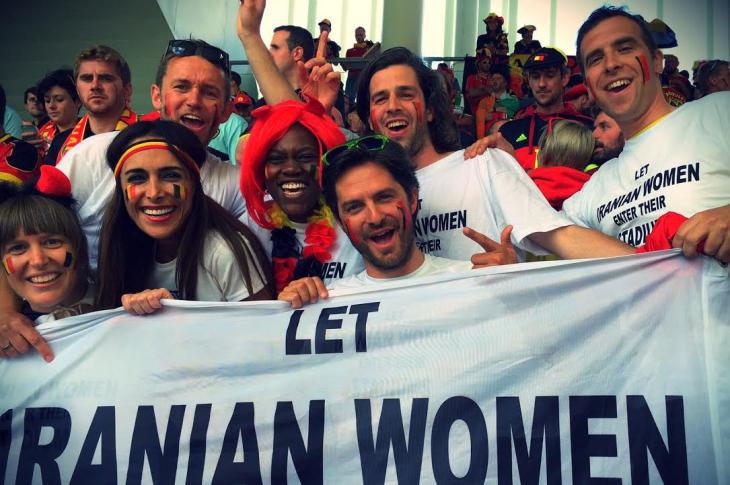 Darya Safai also used the 2016 European Cup in France to draw attention to the women′s rights situation in Iran. From exile in Belgium, she fights for the right of Iranian women to enter stadiums. Here you can see Darya Safai surrounded by Belgian fans during the ″Red Devils″ game against Ireland′s national team

Safai: Sports arenas are nothing but mirror images of the societies in which they exist. People cheer and suffer there together, they feel a sense of belonging or the opposite. The fact that Iranian women are banned from this public space and from participating in such experiences, is emblematic of their societal marginalisation, which does of course apply to many spheres other than sports. A couple of years ago, 67 percent of Iranian students were female, a trend that was gradually increasing. Then the regime introduced a quota system that brought this number down to 50 percent. Many universities have struck courses in women′s and gender studies from their curricula.

Most recently, you took your campaign to the Olympic Games. During a men′s volleyball match played by the Iranian team in the Maracanazinho arena in Rio de Janeiro you held up a protest banner. It wasn′t well received…

Safai: In a matter of minutes I was surrounded by security personnel and Brazilian soldiers. An Iranian fan shouted at me from behind, telling me to stop being a disgrace to my country. They tried to take my banner away and remove me from the stands.

Thanks to the objections of other fans and journalists you were finally permitted to remain inside the arena. Your protest was covered by international media. Was it a success after all?

Safai: In retrospect it was a success, yes. I even visited the last three games of the Iranian team and held up my banner there as well. Still, I was in tears at the time. It was a tragic moment for me, because it symbolised the inaction of international sports organisations with respect to discrimination. The Olympic Committee, FIFA, the international volleyball federation FIVB – all of these institutions pledge that they fight for anti-discrimination and gender equality. Yet they do the opposite: they prevent any controversy to gain momentum.

Do those organisations also turn a blind eye to the situation in Iran?

Safai: They simply evade the issue altogether. When asked about the stadium ban for women they always talk about ″cultural paradigms″, which they won′t and can′t take on. That is a very bad excuse, because these alleged ″paradigms″ do not exist. The stadium ban has neither a cultural or historical dimension. There were times when a third of the volleyball fans at a match at Tehran′s Azadi Indoor Stadium – which literally translates into ″Freedom stadium″ – were female. There is not even an explicit law that prohibits women from visiting public sports events. So the ban exists for one reason only and that reason is neither cultural nor historical, but political. Ali Khamenei and his regime want to curtail women′s rights further and further, in accordance with their religious convictions.

Are you especially disappointed by Hassan Rouhani, who after the presidential election of 2013 was hailed by many observers from home and abroad as a reformer and a leader who would embrace a more open Iranian society?

Safai: With regards to women′s rights, Rouhani′s term has indeed been a huge disappointment, especially because he made many promises in 2013, which included the potential easing of the stadium ban. Only in May a fifteen-year-old girl was arrested for dressing up as a boy and entering the Azadi arena to watch the final match of the Iranian football season. In July, the regime promised that women could purchase tickets and attend the international volleyball matches again, but when the online sale began, a ″sold out″ alert appeared. So the problems have not changed. Still, I am not surprised by Rouhani′s negative track record.

Safai: It was Rouhani, who in 1999 as an advisor to the Supreme National Security Council, ordered the quelling of the student protests – in direct contradiction to his reputation as a reformer. Besides, the hopes that many people placed on the presidential elections in Iran were divorced from the real world right from the start. As with all the presidents who came before him, Rouhani is a puppet controlled by Khamenei. 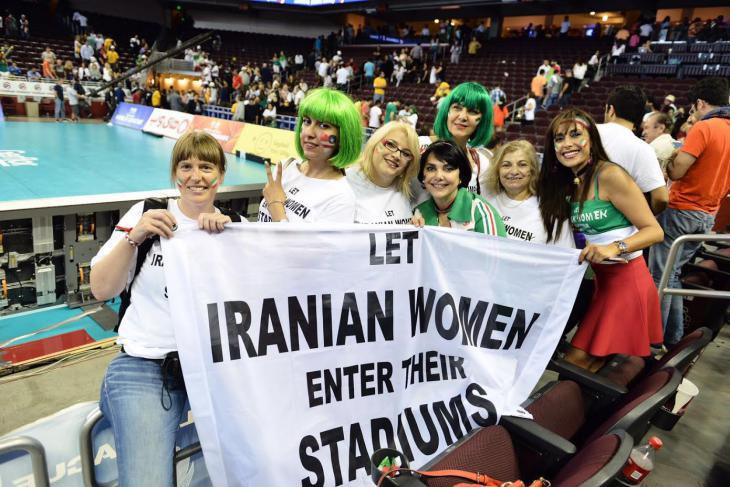 ′No protests please′, the motto of this year′s Olympic Games in Rio: "In a matter of minutes I was surrounded by security personnel and Brazilian soldiers. An Iranian fan shouted at me from behind, telling me to stop being a disgrace to my country,″ reports Darya Safai. "They tried to take my sign away and remove me from the stands"

Given the situation, do you still hope that women′s rights in Iran will improve and that your goal, a lift of the stadium ban, can be achieved?

Safai: I remember one day at school in Tehran, when I was ordered to the principal′s office, because I had laughed loudly about a friend′s joke in the school yard. ″Good girls don′t laugh loudly,″ he said. That was a trauma for me. The photos of that time never show me smiling. But look at me now. I can laugh again. What I am trying to say is: sometimes change takes longer than you wish, but it always happens eventually.

What would have to be done to speed up that change?

Safai: There would need to be a broader political and societal push for gender equality and anti-discrimination in Iran. When it came to Iran′s nuclear programme, international actors worked together to induce Khamenei and his regime to change their minds by engaging in negotiations and applying sanctions. And finally it worked. It would be great if similar pressure could be exerted concerning women′s rights in Iran. Then you′d soon see women like me on the stands of Iranian stadiums again.

Home
Print
Newsletter
More on this topic
Women′s rights in Iran: "Now it's the men's turn"The Documentary Film ''In the Bazaar of Sexes'': Temporary Marriage in IranFamily policy in Iran: Children for the revolution50 years of women's voting rights in Iran
Related Topics
Muslim women, Sport, Women in the Islamic world
All Topics

The European Union's top court has deemed kosher and halal slaughter incompatible with animal welfare. This is a grim day for religious freedom in Europe, writes Christoph Strack END_OF_DOCUMENT_TOKEN_TO_BE_REPLACED

One year after the burka ban in the Netherlands, Muslim women are reporting increased discrimination and violence. Adding to the frustration, face masks against coronavirus have ... END_OF_DOCUMENT_TOKEN_TO_BE_REPLACED

At the Goethe-Institutʹs Tashweesh Festival, artists and intellectuals from North Africa, Europe and the Middle East meet to discuss stereotypical gender images. By Caren ... END_OF_DOCUMENT_TOKEN_TO_BE_REPLACED

Belgium has been fighting religious radicalisation since it became painfully obvious that Islamists were operating in the country. Art and humour have become tools in the battle ... END_OF_DOCUMENT_TOKEN_TO_BE_REPLACED

In contrast to other cities in Belgium, violent Islamists have found next to no adherents in Mechelen. This is primarily due to the efforts of Mayor Bart Somers: he demands that ... END_OF_DOCUMENT_TOKEN_TO_BE_REPLACED

Bader has achieved significant acclaim both in Arabic and in translation as an author of philosophical fiction. The Iraqi writer′s twelfth novel, ″Al-Kafira″ (The Infidel Woman), ... END_OF_DOCUMENT_TOKEN_TO_BE_REPLACED
Author:
Kai Schnier
Date:
Mail:
Send via mail

END_OF_DOCUMENT_TOKEN_TO_BE_REPLACED
Social media
and networks
Subscribe to our
newsletter