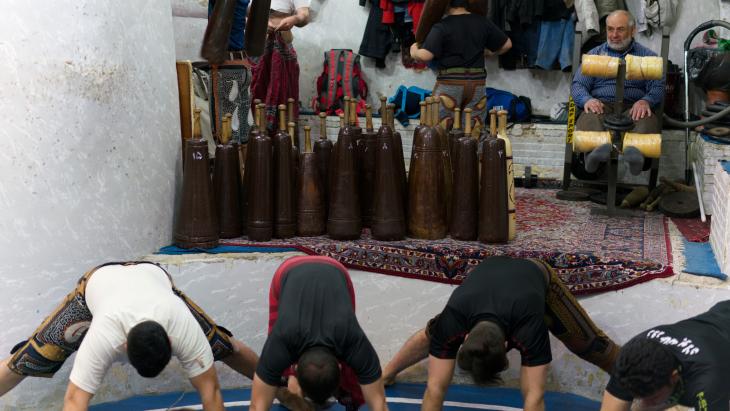 Iran's zurkhaneh bodybuilders
Praying in the house of strength

In Iran, a centuries-old form of strength training that combines athletics and religious ritual is still practiced to this day. Reporting for Qantara.de, Marian Brehmer paid a visit to one of these ancient "houses of strength" in Shiraz

Walking through the bazaar in the Iranian city of Shiraz after work has finished for the day, you will hear muffled drumbeats emerging from underground into the dark market lanes. They seem to originate from behind an illuminated front door. Following the rhythmical boom, the visitor descends a steep staircase that leads underground, into a brightly lit basement room.

The percussionist – who is known as a morshed, which is also the name of a Sufi master – sits on a dais, moving his fingers deftly over a frame drum. Now and again, his arm will shoot out to strike one of four bells that dangle from a rod in front of him. The beats are exactly in time, because under the painted white dome of the basement roof, people are exercising to them.

In an octagonal arena, a dozen men are doing press-ups with their legs wide apart. Some of them are wearing embroidered leather breeches; others have a loose cotton cloth wrapped around their hips. Their hands grip long wooden boards that they have placed on the floor in front of them. With every beat, the athletes dip, straight-backed, towards the floor and then push themselves up again, grimacing with the effort.

These men are members of a zurkhaneh, a kind of Persian gym that originated in pre-Islamic Iran. The name translates as "house of strength", and it is an institution with deep roots in the country’s history, combining strength training with music, classical poetry, religious devotion and a special form of sports ethics.

You will find zurkhaneh in every urban centre in Iran: there are thought to be around five hundred in total. They are usually set up below ground, to escape the heat and protect the sweating sportsmen from draughts. The men of the zurkhanehs are largely working class – they include bazaar traders, taxi drivers and postmen. But the zurkhaneh is not just a place for physical training; it's a social hub where issues of politics and the economy are discussed. 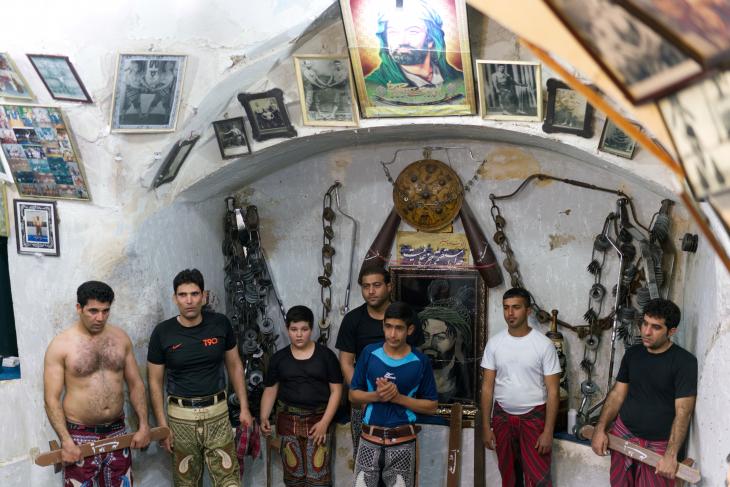 Deep-seated social taboo: women are still not allowed to participate in the zurkhaneh ceremonies, making the sport the last one in Iran still to exclude female athletes. In an effort to be admitted to the discipline, Iranian women launched social media campaigns in 2020, earning fatwas from Shia legal scholars for their pains. But the activists did gain support from prominent athletes such as Hamidreza Kordi, the zurkhaneh club-swinging world champion. He argued that the exclusion of women was one reason the discipline has so far not been included in the Olympic Games

An absence of social distinctions and hierarchies

In the zurkhaneh, exercise is traditionally done barefoot and bare-chested, to symbolise the absence of social distinctions and hierarchies between the athletes. High-tech training tops and jerseys have since found their way into the men's clubs, but the feeling of virtuous brotherhood is still cultivated and passed down to the next generation – in the Shiraz zurkhaneh, at least, the athletes include teenagers, who look up to the more experienced men with great respect.

The sports ethics of the zurkhaneh have their roots in the concept of the "pahlevan", the virtuous hero of Persian mythology, who embodies values such as modesty, fairness, respect for one’s elders, and helping the weak and defenceless. The zurkhaneh communities still take their responsibility to society seriously today. The members often fundraise for local families who have fallen into poverty.

The pahlevan par excellence is Imam Ali, honoured among the Sufis not only as someone who conveyed mystical knowledge, but also for his bravery and high ethical standards. Anecdotes illustrating Ali’s exemplary conduct are often recounted in the zurkhanehs – and so his portrait is an essential item for each house of strength.

Apart from the picture of Ali, the walls of the Shiraz zurkhaneh are hung with black and white photographs of successful athletes from recent decades. After the warm-up, the men bring out huge wooden clubs, which can weigh up to fifty kilograms. Swinging and turning the clubs is regarded as a particularly effective form of strength training, which is practiced in every zurkhaneh; in the Middle Ages, it was part of soldiers’ physical preparation for war.

The morshed sometimes interrupts his drumming to recite a poem from the repertoire of classical Persian poetry – by the mystic poets Hafez and Rumi, perhaps, or from the pen of the national epic poet Ferdowsi. Afterwards, there are hymns of praise to the Prophet Muhammad and his family, while the athletes pause in reverent silence, while taking a moment to catch their breath. Then comes the next series of exercises. Everything is done in a strict ceremonial order that seems to belong to a past age.

Varzesh-e Zurkhaneh-i, (literally, the sport of heroes in the house of power). The ancient Iranian Zurkhaneh gymnasia have their roots in customs and traditions that date back to the country's pre-Islamic past. This selection of early photographs portrays the world of the Zurkhaneh athletes from 1789 to 1925. 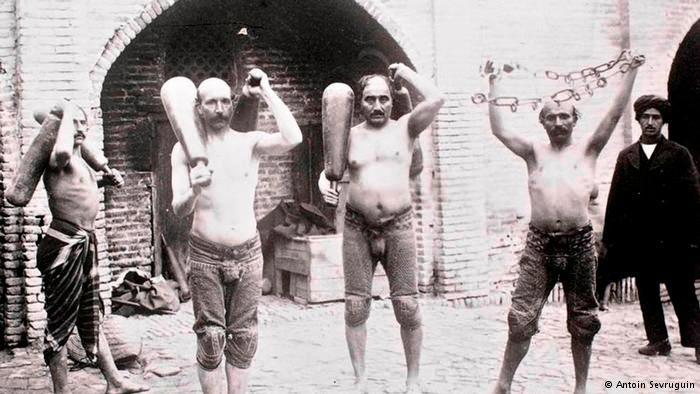 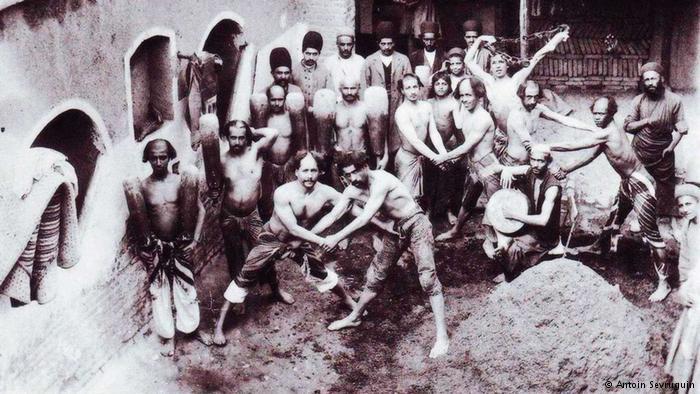 Athletes of the Qajar period. The photographer, Antoin Sevruguin, was born in Tehran in the middle of the 19th century. Son of a Russian diplomat at the embassy in Tehran, he was one of Iran's most celebrated society photographers during the Qajar era 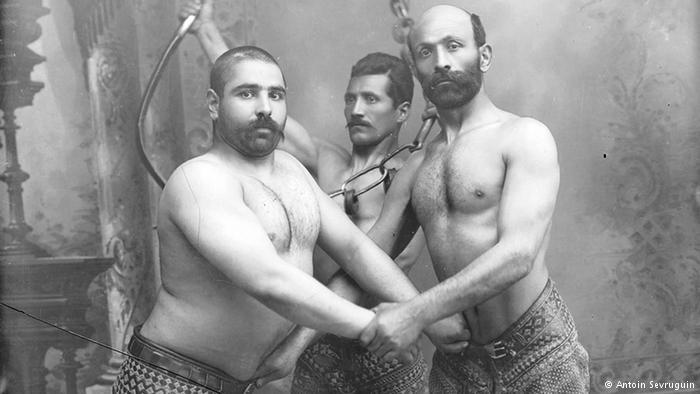 Qajari strongmen: the Zurkhaneh strength training has its roots in ancient Iranian tradition and can be traced back to the Persian Empire and its methods for the training of warriors for battle 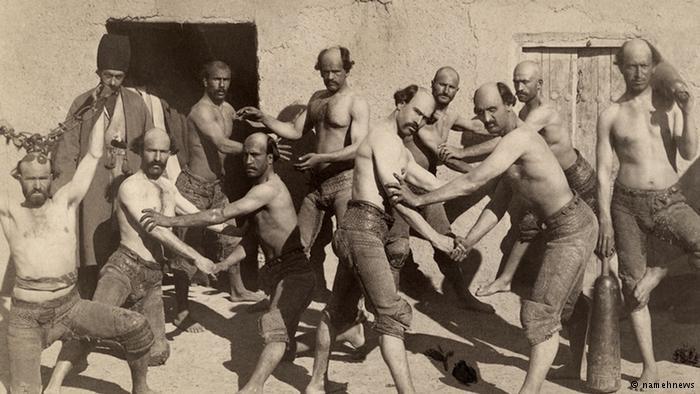 The rituals of Iranian martial arts and Zurkhaneh sport were added to the UNESCO World Cultural Heritage List in 2010 (or 1389 according to the Iranian calendar). The fights are often accompanied by music – in the form of singing, tonbak percussion and rhythmic bell-ringing provided by the "morshed". The "morshed" also recites religious verses and mystical stories 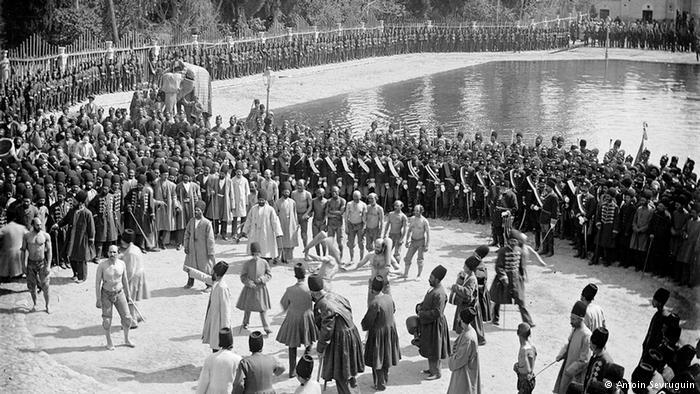 Elite athletes of the Qajar period: Varzesh-e bastani ("the ancient sport") or sport of the house of power underwent a revival in the 19th century, becoming particularly popular during the reign of Qajar ruler, Naser al-Din-Shah (1848-1896) 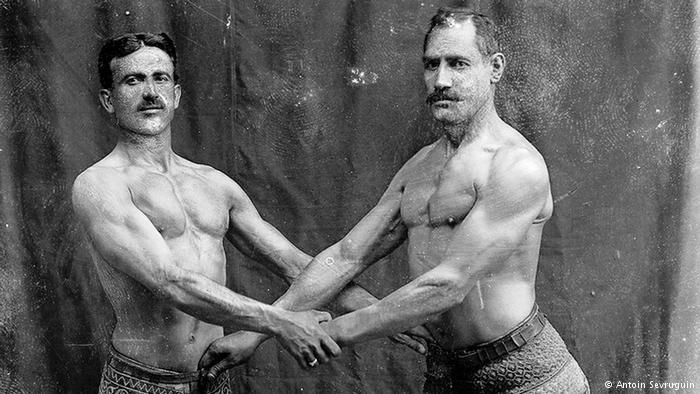 According to a special "Sport" edition of the Brockhaus Encyclopedia, which cites research carried out by the Sport University of Cologne, the Zurkhaneh provided the world's earliest training for body-builders 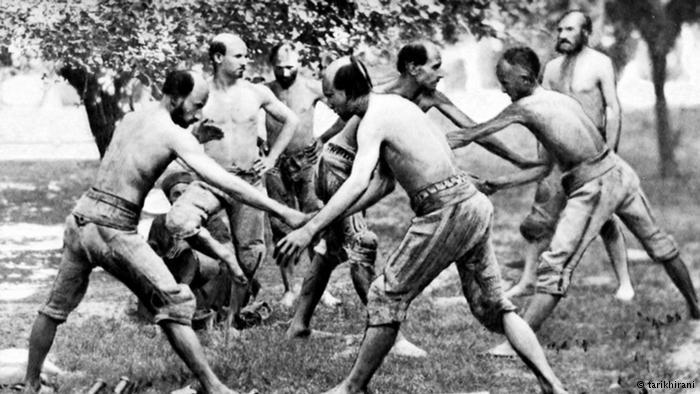 The Iranian Zurkhaneh sport is also to be found in Azerbaijan, Iraq, Turkey, Afghanistan, India ("Indian Club") and several other countries 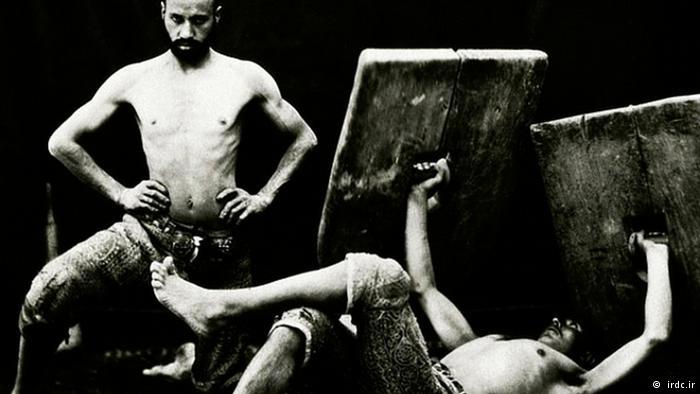 The stones pictured here are symbolic representations of the warriors' shields 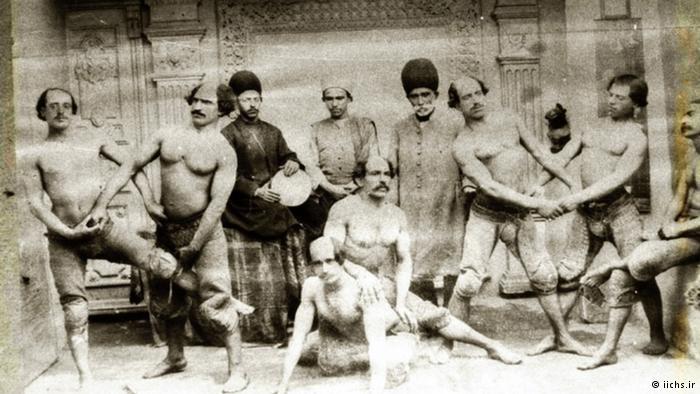 Following the Iranian Revolution of 1979, the sporting activities in the Zurkhaneh were declared inappropriate. Nowadays, however, they have become a symbol of Iranian national pride 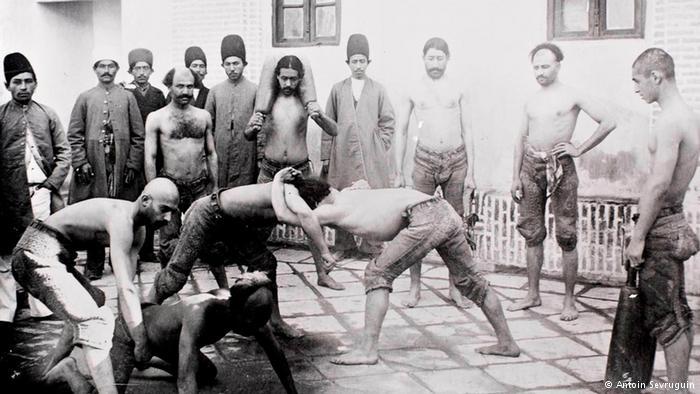 Mil-Bazi (Indian club throwing) is one of the most interesting Zurkhaneh exercises. The skill consists in throwing the clubs into the air in different ways and catching them again. Clubs are thrown in pairs; each pair weighing up to 40kg

All the same, the zurkhanehs still enjoy great popularity in the 21st century, due in no small measure to their power of social cohesion. But the houses of strength also have an image in Iranian society that runs counter to their claim of morality and honour – namely that they are a horde of ignorant thugs who are easily manipulated. One of the leaders of the CIA-backed street fighters on the Shah's side when Prime Minister Mossadegh was toppled in 1953 was a well-known zurkhaneh champion by the name of Shaban Bimokh.

The institutionalisation of zurkhaneh training

Today, emphasising the Islamic character of the zurkhaneh, the Iranian government is attempting to institutionalise the sport by means of a system of associations, championships and records. There is now even an International Zurkhaneh Sport Federation (IZSF), which is tasked with popularising the sport abroad, particularly in the Middle East, South Asia and Eastern Europe.

The house of strength tradition had already undergone some fundamental changes in the time of the Shahs. Wrestling was once an important element of the sport. But with the affiliation of Iranian wrestling to international competitions and the rise of the popular freestyle wrestling, it disappeared from the zurkhanehs. Iranians like to attribute the fact that they excel in international wrestling competitions to their house-of-strength tradition.

But one thing still remains a social taboo: women’s participation in the zurkhaneh ceremonies. And this makes the sport the last one in Iran that has not yet opened up to female athletes. In an effort to be admitted to the discipline, Iranian women launched social media campaigns in 2020 – earning fatwas from Shia legal scholars for their pains. But the activists did gain support from prominent athletes such as Hamidreza Kordi, the zurkhaneh club-swinging world champion. He argued that the exclusion of women was one reason the discipline has so far not been included in the Olympic Games.

Since Ali Khamenei, Iran's most powerful man, has openly and unconditionally come out in support of Putin's war in Ukraine, logistical help is on its way, with an allegedly ... END_OF_DOCUMENT_TOKEN_TO_BE_REPLACED

A sci-fi film lampooning the Islamic Republic and all that its regime holds sacred premiered quietly at a nondescript venue in Los Angeles in July. The title, “Velayatnameh”, is a ... END_OF_DOCUMENT_TOKEN_TO_BE_REPLACED

The Palestinian militant organisation Hamas, with Hezbollah's help, is building up a military presence in Lebanon, the ultimate consequences of which could be devastating, writes ... END_OF_DOCUMENT_TOKEN_TO_BE_REPLACED

With his fist bump greeting for a man he previously called a pariah, US President Biden has paved the way for Saudi Crown Prince Mohammed bin Salman's return to the international ... END_OF_DOCUMENT_TOKEN_TO_BE_REPLACED

Days of protests across Iran followed the collapse of a high-rise building in the city of Abadan in May 2022. But why has the disaster become such a political issue? Rahman ... END_OF_DOCUMENT_TOKEN_TO_BE_REPLACED
Author:
Marian Brehmer
Date:
Mail:
Send via mail

END_OF_DOCUMENT_TOKEN_TO_BE_REPLACED
Social media
and networks
Subscribe to our
newsletter