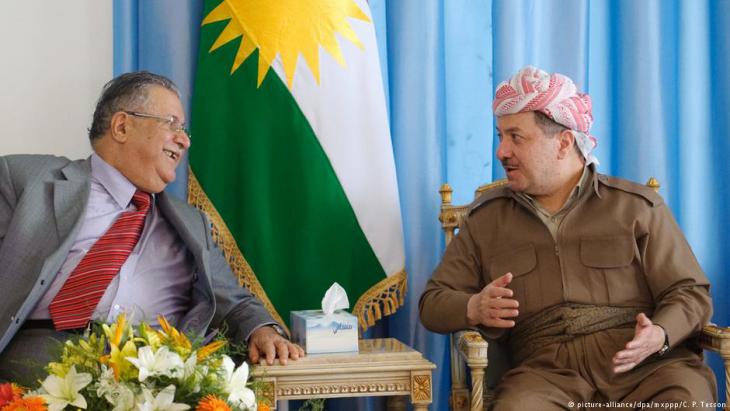 Despite the KRG′s efforts to use the referendum to increase its leverage, fissures within the Kurdish nationalist movement are undermining the Kurds′ bargaining power with Baghdad. This problem is deepened by an enhanced sense of Iraqi nationalism, Baghdad′s gradual rapprochement with Saudi Arabia and Turkey and the KRG′s lack of an independent revenue source

For instance, Gorran insist that the KRG president law be amended and internal political issues resolved before a referendum can occur. Some Kurdish nationalist groups oppose the referendum altogether. Those in the No to the Referendum movement, initiated by independent activists in Sulaimaniya, argue that the referendum is really about extending Barzani′s power and not Kurdish independence.

The newly launched ″No for Now″ channel is encouraging people to vote ″no″ in the referendum. For these groups, the referendum has become as much or more a vote against Barzani-KDP rule and for political reform as it is for Kurdish statehood. Different political priorities and agendas have also split minority groups – such as Yazidis, Assyrians, Sunni Arabs, Turkomans – into pro- and anti-KDP factions. Those who oppose the KRG or KDP generally support Baghdad, or an Iraqi state where they can have greater local autonomy.

Overlapping these divisions are pro-Turkey and pro-Iran factions, which can change based on the issue or territory involved. Indeed, Kurdish opposition voices are unlikely to stifle the referendum or prevent a majority ″yes″ vote. Barzani may face domestic opposition, but most other groups are too weak and fragmented to pose a significant challenge to his authority at this time. Still, internal fissures have reaffirmed divisions between the pro- and anti-KDP camps and enhanced opportunities for violence. Kurdish independent activists who oppose or criticise the referendum have been threatened, arrested and accused of treason.

In reacting to the KRG′s political restrictions and ongoing economic crisis, many Kurdish youth are driven by a sense of hopelessness and not dreams of independence. Some have become apathetic, others seek to migrate and still others are becoming radicalised and joining Salafis or the PKK. These trends are occurring in a hyper-fragmented Iraqi state whereby some non-state actors and their militias are seeking to push back Kurdish territorial gains.

Internal Kurdish dynamics have implications for the referendum and its outcomes. They show that the competition among Kurds can have as much, if not greater influence on self-determination then tensions between the KRG and the Iraqi government. Without KRG political reform and financial incentives, even a ″yes″ vote will challenge stability inside the Kurdistan region and disputed territories.

Fissures within the Kurdish nationalist movement also undermine the Kurds′ bargaining power with Baghdad, despite the KRG′s efforts to use the referendum to increase its leverage. The Kurds′ ability to influence Baghdad is further challenged by an enhanced sense of Iraqi nationalism, Baghdad′s gradual rapprochement with Saudi Arabia and Turkey and the KRG′s lack of an independent revenue source.

Given these realities, the efforts of the United States and international community can fuel or mitigate power struggles and conflict between Baghdad and Erbil, as well as within the Kurdistan region. Avoiding such turmoil would not mean backing a Kurdish referendum at this time, but rather, enhancing institutions of the Iraqi state, supporting Iraqi nationalist narratives that are less ethno-sectarian and helping decentralise power in Iraq, to include the Kurdistan region.

Support to the KRG should continue to be conditional upon its status as an integral part of the Iraqi state – and channelling this support through Baghdad.

Among the 24 squads at the Euros, dozens of players with African roots will turn out in the June 11-July 11 tournament. Several of them are top names at this pan-continental event ... END_OF_DOCUMENT_TOKEN_TO_BE_REPLACED

Reading Hassan Blasim's God 99 is an immersive experience of grief and exaltation, anger and disgust, writes Marcia Lynx Qualey. We join the Iraqi narrator as he sits around in ... END_OF_DOCUMENT_TOKEN_TO_BE_REPLACED

Turkey's parliamentary and presidential elections are scheduled for June 2023. But they are already casting a shadow. While the opposition is calling for early elections, ... END_OF_DOCUMENT_TOKEN_TO_BE_REPLACED

Recep Tayyip Erdogan, disappointed by the European Union’s reluctance to integrate Turkey into its ranks, has re-directed his country’s diplomacy toward the Maghreb and Africa to ... END_OF_DOCUMENT_TOKEN_TO_BE_REPLACED

A law is currently being debated in Morocco that would legalise the cultivation and export of medicinal cannabis. For many small farmers, this would bring considerable advantages ... END_OF_DOCUMENT_TOKEN_TO_BE_REPLACED
Author:
Denise Natali
Date:
Mail:
Send via mail

END_OF_DOCUMENT_TOKEN_TO_BE_REPLACED
Social media
and networks
Subscribe to our
newsletter