Together with his students he started to clean up the buildings that were still standing – without any support from the Iraqi government, which continues to treat anyone who stayed during the occupation with suspicion for having possibly collaborated with IS. At the same time, locals are still afraid of those IS members who went underground. "That's why you hardly see anything relating to the occupation in the arts now," Tariq said. 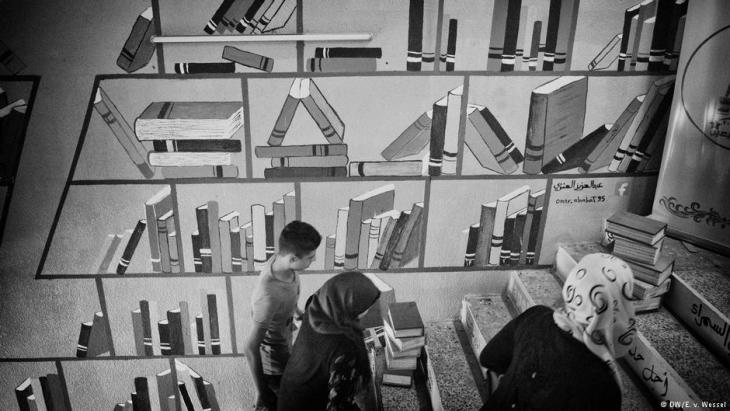 Rescued from a torching by IS: after the fire in the library, Ali al-Baroodi, an English lecturer at the University of Mosul, together with students and other volunteers, recovered some 6,000 books from the ashes. Historian Omar Mohammed, internationally known as the blogger "Mosul Eye", launched an appeal, whereupon thousands of books were sent from abroad to replace the lost ones

And the arts do not seem to be playing a role in helping people come to terms with what happened to them under IS, in contrast to the Kurdistan region of Iraq, where, for instance, a Yazidi artist has created paintings about the fate of his people.

Artists in Mosul found other ways to celebrate their renewed freedom. In May 2017, when the battle was still raging across the river Tigris, which divides the city in two, both al-Baroodi and Tariq were involved in staging an art exhibition in eastern Mosul. There, pictures and paintings were exhibited against the blackened remains of a university building to the sounds of long-banned music.

The "maqama", a classical Arabic form of prose-poetry, is still almost unknown in Germany – as is the name of the 11th-century Baghdad poet Ibn Naqiya. A new translation has the ... END_OF_DOCUMENT_TOKEN_TO_BE_REPLACED

Two and a half years since its liberation from the Islamic State group, large areas of Mosul still lie in rubble. Germany is contributing in a variety of ways to the ... END_OF_DOCUMENT_TOKEN_TO_BE_REPLACED

The assassination of the Iranian general Qassem Soleimani in a surprise U.S. drone strike is being used by the Islamic Republic of Iran to political ends, says Iranian journalist ... END_OF_DOCUMENT_TOKEN_TO_BE_REPLACED

The upheavals of the past year in the MENA region are arguably as momentous as those of the Arab Spring in 2011. Yet perhaps the biggest difference is that our interest seems to ... END_OF_DOCUMENT_TOKEN_TO_BE_REPLACED

For 12 years, Nihad Salim Qoja was the mayor of Erbil, capital of the autonomous Kurdish regions of Iraq. Christopher Resch spoke to the local politician in Erbil about the future ... END_OF_DOCUMENT_TOKEN_TO_BE_REPLACED

Trump’s sweet revenge could swiftly turn bitter, after all the U.S. attack is a direct declaration of war against the Iranian Revolutionary Guard and its elite Quds troops ... END_OF_DOCUMENT_TOKEN_TO_BE_REPLACED
Author:
Judit Neurink
Date:
Mail:
Send via mail