And then there was the action by students, teachers and volunteers to save the books that had survived the fire in the university library.

In the wake of the fire at the university's library, al-Baroodi, along with students and other volunteers, was there to document the salvaging of some 6,000 books from the ashes. Thousands of books would later arrive from abroad to replace those that were lost, thanks to an appeal by historian Omar Mohammed, who had garnered international attention for his work as the Mosul Eye blogger during the occupation.

Music has returned, too, with an oud player giving a concert at the art exhibition and a bass player performing at damaged heritage sites, like the Nouri Mosque with its famous Hadba minaret where IS leader Abu Bakr al-Baghdadi declared the caliphate and which IS destroyed when they were forced out of the city. 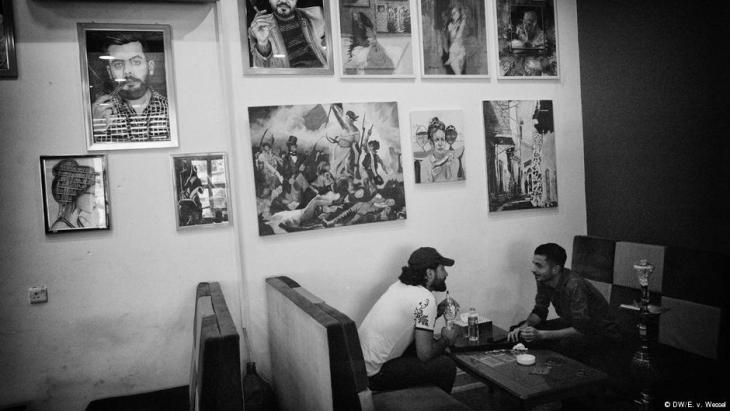 "You donʹt know what youʹve got till itʹs gone," says Ali al-Baroodi, an English teacher at Mosul University who has become an unofficial chronicler of the city, taking photographs of the damage and reconstruction. In June 2014, facing little resistance, the terrorist militia IS took Mosul. The militant Islamists then destroyed unique ancient cultural sites and sold artefacts on the black market to finance themselves or buy weapons. The battle for the recapture of Mosul lasted from mid-October 2016 to early July 2017. The urban destruction was exacerbated by prolonged fighting street for street

Music also features prominently at the book cafe, the first one ever opened recently in Mosul. There, Fahad Sabah and his business partner Harith Yassin offer a platform for concerts and weekly debates about literature and a quiet place for young and old, men and women, to read or work, enjoying a cup of coffee or tea. Sabah proudly announces that they are selling Shia books now, too – another taboo broken in the conservative Sunni city.

In the cafe, where neatly stacked bookcases and portraits of writers, musicians and artists contribute to the atmosphere, Sabah agrees that culture has returned to Mosul. "Even before Daesh, debate was impossible for fear of the extremists and their threats. Now society is far more open. Our place is just one example. Look at what we do and who comes in here. We are running the first public space where both men and women feel at home," he said proudly.

He recounted how long segregation of the sexes had existed in the city. "Until the 1980s, the cinemas were still mixed. But then came the radicalisation of society and village culture went into a downward spiral."

Sabah wants to work hard to avoid the mistakes that were made after 2003 and build on the new openness – even though it's estimated that at least a fifth of Mosul's inhabitants agreed with IS ideology, if not the way it was applied. "That's why we have to understand our problems and our limits. That's the first step toward a solution. It won't be easy; we will have to work hard."

The "maqama", a classical Arabic form of prose-poetry, is still almost unknown in Germany – as is the name of the 11th-century Baghdad poet Ibn Naqiya. A new translation has the ... END_OF_DOCUMENT_TOKEN_TO_BE_REPLACED

Two and a half years since its liberation from the Islamic State group, large areas of Mosul still lie in rubble. Germany is contributing in a variety of ways to the ... END_OF_DOCUMENT_TOKEN_TO_BE_REPLACED

The assassination of the Iranian general Qassem Soleimani in a surprise U.S. drone strike is being used by the Islamic Republic of Iran to political ends, says Iranian journalist ... END_OF_DOCUMENT_TOKEN_TO_BE_REPLACED

The upheavals of the past year in the MENA region are arguably as momentous as those of the Arab Spring in 2011. Yet perhaps the biggest difference is that our interest seems to ... END_OF_DOCUMENT_TOKEN_TO_BE_REPLACED

For 12 years, Nihad Salim Qoja was the mayor of Erbil, capital of the autonomous Kurdish regions of Iraq. Christopher Resch spoke to the local politician in Erbil about the future ... END_OF_DOCUMENT_TOKEN_TO_BE_REPLACED

Trump’s sweet revenge could swiftly turn bitter, after all the U.S. attack is a direct declaration of war against the Iranian Revolutionary Guard and its elite Quds troops ... END_OF_DOCUMENT_TOKEN_TO_BE_REPLACED
Author:
Judit Neurink
Date:
Mail:
Send via mail