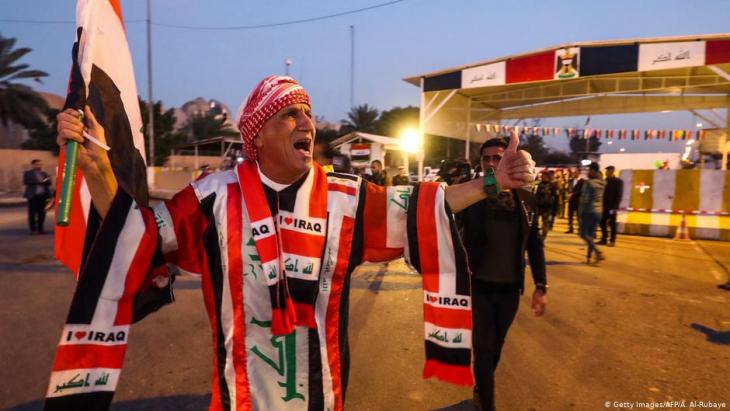 With Islamic State out of the picture, the people of Iraq are breathing a sigh of relief. The recent re-opening of Baghdadʹs Green Zone to all traffic is just one indication that times are changing. Judit Neurink reports from Baghdad.

Slowly, normality is returning to Baghdad. Since the terrorist militia "Islamic State" was ousted from Iraq, the city of eight million inhabitants has changed considerably. Most of the T-walls erected over the past decade to keep both public and private buildings safe have now been pulled down to reveal parks and green zones.

In a major development, the Green Zone housing the parliament, ministries and embassies, which was formerly secured behind fences, walls and checkpoints, was recently re-opened to all traffic.

As part of this changing environment, Baghdad has seen the opening of its first women's cafe, where women can meet without males to accompany them and without wearing the scarf and long abaya that have become so common on the streets. These are, of course, the first things young women remove on entering La Femme cafe.

"Fathers do not want their daughters going to cafes where men smoke water pipes," says Femme's owner Adra Adel-Abid, 47, describing the situation in many public places in Iraq. She provides the popular nargileh, as the water pipes are called, too, but hers are prepared by a woman, while her daughter, Mays, 20, serves an alcohol-free champagne cocktail and other drinks and snacks.

Even if they have to employ a guard, as is common in public places in Iraq, she will find a female one, says Adel-Abid. "Some men are angry that they are not welcome and some say we secretly sell alcohol and drugs." But although Femme is located in a high-rise building with a men's gym and restaurants and only one elevator, no men have ventured inside this female sanctuary to date. 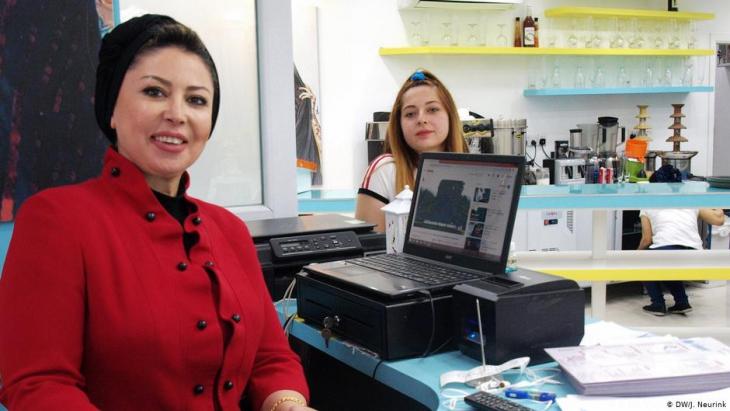 La Femme – Baghdadʹs first women's café: "fathers do not want their daughters going to cafes where men smoke water pipes," says Femme's owner Adra Adel-Abid. She provides the popular nargileh, as the water pipes are called, too, but hers are prepared by a woman, while her daughter, Mays, 20, serves an alcohol-free champagne cocktail and other drinks and snacks. Of course, the first items women remove on entering the cafe are their hijabs and abayas

Adel-Abid's clientele is mostly women from the middle and upper classes. For her young customers, she organises women-only parties for birthdays, engagement and graduations. The older generation prefers to drink a coffee and listen to the old Iraqi singers favoured by Femme's sound system.

Five years ago, she would not have been able to open the cafe, Adel-Abid says. "People were afraid. There is more openness now." Which means women can now run businesses. In addition to Femme, she also set up a venture to collect leftovers from restaurants and feed some of the city's 190,000 poor and displaced persons. Although she has had to call a temporary halt to this activity for lack of money, she is currently looking for wealthy Baghdadis to sponsor her.

Adel-Abid is not the only female entrepreneur in Baghdad. With Islamic State out of the picture and as a result of the current political stability, Iraqi women are demanding their share of the city's public space. In Mansour, the neighbourhood where Femme is located, most cafes and restaurants are now mixed, with women smoking water pipes too.

The winds of change have also reached the streets, where women dress more colourfully, instead of hiding behind black veils. The process extends to the headscarf, which is slowly losing ground with young women; like Mays, they prefer to wears jeans and no scarf.

The same goes for Merry al-Khafaji, who recently tied the knot with Mustafa al-Ani. In her twenties, like her new husband, whom she has joined for a water pipe in a popular Baghdad garden, she arrives with her dark hair flowing freely and wearing a green T-shirt with jeans. 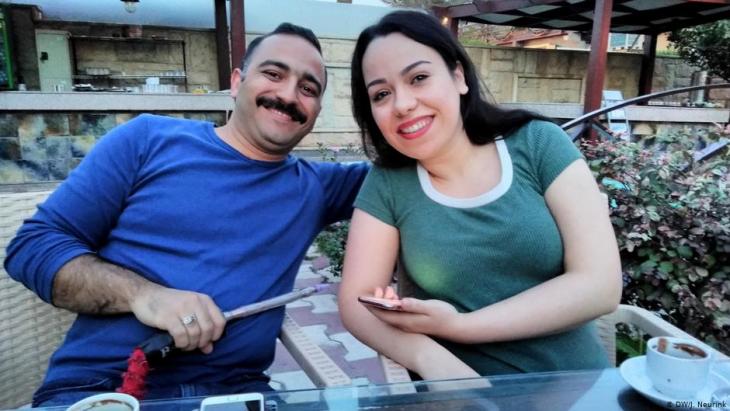 Done with segregation: thanks to social media, "both Sunni and Shia young people have grown critical of the role played by the religious political parties and by religion in our society," Al-Ani points out. But even though mixed marriages "are very normal now" in Baghdad, as he says, they are less common in the more conservative and segregated regions outside the capital

Their marriage is another sign of the changing atmosphere in Baghdad. The fact that he is Sunni and she Shia would have led to huge problems as recently as a couple of years ago. But since the Iraqis united to cast out Islamic State, mixed marriages have made a comeback in the country; in fact, among the young in Baghdad, they have even become 'the new normal.'

Before the fall of Saddam in 2003, it was normal for Iraqis to marry freely between sects and religions. But the new regime divided the country by belief and when the Shia majority came to power, it led to a civil war between the sects, the rise of radical Islam and, ultimately, Islamic State. As a result, parents preferred their children to marry within their own group. "But after IS, many Iraqis decided they wanted to leave that black era behind them and return to the time before the divisions," says the young couple.

Traditionally, parents choose their children's partners, but they met at the telecoms firm where they work. They are not alone – many young people now meet at work, as well as during study or workshops.

The notorious U.S. prison camp is 20 years old. Over the years, several plans to close it have been rejected. For the detainees, little has changed in the last two decades. Oliver ... END_OF_DOCUMENT_TOKEN_TO_BE_REPLACED

Historically Iraq's Yazidi community was isolated, under-resourced and very conservative. Seven years after the "Islamic State" tragedy, the community is more open to the world – ... END_OF_DOCUMENT_TOKEN_TO_BE_REPLACED

Asef Bayat, professor of Sociology at the University of Illinois, Urbana-Champaign, has been studying revolutions and how they affect people since 1979. In his recent book, " ... END_OF_DOCUMENT_TOKEN_TO_BE_REPLACED

Young people in northern Iraq are so disillusioned that many are trying to leave the country any way they can. Some fear widespread discontent could push people toward potentially ... END_OF_DOCUMENT_TOKEN_TO_BE_REPLACED

In this new bilingual edition, translated by Humphrey Davies, al-Jawbari, one of the thirteenth century's leading experts in skullduggery reveals all there is to know about the ... END_OF_DOCUMENT_TOKEN_TO_BE_REPLACED
Author:
Judit Neurink
Date:
Mail:
Send via mail

END_OF_DOCUMENT_TOKEN_TO_BE_REPLACED
Social media
and networks
Subscribe to our
newsletter