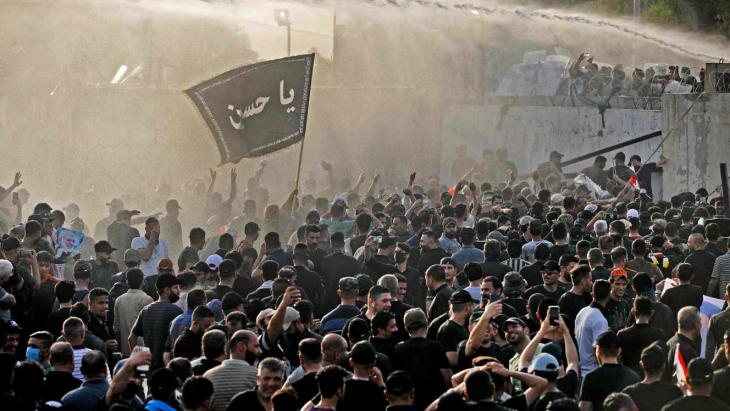 Thousands of demonstrators opposed to Iraq's powerful cleric Muqtada al-Sadr staged a protest on Monday at the edge of Baghdad's fortified government zone, where Sadr's supporters were holding an open-ended occupation of Iraq's parliament.

The rival Shia Muslim groups are affiliated with heavily armed militias, raising fears of clashes as tension soars over the failure to form a government nearly 10 months after an October election – the country's longest post-election deadlock.

Sadr's opponents include a grouping of parties and militias mostly aligned with Iran. That grouping, known as the Shia Coordination Framework, said Monday's protest aimed to protect state institutions against the civil unrest of the Sadrists.

Outside Baghdad's Green Zone, which houses the parliament building which Sadr's supporters took over last week, the protesters threw stones at police. From behind concrete barriers, police responded by spraying them with water.

"We'll stay here if we’re told, and march in if we’re told," said one of the protesters, Abu Ahmed al-Basri, a 58-year-old teacher from Basra, waving a banner calling for the downfall of outgoing Prime Minister Mustafa al-Kadhimi – who remains as caretaker until a new government is formed.

Supporters of Sadr said they were awaiting his command. "We're ready for whatever Sadr orders," said Kadhim Haitham, on his way to join the parliament sit-in. "We're against the Framework. All they've got is statements and no popular support."

A commander of a pro-Iran militia said he feared clashes on Monday and hoped calm heads would prevail.

"The situation in Iraq is very tough. We hope God will deliver us from fighting among the brothers. If things devolve, it will ruin the whole region," the commander said, declining to be named as he was not authorised to speak to the media.

Sadr came first in the October election, but withdrew all his lawmakers from parliament after he failed to form a government that excluded his Shia rivals.

He has since exerted political pressure through his masses of loyal followers, mostly working-class Shias from poor neighbourhoods in Baghdad and across southern Iraq, the heartland of the country's Shia majority.

Sadr's actions have prevented his rivals, including bitter foe, ex-Prime Minister Nouri al-Maliki, from forming a government. Parliament must choose a president and premier and cannot convene while it is occupied by Sadr's followers.

The Sadrists have called for new elections and an end to the political system that has existed since the U.S.-led invasion which toppled Sunni dictator Saddam Hussein.

That system distributes power by sect and party, and is blamed by many Iraqis for the endemic corruption and dysfunction that has prevented any meaningful progress for years, despite Baghdad's oil wealth and relative peace after the defeat of Islamic State militants in 2017.

Sadr is one of the chief beneficiaries of that system. His loyalists run some of Iraq's wealthiest and worst-managed ministries.    (Reuters)

END_OF_DOCUMENT_TOKEN_TO_BE_REPLACED
Social media
and networks
Subscribe to our
newsletter