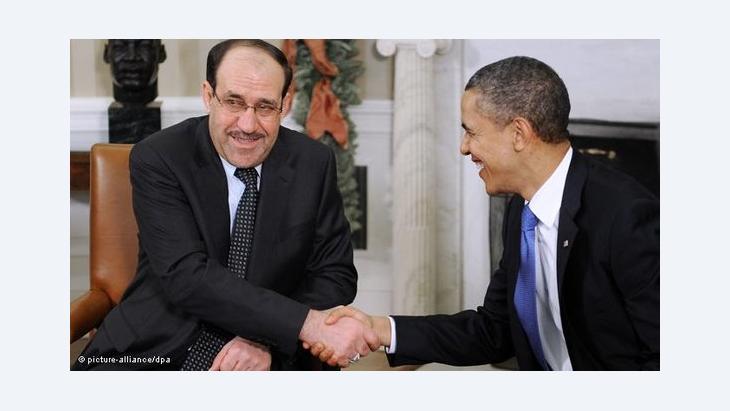 ﻿Obama's re-election did not exactly spark a wave of enthusiasm in Iraq. Many Iraqis are disappointed that the US President failed to keep the promises he once made for the country on the Tigris River. The Maliki government's attempts to curry favour with Russia of late have also cast a pall on Iraq's relationship with the USA. An update from Baghdad by Birgit Svensson

Barack Obama made only a single visit to Iraq. It was in April 2009, at the beginning of his first term of office – almost as a detour on his return trip from Turkey. During his speech to some 600 American soldiers at the US military base at Baghdad Airport, one thing was made clear: "We won't be seeing him around here any time soon." In no uncertain terms, the President announced that he would implement without delay the planned withdrawal of troops negotiated by his predecessor, President Bush.

After six years of war and the death of 4266 American soldiers, it was now time for the Iraqis to assume responsibility for their country. The American military provided Iraq with the opportunity to stand on its own feet as a democratic state. As the last American soldiers pulled out of Iraq in the direction of Kuwait, the coalition government in Baghdad, which was hammered together with great effort by the Americans, fell apart. Since then, Iraq has been lurching from one government crisis to the next. 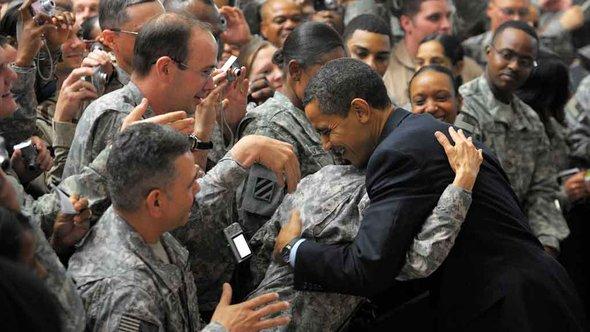 Departure into the unknown: "As the last American soldiers pulled out of Iraq in the direction of Kuwait, the coalition government in Baghdad, which was hammered together with great effort by the Americans, fell apart"

​​Less popular even than George Bush

The response on the Tigris to Obama's re-election has been predictable. Despite all the problems resulting from the occupation, terrorism, in particular, most people in Baghdad prefer George W. Bush. "You can't tell where Obama stands," explained a newspaper seller, expressing the views of many of his compatriots. "At first, he presented himself as a friend of the Muslims, and then he let us down."

Bush, he continues, at least made an effort. It should come as no surprise, therefore, that Obama is blamed for the never-ending conflict between the arch-rivals Prime Minister Nuri al-Maliki and his challenger Iyad Allawi, as well as the resultant political stalemate, instead of Bush, who in reality caused the dilemma. It was Bush's administrator Paul Bremer, who introduced the current power constellation, which is proportionately divided along ethnic and religions lines.

This system is now preventing Iraq from moving towards a democracy based on a parliamentary majority. "When everyone sits down at the same table and they all want a piece of the pie, then everyone ends up stuffing their own pockets," writes one political commentator, who publishes his column under a pseudonym in a highly respected Iraqi web portal. This means practically unrestrained corruption, as there is no opposition.

One of the most corrupt countries in the world

Iraq's status as world champion in corruption has also been corroborated by the NGO Transparency International, which is dedicated to the fight against corruption worldwide. Since 1995, the NGO has issued an annual corruption index, in which a survey is conducted that includes over 180 countries.

In 2010, Iraq found itself third to last on the list. Only Somalia and North Korea were more corrupt. Last year, in 2011, Iraq improved its results somewhat and now places eighth to last. The index lists countries according to the level of corruption among government officials and politicians. 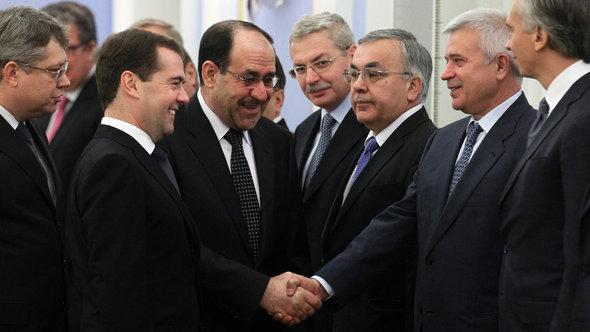 Russian-Iraqi relations are warming: After the leaders in Moscow largely lost their influence in Iraq with the toppling of ruler Saddam Hussein in 2003, they are now trying to restore relations with the Gulf State

​​Prime Minister Maliki apparently wants to confront this issue. On November 11, he cancelled a comprehensive arms deal between Russia and Iraq that amounted to around 3.3 billion Euros. A government spokesman blamed the collapse of the deal on suspicion of corruption. In early October, Al Maliki travelled to Moscow for talks with President Vladimir Putin and other government representatives, agreeing to purchase 30 MI-28 military helicopters and more than 40 Pantsir-S1 rocket systems.

The explanation at the time was that the weapons were to be employed in the fight against terrorism. Negotiations had been underway since April. The deal would have been advantageous for both sides. Russia would have become Iraq's second largest arms supplier after the USA. And Iraq would have, to some extent, liberated itself further from the USA – a goal that Maliki has been publically pursuing. The head of government has repeatedly stressed that Iraq should not "be part of the monopoly of another state."

Back in Iraq, however, doubt was raised concerning the legality of the deal. One member of parliament posed the question as to whether the weapons at issue could sensibly be deployed in the fight against terrorism. Finally, members of the parliamentary committee against corruption wrote a letter to the Prime Minister asking him to put the deal on hold. Corruption allegations concerning acting Defence Minister Saadun al-Duleimi could no longer be suppressed.

Duleimi has long been the target of criticism, as he currently occupies two ministerial posts. As Maliki has steadfastly rejected all personnel suggestions by his coalition partners for the defence portfolio, Duleimi can remain provisionally in office, while simultaneously holding the post of Minister of Culture. Last year, he diverted millions of dollars from the Cultural Ministry to the Defence Ministry.

The media echoed with the accusation that instead of culture, the government was financing arms. Duleimi became alarmed and eventually endorsed the construction of an opera house on the Tigris.

After Maliki's spokesman announced the collapse of the arms contract, Duleimi turned to the press with a denial. "The deal will go through." He claimed there was no problem with corruption in this case. It was merely that the government failed to submit necessary documentation on the contract with Russia to an anti-corruption committee on time.

The Russian news agency Novosti believes that there is another reason for the cancelation of the arms deal. According to a high-ranking official in the Russian armaments industry, the failure can be traced back to pressure put on Iraqi authorities by Washington. "American officials are behind the Iraqi declaration to cancel the weapons supply contract. They are attempting to prevent the implementation of the Russian-Iraqi agreement."

Western observers also believe that the new closeness between Baghdad and Moscow caused the government in Washington to take notice. The Obama administration's sentiment that they were "losing Iraq" could only have been reinforced by these developments.

Home
Print
Newsletter
More on this topic
Iraq after the Withdrawal of US Troops: A ''Stable'' Country Teetering on the BrinkCommentary by Feisal Amin al-Istrabadi: Is Obama Losing Iraq?US Foreign Policy in Afghanistan and the Middle East: Obama's Strategic Malady
Related Topics
All Topics
Date:
Mail:
Send via mail

END_OF_DOCUMENT_TOKEN_TO_BE_REPLACED
Social media
and networks
Subscribe to our
newsletter