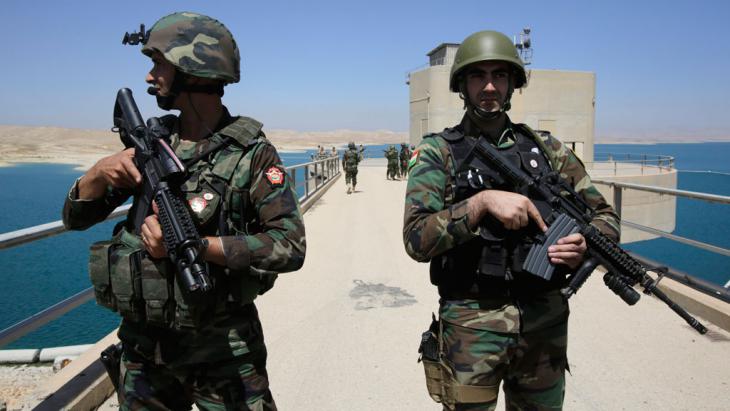 Iraqi crisis
The expected death of a nation

Iraq has always been an artificial country, an entity created and beset by outside influences. However, Iraq is not currently being threatened by outside influences alone; discord is now flourishing within the country itself – with devastating consequences. A commentary by Rudolph Chimelli

Iraq is suffering for the sins of its founding fathers. Its borders are artificial, drawn by the victors of the First World War to suit their own interests, their greed for oil proving stronger than the original agreements made regarding the carving up of the Ottoman Empire.

The Sykes-Picot Agreement between London and Paris gave Mosul to the French, but after just one year of peace, the British managed to have Mosul and its crude oil handed over to them. In return, France was given "free rein" in Syria and Lebanon. Winston Churchill once called petroleum "a prize from fairyland, beyond our wildest dreams". He was talking about Iranian oil, but the close connection between oil and power transcended borders and applied equally to Iraq and the Gulf as well.

From the outset, the centrifugal forces were strong in this new state, which was cobbled together by the British. In the 1920s, the Kurdish tribes in the north had a sense of loyalty bombed into them by the Royal Air Force. Churchill wondered why poison gas had not been used. That was the first time that fighter planes had been deployed against the population of modern Iraq. For decades, the Kurds repeatedly rebelled against the central government in Baghdad. The dictator Saddam Hussein was the first to combat them with poison gas. 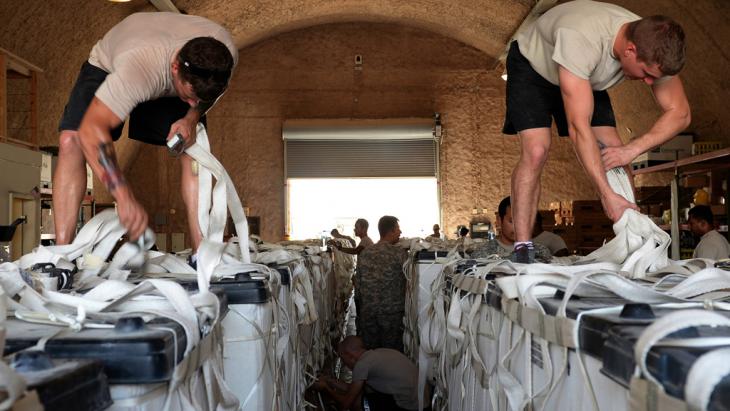 In early August, US President Barak Obama authorised two humanitarian aid drops of bottled water and food for citizens trapped in the mountains in the vicinity of Sinjar, Iraq, who were displaced by advances made by the Islamic State (IS). Pictured here: US soldiers prepare pallets of water for an air drop

The threat to Iraq's borders

Many people in the military doubt that the well-equipped terrorist groups of the Islamic State can be vanquished by air strikes alone. Their self-proclaimed caliph, Ibrahim, has declared that the borders between Islamic countries have been abolished. But his regime puts the vast majority of the faithful off the idea of unity among all believers in the true faith and the extermination of heretics.

Ibrahim himself may turn his attention to other targets if he fails to take Baghdad and Erbil. Such targets could include Aleppo and other parts of northern Syria as well as Lebanon and a push towards the Sunni city of Tripoli.

In the extreme south of Iraq's Kurdish region, his fighters are a mere 20 kilometres away from Khanakin, the border-crossing on the main route from Baghdad to Tehran. But since the false caliph seems to grasp the realities of the situation, he is hardly likely to turn his attention on Iran and Turkey.

The destabilisation of Iraq began in 1990 when Saddam attempted to annex Kuwait. This led to catastrophe. Nevertheless, the first President Bush seemd to believe that Iraq could only be governed by Saddam or someone like him. Unlike his son, he didn't send troops marching into Baghdad.

The wounds inflicted on the country by the American war of aggression under the second President Bush in 2003 and the eight years of occupation that followed, are enduring. At least 300,000 Iraqis were killed in this phase of the civil war. The country's infrastructure was destroyed, and oil revenues were wasted. The USA's current humanitarian campaign of dropping food and water bottles from the air will not repair the damage caused to body and soul. 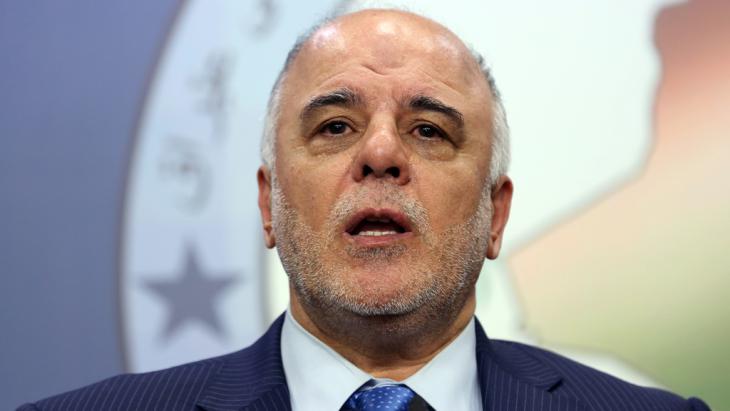 Iraq's new prime minister, Haider al-Abadi. "It is uncertain whether the new government can save the state of Iraq in its present form by avoiding the mistakes of the former prime minister," writes Rudolph Chimelli

Iraq's future looks dismal. It is uncertain whether the new government can save the state of Iraq in its present form by avoiding the mistakes of the former prime minister, Nouri al-Maliki. The wounds that the bullying rule of the Shia al-Maliki inflicted on the self-esteem of the Sunnis are difficult to heal.

The sectarian civil war and the terror have forced at least four million Iraqis to flee their ancestral homeland. While 45 per cent of Baghdad's population was once Sunni, today it is perhaps as little as five per cent. This sort of demographic revolution is impossible to reverse.

Neighbouring Iran, which once fought an eight-year war with Iraq, supported al-Maliki to the very end. But the government in Tehran has also given its seal of approval to the new prime minister in Baghdad, Haider al-Abadi. Above all, Iran wants to avoid chaos in Iraq and to stop Kurdistan attaining independence. After decades of expressing reservations, the only country so far willing  to accept such a prospect is Turkey.

Historically, Iraq has always been a region. For oriental geographers and travellers, "Iraq ajami", the mountainous region of western Persia, and "Iraq arabi", Arabian Mesopotamia, have existed since time immemorial. The country of Iraq never existed until its Western midwives brought it into the world. Today, it is not neighbouring countries or world powers that threaten the borders of Iraq; discord is flourishing within the country itself.

Home
Print
Newsletter
More on this topic
The Middle East policies of Europe and the US: Mistakes must not be repeatedBook review: "The Last Place" by Sherko Fatah: A book about intercultural misunderstandingsThe Peshmerga fight against IS militia: An unpredictable enemy
Related Topics
'Islamic State' | IS, Colonialism, Iraq War, Kurds, Nouri al-Maliki, Oil, Saddam Hussein, U.S. policy in the Middle East
All Topics

When is it and when is it not acceptable to display a political banner at the World Cup in Qatar? The answer seems to depend largely on the political message, with fans ... END_OF_DOCUMENT_TOKEN_TO_BE_REPLACED

The Kurds are under attack from two sides: from Turkey, and from Iran. The situation in their territories in northern Iraq is becoming increasingly desperate. Birgit Svensson ... END_OF_DOCUMENT_TOKEN_TO_BE_REPLACED

Iranians do not want an Islam that interferes. They are fed up with a system that manipulates people with simple promises of salvation and anti-Western propaganda. Islamic ... END_OF_DOCUMENT_TOKEN_TO_BE_REPLACED

"The Voice of Dust and Ash" draws us into the life and times of Iranian maestro Mohammad Reza Shajarian with passion and joy, focusing on the man who stood, and still stands, for ... END_OF_DOCUMENT_TOKEN_TO_BE_REPLACED

November 2022 sees the Arab world firmly in the spotlight with the COP27 in Egypt and the FIFA World Cup in Qatar. Public trust in MENA governments is weak, thanks to their ... END_OF_DOCUMENT_TOKEN_TO_BE_REPLACED

In Iran, two famous actresses, Hengameh Ghaziani and Katayoun Riahi, were arrested recently. These days anyone who shows solidarity with the protesters is a target to be silenced ... END_OF_DOCUMENT_TOKEN_TO_BE_REPLACED

Comments for this article: The expected death of a nation

I hope Iraq will get itself together and fight to keep their land and remove ISIS for their towns. They have always been the "step child" of the Arab countries as shown mostly by Hussein and their disdain for him. But those that ruled before him were no better but each of the Arab countries--Egypt, Saudi Arabia,Syria and ,Lebanon esp--all turned up their noses at him and his so he pretty much went his own way. Now that he is gone and so are we--thank goodness--they must work together--Shia, Sunni, secular, etc--to remove the ISIS from their land and keep all parts of Iraq together. If they can keep religion out of their politics as has been done in part for all others except Arabia, they may get Iraq together as one. Whether the Kurds break off is yet to be seen but the rest can do better if they all fight now to bring peace and settle their differences afterwards. I am glad to see Turkey is working on their side. It may also help the PKK living in the mountains to join the rest and practice their religion on their own terms and let the rest do likewise. Politics and religion are like oil and water. One may float on the other but they don't mix easily. The air cover and bombing may be necessary now but only to lessen or destroy most of ISIS. Iraq must gather for their own political decisions.

END_OF_DOCUMENT_TOKEN_TO_BE_REPLACED
Social media
and networks
Subscribe to our
newsletter