Iraqi Kurds turn to Zoroastrianism as faith and identity entwine

In a ceremony at an ancient, ruined temple in northern Iraq, Faiza Fuad joined a growing number of Kurds who are leaving Islam to embrace the faith of their ancestors -- Zoroastrianism.

Years of violence by the Islamic State jihadist group have left many disillusioned with Islam, while a much longer history of state oppression has pushed some in Iraq's autonomous Kurdish region to see the millennia-old religion as a way of reasserting their identity.

"After Kurds witnessed the brutality of IS, many started to rethink their faith," said Asrawan Qadrok, the faith's top priest in Iraq's autonomous Kurdish region.

During Fuad's conversion ritual in Darbandikhan, near the Iranian border, a high priest and his assistants wore white clothes representing purity and recited verses from the Zoroastrian holy book, the Avesta.

They knotted a cord three times around Fuad's waist to symbolise the faith's core values of good words, good thoughts and good deeds.

The newcomer raised her hand and swore to abide by those three values and to protect nature, respecting water, air, fire, earth, animals and humans.

Dances, colourful carpets, fire jumps and the "seven S's": Nowruz (literally "new day") marks the first day of spring and the beginning of the year in the Persian calendar. The feast is celebrated by 300 million people around the world. 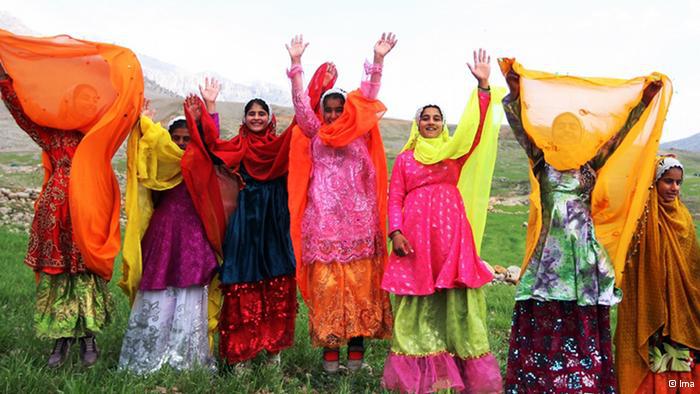 Colourful new year: Nowruz can be traced back to a Zoroastrian tradition that began around 2,500 years ago. Today, Nowruz, which is celebrated on the day of the March equinox, is marked by people in Iran, Afghanistan, Tajikistan, Azerbaijan, Turkey, Iraq and parts of China. 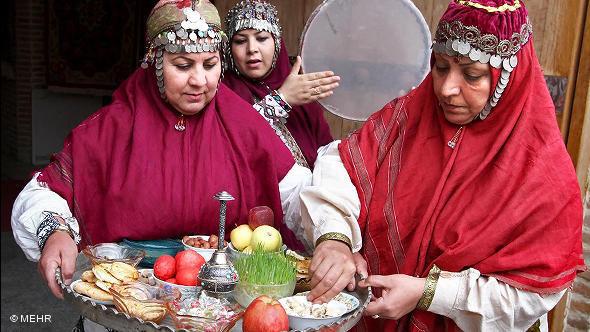 Customs and rituals: preparations for the "new day" begin weeks ahead of the actual event. Most traditions vary from country to country, but some are shared wherever Nowruz is celebrated. These Iranian women, for example, are preparing a traditional "Haft Sin" platter. 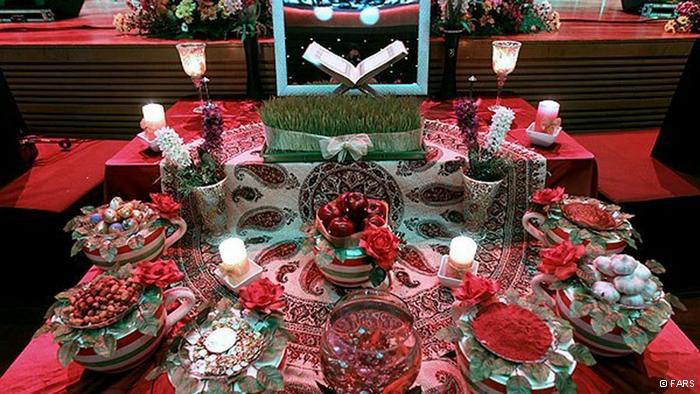 The Haft Sin ("seven S's") table is a well-known feature of Nowruz celebrations. The name comes from the fact that all elements on the table start with the letter s - sekkeh (coins), sib (apples), somaq (sumac), sonbol (hyacinths), sir (garlic), sabzi (greens - usually peppergrass) and serkeh (vinegar). All these things have a symbolic meaning for the new year. 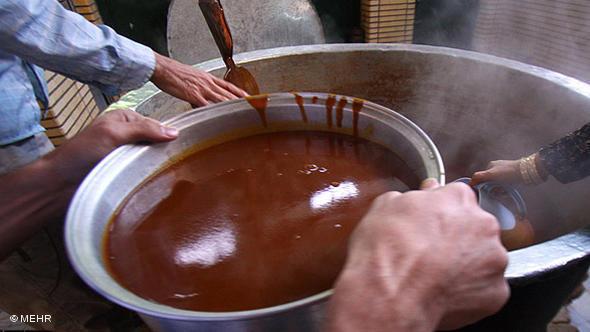 Good things come to those who ... eat!: samanou is typically served on Nowruz. The sweet paste is made out of wheat germ and eaten either alone or with bread. The wheat soaks for a week before the tasty treat is finally prepared. 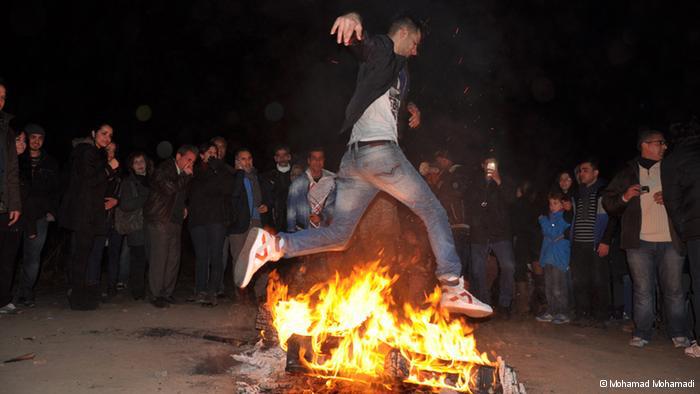 The fire jump: the last Tuesday evening of the "old year" symbolises the beginning of Nowruz. Pictured here: young Iranians in Germany welcome the new year festivities with fire jumps. Jumping over the bonfire symbolises that one is leaving the past behind and welcoming in the new. 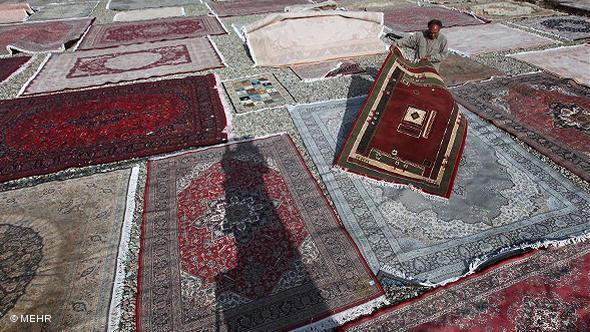 Spring clean: everything is dusted, wiped, cleaned and polished to a sparkle for the festivities. It is considered particularly important to air rugs outside and give them a good beating so that they are fresh for the new year. Pictured here: this Iranian man is searching in vain for an empty spot in the sun for his carpet. 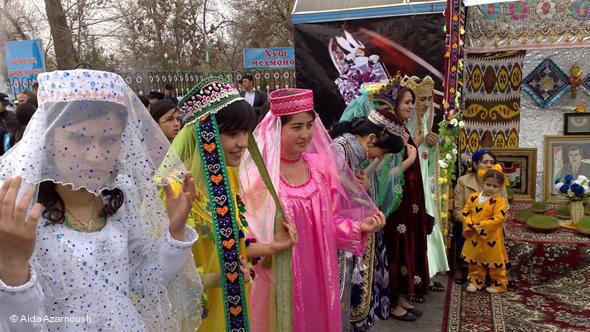 Dancing to welcome the spring: in Tajikistan, people celebrate Nowruz with traditional song and dance. In the capital, Dushanbe, people gather at the stadium to watch a parade of girls and women showing off their perfectly choreographed and rehearsed steps. 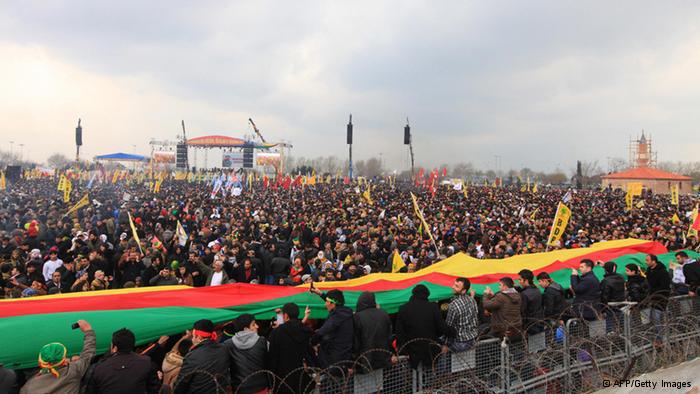 Turkey: Kurds in Turkey also celebrate Nowruz. Here, a crowd has gathered in Istanbul to mark the event. Traditionally, people put on new clothes and meet in public places or visit family and friends to celebrate the new year, while children receive gifts of money and sweets.

"I feel very happy and refreshed," Fuad said, adorned with her Farawahar necklace, a powerful spiritual symbol given to her by the high priest. She said she had been studying Zoroastrianism for a long time and was drawn to its philosophy, which "makes life easy".

"It is all about wisdom and philosophy. It serves mankind and nature," she said.

Zoroastrianism was founded in ancient Iran some 3,500 years ago, gaining followers as far afield as India.

It was the official religion of the powerful Persian empire for a thousand years, but the assassination of the final Zoroastrian king in 650 and the rise of Islam sent it into a long demise.

However the faith did survive -- often in the face of severe persecution -- and famous followers include Freddie Mercury, whose Zoroastrian family were originally from Gujarat in western India.

"During (late dictator) Saddam Hussein's rule, my father practiced Zoroastrianism but kept it secret from the state, our neighbours and relatives," said Awat Tayib, who represents the faith at the regional government's ministry of religious affairs.

In 2014, IS jihadists captured swathes of northern Iraq, carrying out what may have constituted a genocide against another minority, the Yazidis.

The extremists imposed a violent version of Islamic law and sparking a three-year war that eventually left their self-proclaimed "caliphate" in tatters and the region in ruins.

"Many think IS values are very odd in contrast with Kurdish values and traditions, so some have decided to abandon their faith," high priest Qadrok said, adding that he performs ceremonies every week to welcome new converts.

The religion only gained official recognition by regional authorities in 2015, but since then, three new temples have opened - although Tayib said the state has yet to build a cemetery for followers of the religion.

For some in the autonomous region, which overwhelmingly voted for independence in a 2017 referendum bid, turning to Zoroastrianism is a way for a stateless people to assert regional identity in defiance of Baghdad.

Tayib, the only female religious representative in the autonomous government, said Kurdish society is becoming more tolerant towards Zoroastrians.

AFP accompanied the high priest and his assistants to Islamic Friday prayers organised to condemn a Turkish military incursion into Kurdish parts of northern Syria.

As the Zoroastrian religious men arrived, they were surrounded by Muslims welcoming them and asking for selfies.

Islam is still by far the main religion in the Iraqi Kurdistan, while there are no official figures on Zoroastrians.

"The Zoroastrians are our brothers, not our enemies: our enemies are the ones who are killing us, such as (Turkish President Recep Tayyip) Erdogan," said Islamic cleric Mullah Saman, who welcomed the Zoroastrians.

Azad Saeed Mohammad, the head of Yasna, a body which promotes Zoroastrianism in Kurdistan, said Kurds "need to have their own religion just like other nations in the Middle East in order to save themselves from aggression and invaders".

"We need to use our ancient religion to revive our identity and build the nation," he said.    (AFP)

END_OF_DOCUMENT_TOKEN_TO_BE_REPLACED
Social media
and networks
Subscribe to our
newsletter