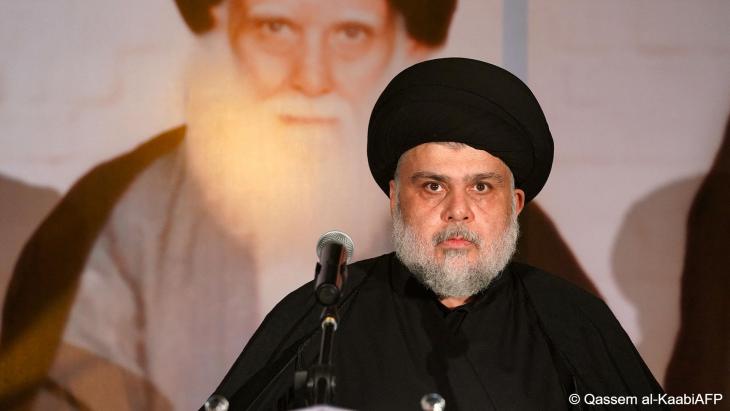 Iraqi lawmakers from firebrand Shia cleric Muqtada al-Sadr's bloc resigned on Sunday, the parliamentary speaker said, in a move ostensibly designed to up pressure to end an eight-month political paralysis.

Sadr on Thursday had urged the MPs from his bloc – the biggest in Iraq's parliament – to ready resignation papers, in a bid, he said, to break the parliamentary logjam and create space for the establishment of a new government.

Parliament in Baghdad has been in turmoil since October's general election, and intense negotiations among political factions have failed to forge a majority in support of a new prime minister to succeed Mustafa al-Kadhimi.

"We have reluctantly accepted the requests of our brothers and sisters, representatives of the Sadr bloc, to resign," parliament's speaker Mohammed al-Halbussi said on Twitter after receiving resignation letters from the 73 lawmakers.

Iraqi lawmakers have already exceeded all deadlines for setting up a new government set down in the constitution, prolonging the war-scarred country's political crisis.

"If the survival of the Sadrist bloc is an obstacle to the formation of the government, then all representatives of the bloc are ready to resign from parliament," Sadr had said on Thursday.

Parliamentary services were not available on Sunday evening for comment on the constitutional implications of the Sadr bloc's move.

But Iraqi political analyst Hamzeh Hadad called the move "more political theatre" from the Sadrist movement and Halbussi, an ally of the cleric. "Although the speaker accepted the resignation, the Parliament has to vote with an absolute majority after reaching quorum" for the resignations to take effect, he said on Twitter.

Parliamentary holidays began on Thursday and MPs are not scheduled to return until August.

The two Shia groupings – a coalition led by Sadr, and its powerful rival, the Coordination Framework – have each claimed to hold a parliamentary majority, and with it the right to appoint the prime minister.

While he counts on the direct loyalty of 73 lawmakers, his wider bloc also includes Sunni lawmakers from Halbussi's party and the Kurdistan Democratic Party (KDP).

But the grand total of Sadr's bloc of 155 still falls short of the absolute majority needed in the 329-member parliament.

Sunday's move puts the onus for forming a government on the 83 lawmakers of the rival Coordination Framework, which draws lawmakers from former premier Nuri al-Maliki's party and the pro-Iran Fatah Alliance, the political arm of the Shia-led former paramilitary group Hashed al-Shaabi.

State institutions have been weakened by decades of war and corruption plagues all levels of the Iraqi state. Official figures published last year estimated that well over $400 billion had gone missing from state coffers in the near two decades since dictator Saddam Hussein was toppled in 2003.

And despite its immense oil and gas reserves, Iraq remains dependent on imports to meet energy needs, with neighbouring Iran providing a third of Iraq's gas and electricity needs.

Major anti-regime protests in late 2019 were spurred in large part by anger over corruption and the related dilapidation of public services.

Lawmakers have already failed three times to elect a new national president, the first key stage before naming a prime minister and the subsequent establishment of a government.

If the parliamentary impasse cannot be broken, new elections could follow – but that would itself require lawmakers to agree on dissolving parliament.

The UN envoy to Iraq, Jeanine Hennis-Plasschaert, last month urged Iraqi politicians to end the deadlock, warning that "the streets are about to boil over".    (AFP)

END_OF_DOCUMENT_TOKEN_TO_BE_REPLACED
Social media
and networks
Subscribe to our
newsletter