The Arab Answer to 'Godot'

An Iraqi-German cooperative project has staged the drama "Waiting for Rain" after Beckett's "Waiting for Godot". It shows Iraqi society in search of itself. Leonie Kircher spoke with the project's initiators 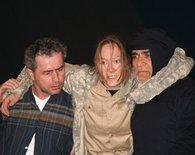 ​​"We have to move on!"... Theatre director Ihsan Othman drums his fingertips emphatically on the wooden table in rhythm with each syllable.

"You cannot always just say: We had a bad past. Of course, you can complain, but getting stuck there is no solution. If you have a problem, it's up to you to free yourself from the situation, step by step. This is what we want to show with our play."

"Waiting for Rain" is the title of the play Ihsan Othman is referring to. Internationales Offenes Theater (International Open Theatre) performed it last October in Potsdam and Berlin, and then in December in Erbil and Dohuk in Iraq-Kurdistan.

Adaptation of "Waiting for Godot" 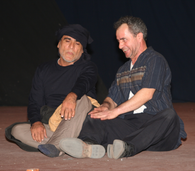 ​​After the staging of "Death and the Maiden" a year ago, when people were still agitatedly grappling with questions of retribution and justice, guilt and sin in an attempt to come to terms with the dictatorship under Saddam Hussein, the adaptation of "Waiting for Godot" lends itself to broader reflections.

"It's an examination by the Iraqis of themselves and their situation: How did it come to this and where are we now?", explains Antje Hobucher. At a second level, adds Eduardo Fernández-Tenllado, the drama deals with the encounter of two entirely different cultures, the difficulties of understanding the other, rapprochement and distancing, as well as expectations and projections.

What is special about this stage production is that there are actually four different productions: English, German, Kurdish, and one in several languages. Each production had a different director so that different cultural aspects flow into the various performances. 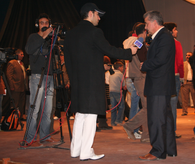 ​​The multi-language production was directed by Ihsan Othman. On stage every actor speaks the language of his country, resulting in a "modern Babylon" of Kurdish, Arabic, Farsi, American English, and German. The actors thus not only convey speechlessness but also directly experience it themselves, imbuing the drama with a particular tension.

The Iraqi performance was preceded by a one-week workshop in which the drama was adapted to the conflict-laden situation in Iraq. The setting was moved to the desert. The original characters "Vladimir" and "Estragon" were renamed "Arabo" and "Kaki" – Kurdish for "Arab" and "Kurd". "Pozzo" and his servant "Lucky" became an American officer and her German mercenary. And the little boy in Beckett's drama is turned into an angel, played by an Iranian actress.

Arabo and Kaki, just escaped from prison, have become lost in the desert. In their search for a way out the American officer and her German mercenary run across the two men. The Arabs hope that the American woman and her mercenary know the way out of the desert.

But their hopes are in vain. They soon realise that the two women are just as lost and are themselves hoping that the Iraqis, as natives, will know the way out. So Arabo and Kaki, at a loss, stay put while the soldiers continue to wander aimlessly through the desert.

The actors alternate between resignation and hope, both of which prove to be inhibitory. And ultimately they freeze in this interplay between waiting and expectation.

Even the angel as a supernatural, omnipotent figure, who appears to the seekers in the desert, cannot help them, but instead regularly announces the coming of rain or a rescuer, without either ever really happening. The end remains open.

Healing humour instead of cleansing rain

The central theme of the drama is the waiting – whether for Godot, God, or rain. Spectators are waiting for the protagonists to realise that it is up to them to take destiny in their own hands and to make the next step rather than waiting for some indefinite help to arrive from outside.

"Waiting for Rain" is the Arab answer to Godot. Just as improbable as the appearance of Godot in the original play is the phenomenon of rain in the desert. The resolution and letting go of the past through cleansing rain remains unfulfilled.

Yet the drama does not leave one without hope. The absurdity of the situation and the unfolding dialogue lends a humorous note to "Waiting for Rain".

It is this humour that helps the spectator to gain distance in this truly tragic situation so that he has space for self-reflection. Humour is the appeal of Beckett's drama for actress Antje C. Hobucher, as "it is healing and helps us to reflect on the situation."

Theatre as stage of reflection

The popularity of theatre in Iraq and its ability to help people process the still very recent historical events there is reflected in current investments in the cultural sector, at least in Kurdistan. Theatre is significant, as it can take on the role of physician, since thousands – if not millions – will need physicians to treat the trauma of the Iraqis, explains Othman.

Theatre can help Iraqis to understand their situation better. Discussing the past and coming to terms with it through drama enables people to return to their lives and move on. The stage as such functions as a "treatment table for society".

"Death and the Maiden" in Iraq
From Pinochet to Saddam Hussein
The themes of torture, guilt and vengeance under Chile's military junta are at the heart of Ariel Dorfman's play "Death and the Maiden". Now a Berlin theatre group has been performing the play, premiered in 1991, in Iraq. Antje C. Hobucher und Eduardo Fernández-Tenllado reflect on the experience

Interreligious Theatre Project
Jesus and Mohammed
An unusual theatre project about the meeting of two world religions was performed recently during the Protestant Church Congress. Following the performance theatre enthusiasts, both Christians and Muslims, could participate in discussions over common characteristics and taboos. Cem Sey provides more insight

Lahore World Performing Arts Festival
At the Banks of Annemarie Schimmel Bay
The Rafi Peer Theatre Workshop has been organising Lahore's International Theater and Dance Festival since 1992. Inspired by his stay at the Max Reinhard Seminar in Germany, Peer had then introduced modern drama to the subcontinent. Elisabeth Einecke-Klövekorn reports from Lahore

END_OF_DOCUMENT_TOKEN_TO_BE_REPLACED
Social media
and networks
Subscribe to our
newsletter