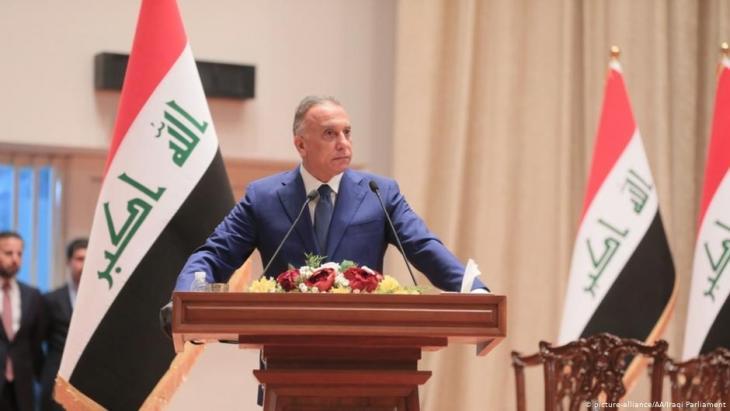 The new Iraqi Prime Minister, Mustafa al-Kadhimi, has great plans. As he moves to realise those plans, he's fighting on many fronts. As the Americans pull out of Iraq, militias supported by Iran are violently consolidating their position. Birgit Svensson reports from Baghdad

She was on her way home from work, travelling as usual by bicycle. Suddenly, two jeeps drew up and she was dragged off her bike into one of the vehicles. The German curator Hella Mewis has not been seen since. The abduction has been confirmed by the Iraqi Ministry of the Interior and a Kurdish member of parliament. The German Federal Foreign Office has made no comment, but efforts to secure the release of the woman from Berlin are ongoing. Experience shows that the first 48 hours are the most crucial. Lines of inquiry are easier to pursue within this time frame. The longer a hostage-taking situation goes on, the more difficult it is to secure a release.

The abduction of Hella Mewis comes at a time of great uncertainty. The atmosphere in Baghdad is tense – for several reasons. The new prime minister, Mustafa al-Kadhimi, who has been in office for just two months, faces numerous challenges: problems with Iran and the Americans, problems with the militias, the resurgence of IS, a severe financial crisis due to falling oil prices, a second wave of the coronavirus pandemic currently causing a spike in the infection rate and finally, the protest movement that brought him to power and which can be remobilised at any time if he doesn't deliver.

Third attempt to form a government

The first two attempts to form a government failed in the wake of Adel Abdul Mahdi's resignation in November following months of protests. Al-Kadhimi was named as PM in the third attempt.

The journalist and head of the Iraqi intelligence agency since 2016 began his tenure in dramatic style. In late June, he ordered a raid on the Baghdad headquarters of the powerful Kata'ib Hezbollah. The Iran-backed Shia militia is accused of carrying out attacks on military installations. Rocket launchers were seized and 13 fighters arrested in the raid.

More than 30 missile attacks have been carried out on US army installations, US oil companies and the US embassy since October 2019. For the most part, these caused minimal damage, as they were randomly carried out from a considerable distance with unguided Katyusha rockets.

In March, however, one of these attacks on the Taji military base north of Baghdad killed two US nationals and a British soldier. German soldiers are also stationed at Taji. They are involved in training members of the Iraqi army. The US command in Iraq has now announced plans to withdraw from the country, leaving only high-ranking instructors behind. Other partners in the anti-IS coalition are also leaving with the Americans. 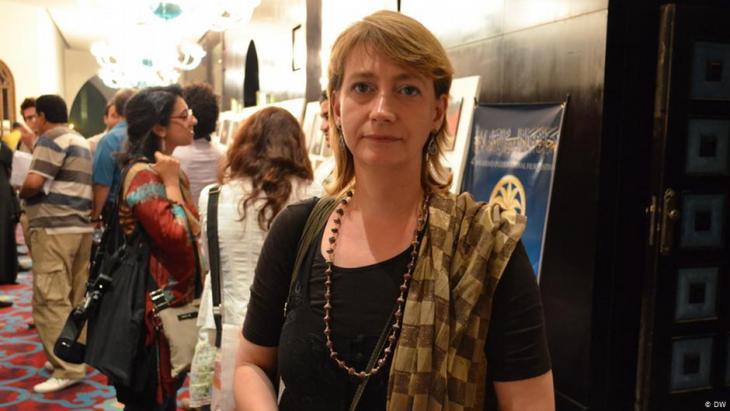 Hella Mewis (pictured here), a German national who ran arts programmes at the Iraqi art collective Tarkib, was kidnapped outside her office in central Baghdad on Monday. A friend said that she had been worried following the killing of Hisham al-Hashemi, an Iraqi scholar who had been supportive of anti-government protests last year. Widespread anti-government and anti-corruption demonstrations erupted in Baghdad and Iraq's Shia-majority south in 2019. Around 550 people died and dozens more were kidnapped. This year has seen a worrying spike in the abduction of foreigners, who have not been targeted in several years

The raid on the militia headquarters was controversial because Kata'ib Hezbollah is part of the leadership circle of the Popular Mobilization Forces (Hashd al-Shaabi), which fought successfully against IS and was now supposed to be integrated into the Iraqi security structure. Al-Kadhimi justified his approach by saying he planned to take decisive action against all groups positioning themselves outside the law.

He went on to say that no armed groups are allowed to exist alongside the Iraqi security forces. Kata'ib Hezbollah is, however, known for carrying out operations that have not been ordered by the supreme commander, currently Al-Kadhimi. But just a few days after the arrest of the Hezbollah fighters, those individuals were released. "He will fail," militia spokesman Mohammed Mohie predicted in an interview with the Arab news channel Al Jazeera.

In the current climate, demonstrators rarely take to the streets to show their support for their government. In Iraq, as elsewhere in the region, thousands protested against their politicians for more than a year, engaging in bloody street battles with security forces and establishing a tent city in the heart of Baghdad. Eventually, the Tahrir movement brought about the resignation of the last prime minister, who did too little to fight corruption, introduce reforms and above all involve young people in the political process.

With the support of the protest movement

Now the tide has turned – for the moment at least. The new head of government, Mustafa al-Kadhimi, needs the support of the protesters to push through his agenda, which is also theirs, namely to clean up the political swamp that is Iraq – a swamp that appears almost impenetrable, insurmountable.

Al-Kadhimi is asking the young demonstrators to help him, so that their declared revolution doesn't end in nothing. Despite the coronavirus, a curfew and the obligation to wear masks, they took to the streets last week, crossed the Sinak Bridge over the Tigris and marched into the Green Zone, the heavily fortified government district, where they chanted encouraging slogans outside the Prime Minister's office.

But a deadly warning for him and the demonstrators came at once. On 7 July, Hisham al-Hashemi was hit by four bullets while sitting in his white SUV outside his house in the Baghdad neighbourhood of Zayouna. His children had to watch as their father was recovered from the car. Hashemi died in hospital a short time later. He was a good friend of Al-Kadhimi and viewed as the PM's most important adviser on matters concerning extremism. 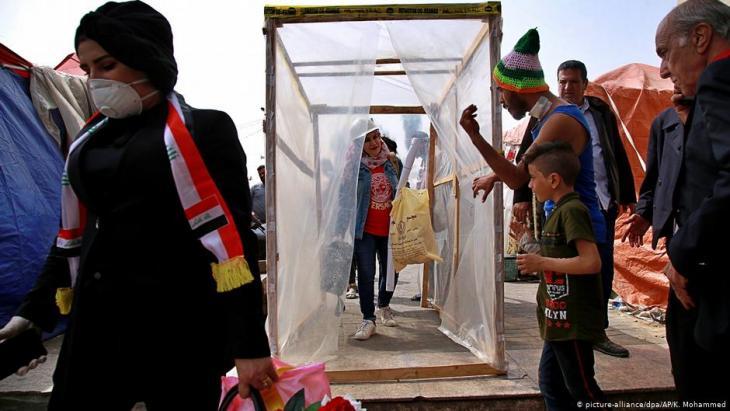 Undeterred: despite the coronavirus, a curfew and the obligation to wear masks, protesters took to the streets last week, crossed the Sinak Bridge over the Tigris and marched to the Prime Minister's office, where they chanted encouraging slogans. Pictured here earlier this year: demonstrators on Tahrir Square in Baghdad pass through a makeshift disinfection tunnel erected by the protest movement to help prevent the spread of the novel coronavirus

Shia militias – a state within a state

The 47-year-old was one of the few people who understood the inner workings of extremist groups right down to the last detail. He knew who led the local offshoots of IS, the role played by Sunni tribes and their representatives and how IS financed its terror campaign. In more recent times, his research focused increasingly on the powerful Shia militias, some of which evade government control and are forming a state within a state steered by Iran's Revolutionary Guard. Hashemi's murder is therefore being seen as a warning to the prime minister not to move too decisively against Iran's influence and interests.

"Al-Kadhimi could succeed nevertheless," says Jacob Lees Weiss, researcher at the Jamestown Foundation in Washington and an expert on Iraq, "if he strikes a balance." He needs to avoid direct conflict with Iran while at the same time demonstrating strength in domestic and foreign policy matters, says Lees Weiss.

First and foremost, says Lees Weiss, he needs to make an economic gesture and pay the Hashd al-Shaabi militiamen a decent wage. Iran's influence would then disappear because Tehran is currently mired in severe financial difficulties and is no longer able to meet all its obligations to its militias in Iraq.

A report by the Iraqi news agency NINA on 18 July is evidence that Al-Kadhimi is set to continue his clean-up. According to the report, the Iraqi government has decided to disarm political parties and clan leaders. This decree initially applies to the south of the country, the province of Basra. In recent months, there has been a rise in the number of bloody clashes between feuding clans there, a source of great concern to residents of the southern metropolis.

Because militias and clans are able to cross the border to Iran at Shatt al-Arab with little or no hindrance, these crossing points to Iraq's neighbour are now being secured. Modern technology is to be installed in Shalamcheh and Safwan to ensure border traffic surveillance is as full and complete as possible. New handling facilities are being built. The bulldozers and diggers have already arrived.

The protests in Iran have entered their third week with no indication that Tehran is prepared to address the demands that are echoing through the streets. Radio Farda’s Hannah ... END_OF_DOCUMENT_TOKEN_TO_BE_REPLACED

Just as the Islamic Revolution fundamentally changed Iran 43 years ago and had an impact far beyond the country's borders, the current wave of protests sweeping the country is set ... END_OF_DOCUMENT_TOKEN_TO_BE_REPLACED

The death of Mahsa Amini at the hands of Iran's "guardians of morality" is only the latest, tragic example – in a neverending chain of state repression and excessive police ... END_OF_DOCUMENT_TOKEN_TO_BE_REPLACED

In "Iran. Die Freiheit ist weiblich", journalist Golineh Atai describes the dogged resistance of courageous Iranian women against the Islamic Republic and the mullahs who have ... END_OF_DOCUMENT_TOKEN_TO_BE_REPLACED

Iranian artist Parastou Forouhar has lived in Germany since 1991. Full of rage, just like the protesters, she hasn't yet given up on the idea of justice. By Julia Hitz END_OF_DOCUMENT_TOKEN_TO_BE_REPLACED

Fariduddin Attar’s "The Conference of the Birds", one of the seminal works of Islamic mysticism, has recently been published in sumptuously illustrated German translation. It ... END_OF_DOCUMENT_TOKEN_TO_BE_REPLACED
Author:
Birgit Svensson
Date:
Mail:
Send via mail

END_OF_DOCUMENT_TOKEN_TO_BE_REPLACED
Social media
and networks
Subscribe to our
newsletter