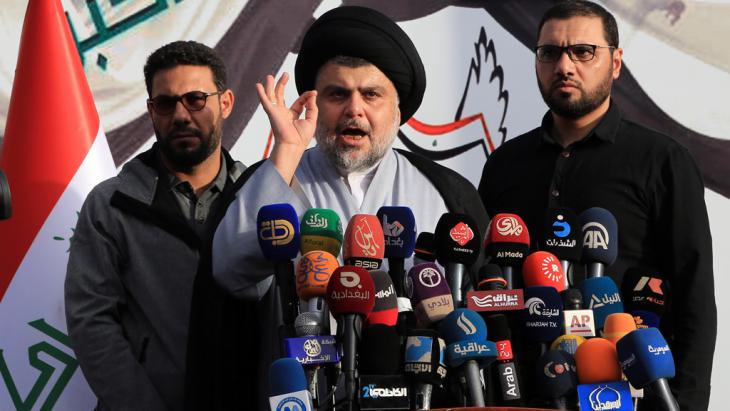 Demonstrators have gathered in Baghdad to protest Iraq's government every Friday for months. The Shia cleric Muqtada al-Sadr is using the movement to stage his political comeback. Birgit Svensson reports from Baghdad

"We'll be back!" demonstrators threatened as they withdrew from the parliament building in the high-security Green Zone on Monday to return to Tahrir Square, in the heart of Baghdad. Every Friday, Iraqis from all social strata have gathered there to protest the government.

They began by demanding better water and power provisions, but are now calling for political reforms, a government reshuffling and an effective fight against corruption. The movement was started by artists and then joined by activists. Now it is being led by Muqtada al-Sadr. When the protests were in danger of fading, the influential Shia cleric called in his supporters and took control of the movement. Fuelled by al-Sadr, the situation escalated dramatically at the end of April.

Thousands of demonstrators recently stormed the heavily guarded government quarter on the western bank of the Tigris and occupied the parliament building for three days. "All power to the people!" was their cry. The throng rushed past razor wire and security blocks, overpowering watchmen and bodyguards.

The Green Zone - which houses parliament, the prime minister's government headquarters, the Defence Ministry and several foreign embassies and non-governmental organisations - suddenly seemed as porous as Swiss cheese. Security forces refused to fire upon unarmed protesters. Witnesses say that many of the guards were "paralysed with horror." 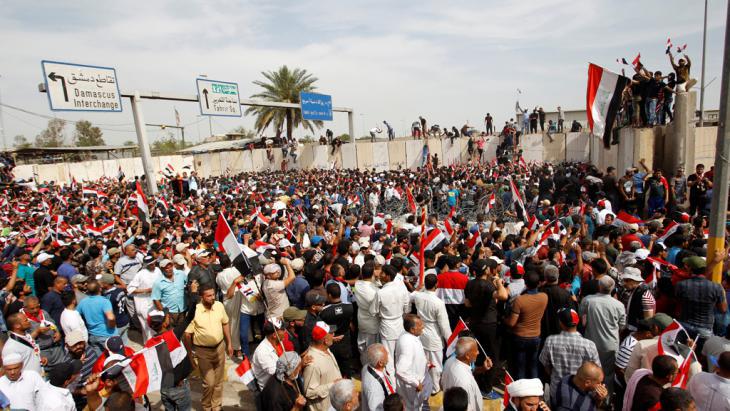 Targeting the heart of the political system: at the end of April, rioting Iraqi demonstrators temporarily stormed the parliament in Baghdad′s high security Green Zone, aggravating the country′s political crisis still further. Supporters of the Shia cleric Muqtada al-Sadr occupied the House of Representatives. They demanded a cabinet of independent technocrats be set up to halt political corruption. The politicians fled the building, while the demonstrators partied outside

The situation must have been gratifying for the 42-year-old al-Sadr.

Ten years ago, al-Sadr was a rebel feared by all. He was known to be angry, radical and violent. His supporters roamed the streets of Baghdad, kidnapping and massacring Sunnis, terrorising entire neighbourhoods and helping to speed the city's segregation along religious lines; many such divisions still exist today.

The outbreak of the three-year civil war was largely attributed to the Mahdi Army, al-Sadr's private militia, which consisted of nearly 50,000 men. They formed death squads and killed many of those who had been connected to the overthrown government of Saddam Hussein. With such actions, al-Sadr also exacted bloody revenge for the murder of his father, the highly respected Shia Ayatollah Mohammed Sadiq al-Sadr, at the hands of Saddam's henchmen. The Baghdad neighbourhood Saddam City was renamed Sadr City.

Master of the U-turn

The United States was not spared al-Sadr's wrath either. His militiamen claim to have used no less than 6,000 improvised explosive devices in their fight against US forces. When the United States issued an arrest warrant for the "Shia terrorist," he fled to Iran to engage in religious studies in Qom, his office announced.

After US troops left Iraq in 2012, al-Sadr surprised everyone by returning to pray alongside a Sunni imam in Baghdad's Abdul Qadir al-Kilani mosque. The shared worship was intended to symbolise the reconciliation of the two denominations and would be the first in a series of astonishing U-turns by al-Sadr.

While his supporters had taken up government posts and supported Prime Minister Nouri al-Maliki, al-Sadr suddenly joined Sunni demonstrators in protesting against al-Maliki and calling for more rights and political participation in what had become a Shia-influenced Iraq. 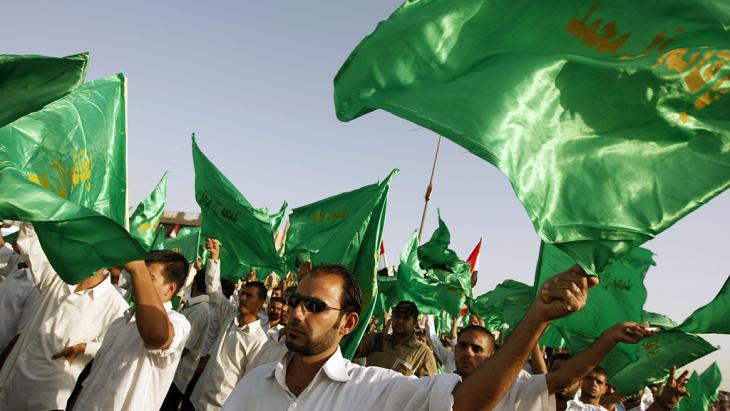 Muqtada′s questionable "Peace Brigade": heading up the protests against state cronyism is the Shia cleric Muqtada al-Sadr – one of Iraq′s most notorious political figures. The 42-year-old formerly commanded the Mahdi Army, which pursued a policy of armed conflict against the occupying U.S. forces. For months now, he has been regularly mobilising his supporters to take to the streets demonstrating for reform

He instructed his Mahdi Army to lay down its arms and announced that he would withdraw from politics. With the arrival of "Islamic State," the man with the black turban and greying beard dubbed his Mahdi Army a "Peace Brigade."

Talk of al-Sadr's withdrawal from politics has since ceased. Events have indeed moved in quite the opposite direction: at a Baghdad rally on 26 February, he publicly criticised al-Maliki's successor, Haider al-Abadi. "The prime minister will have to act as of today," he told the masses gathered at Tahrir Square.

Thousands of people had come to hear al-Sadr's message. In the hours before his appearance on an improvised stage, the streets of Baghdad's Karrada neighbourhood had been cordoned off and security forces had gathered.

"Today we stand at the gates of the Green Zone," al-Sadr said as he peered out over the Tigris bridge and toward the government district. "Tomorrow we will be inside." Great cheers broke out among the demonstrators: "No to the thieves within, yes to reforms!" Two months later, deeds followed words as crowds stormed the Green Zone.

Iraq still has no government. At a time when the general public is seething with anger over rampant corruption, the war on terror is robbing the country of its last resources. Oil prices are in free fall and are dragging the economy into the abyss along with them. The time seems ripe for demagogues.

Iraq is struggling to tackle its most pressing problems - fighting Islamic State and unifying the country - with an ineffective political class that is unable to rise above its own internal trench warfare.

Muqtada al-Sadr has read the writing on the wall. The question is whether he will use the situation to serve his own ends. "Things don't seem to be in better hands with him," a demonstrator at Tahrir Square said recently. "Clerics instead of politicians? Is that the answer? I fear for my country."

Home
Print
Newsletter
More on this topic
Protesting corruption and mismanagement in Iraq: Caught in the spotlightPopular unrest in the Middle East: Who says popular demand for change is off the agenda?Interview with Wilfried Buchta on the rise of IS and the fall of Iraq: "Iraq is irreversibly split"
Related Topics
'Islamic State' | IS, Economy, Haider al-Abadi, Iraqi opposition, Muktada al-Sadr, Oil, Shia Islam | Shiite Muslims, Sunni-Shia tension
All Topics

The clashes in Baghdad between supporters of Muqtada al-Sadr and pro-Iranian militias show that an intra-Shia power struggle is in full swing. An analysis from Cairo by Karim El- ... END_OF_DOCUMENT_TOKEN_TO_BE_REPLACED

Bachtyar Ali sends the hero of his latest novel – "Mein Onkel den der Wind mitnahm" – literally flying. Jamshid is so thin after his years as a political prisoner that a gust of ... END_OF_DOCUMENT_TOKEN_TO_BE_REPLACED

In this essay, renowned Lebanese journalist and writer Hazem Saghieh asks whether the Arab Levant, which stretches from Iraq in the east to Egypt in the west, will remain an ... END_OF_DOCUMENT_TOKEN_TO_BE_REPLACED

Climate change is taking its toll on communities in Iraq. Younes Ajil turns on the tap in his home but nothing comes out. Villages in the south of the drought-hit country are ... END_OF_DOCUMENT_TOKEN_TO_BE_REPLACED

END_OF_DOCUMENT_TOKEN_TO_BE_REPLACED
Social media
and networks
Subscribe to our
newsletter