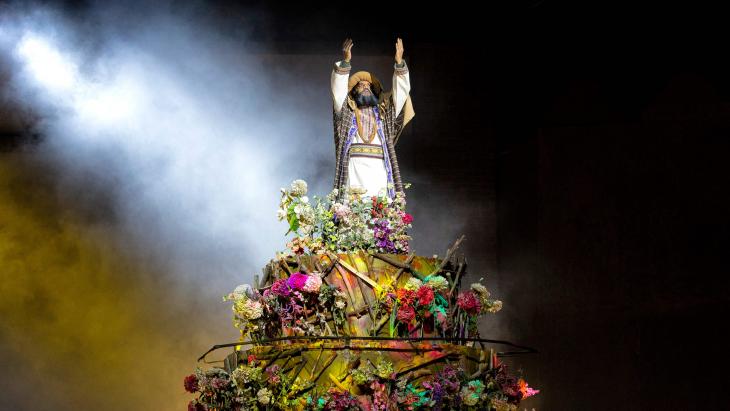 Dubbed the "biggest theatrical production in Iraq", the pro-Iran Hashed – integrated into government forces in 2019 – has sought a captive audience in southern Iraq's impoverished, predominantly Shia Muslim city of Basra.

The events of the play stretch from the dawn of time in the Garden of Eden to more recent events – most notably Washington's killing of Iranian general Qassem Soleimani and the Hashed's own deputy leader Abu Mahdi al-Muhandis.

Its Iranian director, Said Ismaili, explained that the play centres on the concept of the "just and the unjust".

Iran and its allies across the Middle East have in recent days held emotional commemorations for Soleimani and Muhandis, who were assassinated in a U.S. drone strike in the Iraqi capital Baghdad on 3 January 2020.

Iranian President Ebrahim Raisi has vowed revenge against former U.S. President Donald Trump unless he is tried over the killing of the revered commander.

In Basra, the play was introduced as a "joint production between Iraqi and Iranian artists", featuring 140 actors, special effects, and even horses and camels.

On stage, the devil tempts Adam to bite into the forbidden fruit surrounded by wisps of smoke. Another scene, set aeons later, features the battle of Karbala, the founding event of Shia Islam.

Later, shots crackle as actors take on the role of black-clad jihadists of the Islamic State group, who disembark from a pick-up truck bearing the group's black flag. But they are no match for the Hashed fighters.

Plumes of fire explode on the scene and, ultimately, the play shows the Hashed and Iraqi forces emerging victorious.

Formed in 2014 after a fatwa from Iraq's highest Shia authority, Ayatollah Ali Sistani, the Hashed played a key role in the defeat of IS alongside Iraqi forces backed by the U.S.-led coalition.

In the years since Iraq announced its "victory" over the group in late 2017, the Hashed has gained considerable social and political influence, notably through its political arm, the Fatah (Conquest) Alliance.

The organisation has its own media outlets, film productions and even football and basketball teams.

Detractors of the Hashed accuse it of acting on Iran's behalf, and Fatah's political influence has been undermined by a relatively poor performance in October elections – with the group alleging the polls were marred by "fraud".

"From the point of view of a cold war... our weapons must always be ready," the play's director said.

But Ismaili also referred to a "soft war", unfolding through "cultural and artistic spaces".

The play helps the Hashed tell its stories to people.

"There are people, our children for example, who are ignorant of certain things," spectator Ali Soueid said. "They need something like this to understand what happened in the battle... how people were killed."    (AFP)

More on this topic
Israeli attacks on bases in Iraq: Is war with Iran on the horizon?"Islamic State" in Iraq: Beware the jihadist hydraThe role of Qassem Soleimani in Iraq: Reining in the lion
Home
Print
Newsletter
MoreAll Topics

END_OF_DOCUMENT_TOKEN_TO_BE_REPLACED
Social media
and networks
Subscribe to our
newsletter