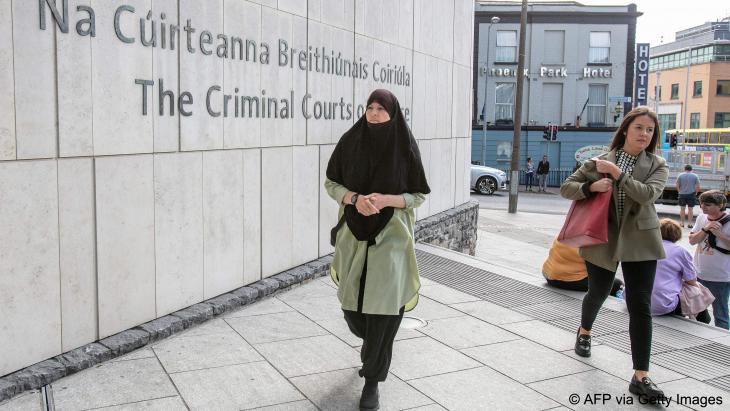 Judge Tony Hunt said the 40-year-old mother of one, from Dundalk on Ireland's east coast, was a low risk for reoffending. But he said Smith, a Muslim convert, went to Syria with her "eyes wide open" and had shown no remorse for her actions.

Smith, who arrived at court wearing a black hijab, was convicted in May of belonging to the banned terror group between 2015 and 2019. She is the first person to be convicted in an Irish court of an Islamic terrorist offence committed abroad. Smith could have faced a maximum sentence of eight years for membership of a proscribed terrorist organisation.

Judge Hunt rejected her lawyer's plea to impose a suspended sentence but heeded his call for a jail term at the lower end of the scale. Her legal team has asked the court to allow Smith to be released on bail, pending an appeal.

Smith was acquitted by three judges on a separate charge of financing terrorism by sending 800 euros ($810) to aid medical treatment for a Syrian man in Turkey.

During her nine-week trial, prosecutors outlined how Smith – who was a member of the Irish Defence Forces from 2001 to 2011 – travelled to IS territory in 2015 following a conversion to Islam.

In 2012, she went on pilgrimage to the Muslim holy city of Mecca in Saudi Arabia and expressed a desire on an Islamic Facebook page to live under Sharia law and to die a martyr.

The court was told that she bought a one-way ticket from Dublin to Turkey, crossed the border into Syria and lived in Raqa, the capital of the self-styled IS caliphate. At the time, the hard-line Islamists ruled over vast swathes of Syria and Iraq, attracting thousands of foreign fighters to their cause before the group's territorial defeat in the region.

As IS lost ground to a US-led coalition on the battlefield and towns and cities under its sway fell, Smith was forced to flee Raqa and then Baghouz, their last remaining stronghold, before returning to Ireland. She was arrested on arrival at Dublin airport on 1 December 2019 with her young daughter.

During sentencing arguments, her lawyer Michael O'Higgins asked for her to be spared jail as she had already served a custodial sentence in Syrian camps. He referred to Smith's acute psychological state, after she was described in expert reports as "damaged" and "vulnerable", emphasising the "appalling" conditions she had faced with her young child. The court heard that Smith was held in the notorious Al-Hawl and Ain Issa refugee camps in northern Syria while she waited to be sent home to Ireland.

O'Higgins explained how IS members in the camps imposed cruel punishments on other refugees including, in some cases, setting their tents on fire and killing them in the process.

The defence lawyer also asked the court to consider that Smith has lived with a 13-hour daily curfew as part of her bail conditions since 2019. (AFP)

More on this topic
Iraq: IS returnees met with tolerance – and distrustDe-radicalising young people: Is there a way to stop jihadists in Europe?Islamic State on trial: Prosecuting IS returnees in Germany takes the law's longest armReturning IS fighters: Expatriation hardly an option
Home
Print
Newsletter
MoreAll Topics

END_OF_DOCUMENT_TOKEN_TO_BE_REPLACED
Social media
and networks
Subscribe to our
newsletter