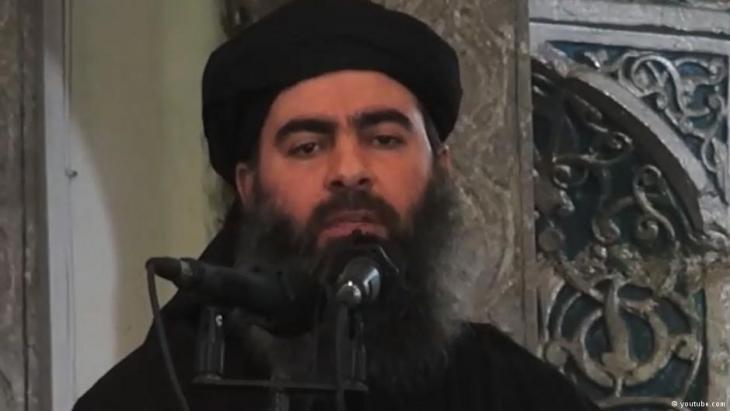 ISIS leader in Iraq
The new face of Jihadism?

The Islamic State in Iraq and the Levant (ISIS) has been active in Syria for two years now. It currently has around 5,000 fighters there – and the numbers are growing. Aron Lund, who has written studies on Syria's fighter landscape for the Swedish Institute for International Affairs, explains the terrorist organisation's strategies to Mona Sarkis

Aron Lund: Partly clerics and businessmen from the Gulf. Mainly, however, ISIS supplies itself: through protection money; through fees, which it collects at its border barriers; through the sale of previously captured weapons, the control of certain oil fields in northern Syria.

Its fighters allegedly receive 400 US dollars per month, which in Syria is quite generous. Do foreign jihadists also receive this salary?

Lund: I think the opposite is true: ISIS financially benefits from them. Many foreigners go to Syria intending to die fighting or commit suicide bombings. They bring with them capital, either their own or raised additionally, and buy their own weapons.

Accordingly, the foreigners are not only cost-effective cannon fodder, they also contribute to the livelihood of ISIS. Is this the reason why they are so welcome in its ranks?

Lund: Sure. But foreign jihadists are nothing new in the Middle East. They were in the networks of al-Qaida in Afghanistan and Iraq. ISIS continues this tradition with pride. According to ISIS, the foreigners are exemplary Muslims who are walking the path of the Prophet by leaving their homes to contribute to the establishment of the Islamic State. 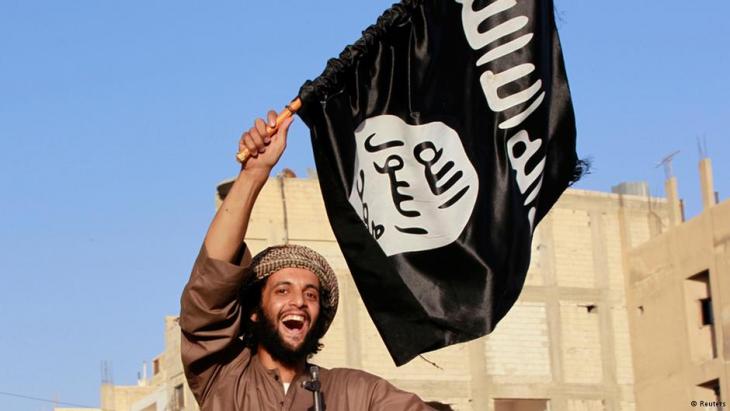 Following its startling advances in June, ISIS declared a "caliphate" in parts of Syria and Iraq. Aron Lund says that ISIS and al-Qaida seem to have been competing for access to the Syrian war, which brought with it a lot of resources, foreign fighters, weapons, and prestige within the global jihadist movement

How does ISIS back its religious ambitions? Does it conduct any Koranic exegesis? Does it publish treatises or manifestos?

Lund: They've distributed religious sermons by their own leaders and scholars rather than a normal political manifesto. This is common for jihadi groups, since they think that the Koran is the blueprint for human society. You don't need to add anything, it's just a question of implementing it properly.

The break between ISIS and al-Qaida last year caused the biggest scandal in the history of the terror network. How did it come about?

Lund: Before April 2013, Abu Bakr al-Baghdadi led a group called the "Islamic State of Iraq", which most people considered to be part of the al-Qaida network. But he didn't want to limit his jihad to Iraq. Already in 2011 he had expanded covertly in the form of Jabhat al-Nosra, a group he helped create in Syria. Then, in April 2013, he demonstratively renamed his group "Islamic State in Iraq and the Levant" and said that Jabhat al-Nosra should join it. Many Jabhat al-Nosra leaders refused, and instead shifted their allegiance directly to al-Qaida's highest emir, Ayman al-Zawahiri, who opposed Baghdadi's decision.

Many things were involved, including personal and ideological disputes. But at the heart of it there seems to have been a competition for access to the Syrian war, which brought with it a lot of resources, foreign fighters, weapons, and immense prestige within the global jihadist movement. The result of this dispute was that, in summer 2013, al-Baghdadi accused al-Zawahiri of misinterpreting the commands of God and the Sharia. This dispute gradually developed into a complete split between ISIS and al-Qaida. The attempts to reconcile them ended when ISIS and Jabhat al-Nosra began fighting in Syria in early 2014.

What are the differences between al-Baghdadi's and al-Zawahiri's opinions?

Lund: In 2005 al-Zawahiri already criticised the extremist leader Abu Musab al-Zarqawi, who was later killed, for his excessive violence against the Shiites in Iraq. Generally speaking, al-Zawahiri and Jabhat al-Nosra have argued for tactical moderation and cooperating with other Islamists, while ISIS is more uncompromising and unwilling to share power. 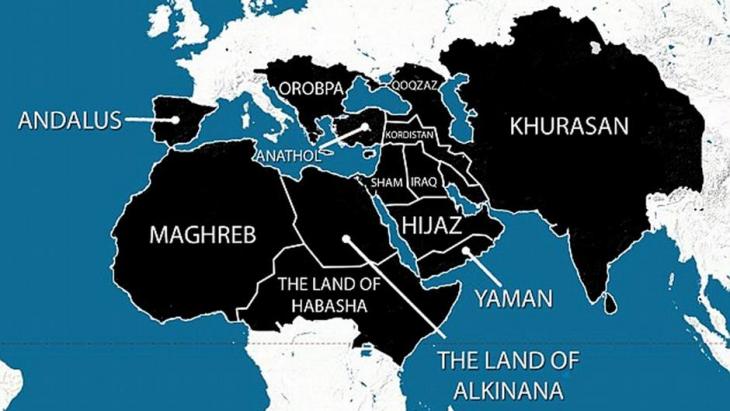 Map of the region depicting ISIS' alleged ambitions. Al-Qaida leader Ayman al-Zawahiri "has argued for tactical moderation and cooperating with other Islamists, while ISIS is more uncompromising and unwilling to share power," comments Aron Lund

Since the split in 2013, each group has started to define itself in opposition to the other and ideological differences are emerging that were not present from the beginning. The tensions sometimes culminate in absurdities. Al-Baghdadi accused al-Qaida, for example, of respecting the Sykes-Picot Agreement. He justifies this by saying al-Qaida wanted him to stay in Iraq, within borders drawn by the colonial powers. But of course al-Qaida doesn't respect these borders; it simply wanted al-Baghdadi contained. It is a manufactured difference to justify the split, quite typical in political movements.

There might be a sort of generational conflict going on in the Salafist-jihadist movement. After all, al-Zawahiri is 64, al-Baghdadi 43 years old, and most of the older generation of clerics have sided with al-Zawahiri. One shouldn't overstate the difference, but in some ways ISIS seems to represent the type of ultra-violent jihadism that grew out of the Iraq war and jihadist propaganda on the Internet, whereas al-Qaida still has roots in Afghanistan and the small, secret, disciplined terrorist networks of the 1980s and 1990s.

ISIS is currently enjoying a wave of success in Iraq, which is likely to gain it even more support from foreign jihadists. How deeply is the organisation rooted in Iraqi and Syrian society?

Lund: Al-Baghdadi's group has been active in Iraq for much longer than in Syria. In addition, the regions of Iraqi society where ISIS operates tends to be conservative and tribal, which is something ISIS has exploited effectively by seeking alliances with clan leaders. Syrian society is generally much less tribal. But where it is, you'll find ISIS too: along the Euphrates, from east of Aleppo to Raqqa and Deir Ezzor, which ISIS probably wants to conquer next.

But ISIS is seeking the support not only of the traditional clans but of the whole Sunni Muslim population, or at least the conservative religious segment. To some extent it is succeeding. It's the same phenomenon as with the Taliban: extremist Islam is brought into a society in which it has no strong roots. It gets a certain degree of acceptance because it implants sharia courts, which provide basic law and order amid the chaos of war. The residents must fear punishment for smoking, but they do not need to be afraid of being robbed, because ISIS respects Sharia which protects private property.

Amid the chaos of war, any eradication of anarchy must have a stabilising effect. However, the war in Syria broke out in order to fight a dictatorship. Many are now wondering why ISIS doesn't fight the government forces?

Lund: ISIS does fight the Syrian government, although it has been preoccupied with other rebels and Kurdish militias. They consider all enemies of the [Islamic] "State" to be equally bad. Its calculation is that as soon as the "State" is fortified, it will proceed against the regime in Syria, just as it is now doing against the regime in Iraq.

Home
Print
Newsletter
More on this topic
The Syrian conflict and the advance of ISIS: Assad and the myth of the lesser evilThe Iraq crisis and the West: The ugly new order in the "Fertile Crescent"Iran's role in the Iraq conflict: An ally, but not a puppet
Related Topics
'Islamic State' | IS, Al-Qaida, History of Islam, International terrorism, Iraq War, Jihad, Jihadism | Jihadists, Sharia, Sunni-Shia tension
All Topics

Education for girls and women is still possible in Afghanistan, says Reinhard Eroes of the Kinderhilfe Afghanistan initiative. In interview with Elisa Rheinheimer, he talks about ... END_OF_DOCUMENT_TOKEN_TO_BE_REPLACED

A lawmaker in Pakistan's rugged northwest was sipping tea with voters when his phone chirped to life – the Taliban were calling with a demand for 'donations'. "We hope you won't ... END_OF_DOCUMENT_TOKEN_TO_BE_REPLACED

Cries of "Benghazi!" still resonate across the USA ten years after a deadly terrorist attack in Libya killed the U.S. ambassador and three other Americans. Ethan Chorin re-tells ... END_OF_DOCUMENT_TOKEN_TO_BE_REPLACED

Sufism has fluid boundaries. Just like Islam, Sufism is inconceivable without its late antique roots. Then again, it has also exerted an influence on Hinduism. Moreover, the Sufic ... END_OF_DOCUMENT_TOKEN_TO_BE_REPLACED

Journalist Waslat Hasrat-Nazimi was forced to flee Afghanistan with her family as a child and grew up in Germany. To mark the publication of her book "The Lionesses of Afghanistan ... END_OF_DOCUMENT_TOKEN_TO_BE_REPLACED

Just as the Islamic Revolution fundamentally changed Iran 43 years ago and had an impact far beyond the country's borders, the current wave of protests sweeping the country is set ... END_OF_DOCUMENT_TOKEN_TO_BE_REPLACED
Author:
Mona Sarkis
Date:
Mail:
Send via mail

END_OF_DOCUMENT_TOKEN_TO_BE_REPLACED
Social media
and networks
Subscribe to our
newsletter