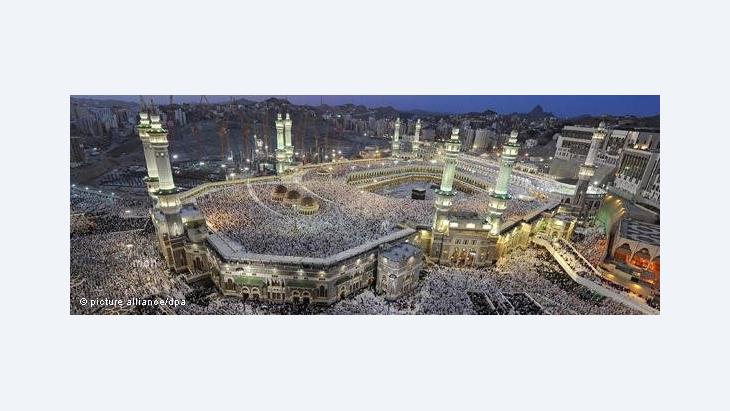 When pilgrims walk around the Kaaba in Mecca these days, an increasing number of them will have their friends with them: either in person next to them, or in the social networks they connect to via their smartphones. This helps them share their impressions from the pilgrimage with the world in real time.

Some of them use their smartphones for practical purposes, too: they look up hajj rituals, connect with people they've met or they communicate with their friends and families at home.

Local authorities also use new media to offer services to pilgrims. Hostels and local guides have their own Facebook sites targeting pilgrims. The hajj pilgrimage – the largest religious gathering in the world – has entered the digital 21st century.

A young pilgrim uses Twitter to perform a religious duty: he asks his friends for forgiveness for any sin he may have committed against any of them. His tweet continues "Tomorrow I'll be in the holy city of Mecca. Don't be cross with me should I have annoyed any of you ever :-)." 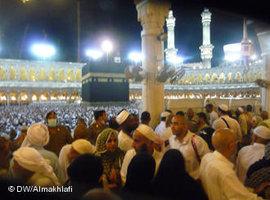 Pilgrims use smartphones to find their way to the Kaaba, find accomodation and to communicate with their families at home

​​It is a Muslim tradition to ask God for forgiveness in Mecca for all wrong deeds committed against oneself or others. But Muslims needs others to forgive them first. Twitter provides handy access to anybody whom pilgrims couldn't contact before their departure.

Social networks don't just play a role when pilgrims prepare their hajj, but also when they perform the actual hajj rituals in Mecca.

Some pilgrims share their feelings during hajj online. "Peace be with all of you. I'm currently in the Holy City of Mecca. I've just come back from Kaaba... lost for words," a pilgrim posts in Arabic.

Others upload videos to YouTube with funny encounters or interesting people. The video 'The smallest pilgrim in the world in Mekka' for instance shows a pilgrim who is barely one meter tall. Other hajj pilgrims share their political and economic views.

"I think Mecca should be a city for all Muslims," a female pilgrim writes. "The returns from the pilgrimage should be distributed amongst all Muslim people and not only go to one country. Money from hajj should go into projects which help people in Somalia."

Twitter is also used by Muslim scholars who give advice to pilgrims. Sheikh Ayed Al-Qami writes: "Pilgrims who have done hajj before shouldn't go to Mecca again. They should rather give their money to other Muslims who aren't able to afford hajj."

The Facebook page of a European pilgrim is full of pictures and texts uploaded from his smartphone. This way he keeps his friends updated about his hajj route. Pilgrims traditionally stop in Kaaba, Mina, Arafat and Muzdalifah, all several kilometres away from one another.

The European Muslim updates his status frequently to say where they're going next, where to sleep, when to leave to go the next stop and which means of transport to use, which helps other smartphone pilgrims save money while travelling.

Beyond apps, Apple's 'iPhone Islam' website offers free smartphone applications for pilgrims. One app contains all hajj prayers, some apps are available in several languages, others contain giant encyclopaedias with religious teachings in form of audio files or e-books.

"Hajj apps contain information which some pilgrims could easily miss out on during hajj. Many thanks to the developers of this website. I shall pray for them during my hajj this year...," reads one pilgrim's comment on the website.

Home
Print
Newsletter
More on this topic
Interview with the Saudi-Arabian Writer Raja Alem: Elegy for a Lost EraIsmaël Ferroukhi's "The Great Journey": On the Way to Mecca in a Rickety Peugeot
Related Topics
Lifestyle
All Topics

The devaluation of the Egyptian pound combined with rising food prices is taking its toll on Egypt. More and more people are slipping into poverty. Karim El-Gawhary reports from ... END_OF_DOCUMENT_TOKEN_TO_BE_REPLACED

Since returning to power in Afghanistan, the Taliban have steadily eroded the rights and opportunities of women and girls, particularly their access to education. But Afghans are ... END_OF_DOCUMENT_TOKEN_TO_BE_REPLACED

The book "The Invention of the Maghreb: between Africa and the Middle East" prompts us to review basic terminology. This includes terms that we use almost every day as if they are ... END_OF_DOCUMENT_TOKEN_TO_BE_REPLACED

Tunisia has been going through a severe economic and political crisis in recent years. More than one in three young people there are unemployed. For many skilled, qualified and ... END_OF_DOCUMENT_TOKEN_TO_BE_REPLACED

At the end of every year, the team at Qantara.de gives you a run-down of the ten most-read articles on the site over the past 12 months. Here is a quick overview of the stories ... END_OF_DOCUMENT_TOKEN_TO_BE_REPLACED

The government in the Netherlands, one of the last European nations to abolish slavery, has made an historic apology. But some feel that there is still a long way to go. By Ella ... END_OF_DOCUMENT_TOKEN_TO_BE_REPLACED

It's good to see how Muslims are sharing their experiences online. But it's not just Facebook or twitter, numerous websites such as Flyhajj.com connect pilgrims and tour operators and make it easy to get quotes - the web in general offers endless opportunities for performing religious rites.

END_OF_DOCUMENT_TOKEN_TO_BE_REPLACED
Social media
and networks
Subscribe to our
newsletter