Skip to main content
Islam and Muslims in Germany

The Changing Image of Turks in Germany

An argument over a planned mosque has turned into a fundamental debate about Islam. People have come to be defined by their religion, and every Muslim is an enemy of the constitution. A view of the issues from Sanem Kleff and Eberhard Seidel 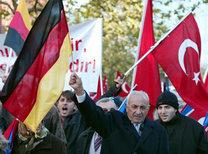 Over the last forty years, the Turkish minority in Germany has provided little justification for clash-of-cultures speculations, write Eberhard Seidel and Sanem Kleff

​​Turk, Muslim, enemy of the constitution - the discussion on Islam in Germany has reached a new level. The debate has been triggered by a trivial matter: the plans by DITIB, the Turkish-Muslim Union of the Authority for Religions, to build a mosque in Cologne.

Usually when mosques are planned, the arguments are about the height of the minaret, the provision of adequate car parking, or the possible Islamist connections of the organisation behind the mosque. But this debate is different; this debate goes to the roots.

"It's not the mosque, it's Islam that is the problem," wrote the author Ralph Giordano in a recent edition of the Frankfurter Allgemeine Sonntagszeitung. He argues that the teachings of the Koran are incompatible with the German constitution. Says Giordano: "I ask myself: how can someone for whom the Koran is holy live according to the constitution?"

The question of religion and constitution

The question is legitimate and can in principle be asked of believers of all three of the monotheistic religions who regard as authentic the texts which tell of the foundation and revelation of their religion.

Creationists, who see the creation story of the bible as factually true, are not easy to integrate into a modern state based on law and constitution. Those who are true to their texts find it hard to accept emancipatory views of the role of the sexes or freedom of sexual orientation.

Europe, the USA, and Turkey have all had sometimes bloody experience of these problems. It seems odd that the discussion on such issues is exclusively about Islam, and in the context of the plans to build a mosque.

And it is disturbing when such questions as these - published in the Frankfurter Allgemeine Zeitung of 25 July - suddenly emerge: "Is the argument about the mosque and the minaret really an argument on the part of Muslims about fantasies of world-wide conquest? Is the West really about to collapse, and is every new minaret to be a signpost pointing to the world of the future?"

How has it come about that Turkish Muslims in Germany (for the whole debate is really about them) have come to be suspected en masse of being enemies of the constitution, as Giordano implies? And why are migrants who have come from Turkey to find work compared to jihadis seeking world domination, as the Frankfurter Allgemeine Zeitung does in its politely rhetorical questions?

It has also never been noticeable for any substantial missionary activity. To explain this strange exaggeration, one has to analyse the way the debate about Islam has been conducted over the past few years.

Following the attacks of September 11th, interest focussed on the international organisation of the jihadis and their networks. It was a discussion that was overdue, but it was not about Turks. The focus was on gathering information and finding out more about the Who's Who of terrorism.

Everything changed with the murder of Theo van Gogh in November 2004. Suddenly it was not Islamism that was at the centre of attention, but Islam itself. The view that terrorism was an immanent characteristic of Islam became more influential.

The message changed to "it's not Islamism that is the problem, it's Islam." European intellectuals, and hundreds of journalists following in their wake, worked together to construct the image of a unified, homogenous, worldwide, violent Islam.

This new line could only be successfully transferred to Germany by turning Turks into Muslims and their religion into the most important thing about them. Since autumn 2004, the debate about integration and the Turks, which had been smouldering for decades, has been converted into one that is entirely about religion - and that means Islam.

If a Kurdish husband carries out an honour killing, there is no discussion about Kurdish tribal traditions; the crime is directly blamed on the Koran. If fifteen-year-old girls from Anatolian villages are forced into marriage, the debate is not about patriarchal village traditions, but about alleged legitimation of such actions in the Koran.

If parents who are organised in Islamist groups use standardised forms to excuse their children from coeducational sport lessons, attention is focussed not on the influence of Islamist organisations, but on the role of the woman in Islam.

And if one is looking at the educational failure of children coming from Turkish families who are detached from the educational process, the explanation is found in their religion, even though there are Italian children who are even less successful.

Generalisations about Muslims and Islam

The reality of the behaviour of the vast majority of Turkish families was systematically ignored, the complexity of their lives explained by just the one factor. The significant difference between Alevi and Sunni Turks, for example, had no relevance.

Nor did the way in which Muslims interpret the Koran in their daily life. Anyone who points out that daily life for most Muslims in Germany does not match the generalisations made about it finds himself quickly accused of sweeping problems under the carpet.

The Turks have an astonishing history behind them here in Germany. In the eighties and nineties, the Germans constructed an identity for them that was mainly based on national and ethnic criteria and assumptions, and they discovered incompatibilities on the basis of this construction. But now the Turks have been given a new image.

Without regard for social class, religious difference, and varied tradition, the Turks have come to be defined as a homogenous religious group. The one thing which unites is Islam. And Islam is in turn based on the Koran - an evidently violent document, which is incompatible with the German constitution.

The unavoidable conclusion of these generalisations and circular arguments is that anyone who declares himself to be a Muslim and does not publicly distance himself from the religion is an enemy of the constitution.

The progress of this public debate is having an effect. In the Cologne branch of the Christian Democrat party, support for the building of the mosque is rapidly declining. The state of Baden-Württemberg has introduced a citizenship test which is specially directed towards Muslims.

The new federal immigration law has restrictions which will particularly affect immigrants from Turkey. And it includes a catch-all provision allowing the expulsion of anyone who demonstrates behaviour which is "particularly opposed to integration."

Translated from the German by Aingal Flanagan

Sanem Kleff lives in Berlin and heads the project "Schule ohne Rassismus - Schule mit Courage" (School without racism - school with moral courage). Eberhard Seidel is a journalist, also living in Berlin. Both of them have been dealing for many years with the topic of Islamism.

Islam in Germany
On Overemphasizing Religion
Endless debates and frequent controversies on "the Muslims" and "Islam" in Germany continue to rage while a whole range of problems is completely ignored – the legal and economic situation of immigrants. By Mark Terkessidis

Muslims in Germany
Dangerous Ignorance
Far too little research has been done on the attitudes of Muslims toward the social and political system in Germany. This ignorance fuels conspiracy theories on "the Muslims" and terror, says Eberhard Seidel

German Architect To Build Mosque in Cologne
"Muslims Should Not Try to Hide"
In order to find an architect for their mosque, a Muslim community in Germany conducted an open tender process. Now the German non-Muslim Paul Böhm was awarded the first prize for his model. Thilo Guschas interviewed the architect

END_OF_DOCUMENT_TOKEN_TO_BE_REPLACED
Social media
and networks
Subscribe to our
newsletter