Plea for Competition between Values

Our dechristianized West is disturbed – to a greater or lesser degree – by the visibility of practising Muslims. Yet, whoever expects the secular state to treat different worldviews equally should not fear competition between value systems, writes the Islam expert Ludwig Ammann in his essay 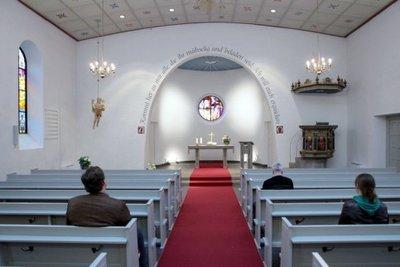 "Many Christians find it somewhat odd that people do something or refrain from doing something because it is God's will. Perhaps it would be different if the 'Judeo-Christian character' of our society was more than empty words," presumes Ludwig Ammann

​​At present, Turks are less integrated into society than other immigrants. This doesn't apply to every milieu, but, on average, it is the case. It is not a pretty state of affairs, not for the immigrants and not for the country of their dreams. Therefore, all attempts to improve the situation are welcome. A further debate on Islam, however, contributes very little. Any reading tutoring course or "Mama learns German" programme accomplishes far more.

Iranian high school students are more likely to complete their A levels than Germans, whereas Italians and Portuguese in the southwest, as do most Turks, attend only general education secondary schools. How is a debate that regards religious affiliation as the decisive hurdle going to be able to explain these differences? Many Iranian immigrants were academics, while those from southern Europe were farmers, who have more difficulties with educational success. This is only to be expected. Merely complaining or even changing religions will not change this fact. The only thing that will help is learning – on all sides.

As such, one could almost shelve the issue of Islam if it weren't for crescendo of anxieties expressed in compact catchwords – headscarf, Sharia, jihad! The Muslim as such must forever remain alien to the Christian West. Yet, here are some statistics. According to a 2009 study by the German Islam Conference, some 14 percent of Turks, 20 percent of Moroccans, and 38 percent of Iranians regard themselves as non-believers. Of the remaining Muslims, 34 percent rarely or never pray and only 34 percent pray daily, one of the core precepts of the Sharia and prescribed by an orthodox interpretation of the religion! This means that a "full-blooded" Islam that regulates every aspect of one's life is practiced by a minority of Muslims. 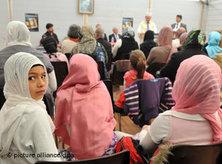 A "full-blooded" Islam that regulates every aspect of one's life is actually practiced by only a minority of Muslims, writes Ammann. Pictured: Day of the Open Mosque in Cologne, Germany

​​To discover what Muslims think on such issues as religious diversity, democratic rights, Sharia punishment, and learning German, the best thing is to simply ask them. This is infinitely better than brooding over some verses of the Koran and on that basis trying to assess what Muslims probably think. Then one would see that they respect other religions (98.1% approve), reject Sharia inspired punishments (90%), and support freedom of expression (96%) and free German courses (92%). From the look of things, this doesn't appear to be a hard-core rejection of our much-vaunted democratic customs.

Then where does this obstinate mistrust come from? I think that a selective view of three characteristics of the faith make Muslims seem alien to us. The first is that Muslims, although not all of them, only on average, are more religious than the long-established population. The same is true of Black African Christians, but, without the headscarf, they don't particularly stand out. In addition, the fact that many next-generation immigrants adhere to born-again revivalist Muslim movements annoys many observers deep down in their secular souls. What we see here is less a defence of the Christian West than that of a dechristianised West. 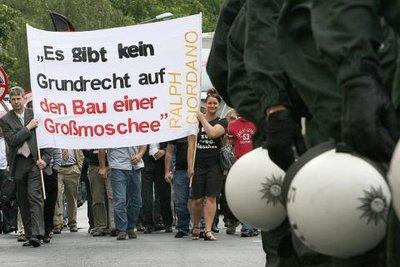 "There is no right to build a grand mosque," the banner reads. "What we see here is less a defence of the Christian West than that of a dechristianised West," states Ammann

​​Secondly, the belief by a section of the Muslim community in Sharia law is met here with incomprehension, even when those Muslims recognize the priority of secular law and practice their religious dogma of what is allowed and forbidden simply as a set of moral precepts. Many Christians find it somewhat odd that people do something or refrain from doing something because it is God's will. Perhaps it would be different if the "Judeo-Christian character" of our society was more than empty words.

If our cities also prominently featured Jewish men wearing sidelocks and Jewish women in wigs, then the piety of Islam would be recognized as cut from the same cloth as Orthodox Judaism. If Christians and former Christians read more from the Bible than Christmas stories and more from the Koran than verses referring to the sword, they would discover in the Koran a text deeply immersed in the Judeo-Christian tradition.

Thirdly, a section of the Muslim community is considerably more conservative than the majority of the long-established population. This begins with the prevalent literal belief in the Koran and expresses itself in conflict-laden attitudes towards sex and gender roles – attitudes that have been on the decline in Germany for decades.

A right to hold false beliefs 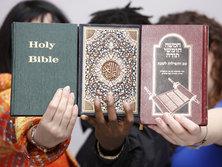 ​​The return of beliefs long overcome questions the dominance of the progressive canon of values and provokes intense backlash. This is understandable. Yet, it is a mistake to believe that the immigrant must share the predominant canon of values – from the constitution on up – in order to belong. Some 33 percent of Americans regard the Bible as the literal word of God and 55 percent feel that it should be "one " or "the only" basis for laws in the country. Homosexuality is frowned upon by 61 percent of Muslim Americans and 63 percent of evangelical Americans. This is unfortunate, but no American, liberal or not, would dare to take away the right of a fellow American to hold a different, more conservative viewpoint, even when it is one he opposes.

More religion through immigration means more conflict about values. Those who expect our secular state to treat those with different worldviews with an equal hand instead of repression, should not shun such conflict. Everyone has the same right to hold false beliefs – whether they are Muslims, Christians, or atheists.

END_OF_DOCUMENT_TOKEN_TO_BE_REPLACED
Social media
and networks
Subscribe to our
newsletter