Are the new generation of educated, professional Saudi women who are pushing for political change a vanguard or just a "westernised" elite? Jane Kinninmont reports 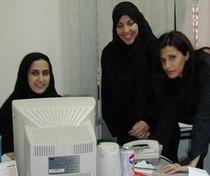 In the absence of far-reaching education and justice reforms serious progress will not take place for the majority of Saudi women, says Jane Kinninmont

​​In the only country in the world where women are forbidden to drive, one pioneering woman obtained a pilot's licence last year. This year, a few determined female students have embarked on Saudi Arabia's first ever engineering degree for women.

In the midst of rapid economic growth and social change, Saudi Arabia is a place of paradox, an extremely conservative desert kingdom where you can sit in the world's only gender-segregated Starbucks franchises and use a mobile phone that recites the Quran.

Former ruler King Fahd's decision to open state schools for girls in 1960 has created a generation of educated Saudi women, many of whom are now pushing for more political rights.

Some have built successful careers as academics, doctors, journalists and even engineers – no mean feat, given that ninety-five percent of Saudi women of working age are housewives, and that the concept of choosing a career instead of children is virtually unknown.

Since education is not compulsory and some families prefer not to educate their daughters, there is significant female illiteracy: the latest available World Bank figures show that in 2000 just under a third of Saudi women were illiterate, compared to only thirteen percent of boys.

According to Samar Fatany, chief broadcaster for Radio Jeddah's English service, women account for fifty-five percent of Saudi graduates but make up just under five percent of the workforce. Professional Saudi women cite Islamic texts and traditions that support a greater role for working women.

Fatany explains that the right of women to own and run their own businesses is guaranteed in Islam, and many Saudi businesswomen give the example of the Prophet Mohammed's wife Khadiga, who was a successful businesswoman.

In family law, women's problems stem from "traditions that are simply local customs rather than real Islam," according to family physician Maha Alatta. "Divorce and domestic violence are particular problems."

Many of Saudi Arabia's professional women tend to argue for greater rights within the framework of Islam, which is unsurprising in a highly religious country where only Muslims can be citizens, and where western feminism is often viewed as suspiciously irreligious and anti-family (not a universal trend, but generally true. And many feel patronised by their image in western eyes as passive, veiled victims.

Some, like Fatany, respond by citing "western" social problems like prostitution and drug addiction. But Nadia El-Azza, a US-educated engineer at the national oil company Saudi Aramco, says "my friends in the US remind me that women have problems there too. But at least they have a parliament where women can take part."

Women were denied the right to vote in last year's municipal elections, the country's first ever nationwide polls. Officials have suggested the franchise may be extended to women next time round, but this will not be until 2009 at the earliest. And since it took the government many months to actually set up the local councils after the election results came in, this timetable may be missed.

But in the meantime, two professional organisations have held elections where women have stood – and won. In November 2005, the Jeddah Chamber of Commerce and Industry set a groundbreaking precedent by inviting women to campaign and vote in elections for its twelve-member board. Two of them won seats.

And in December, the National Council of Engineers elected a female engineer to its ten-person board, a particularly impressive achievement in an industry that remains dominated by men internationally.

Such professional bodies may have limited constituencies, but in the Saudi context, these are dramatic steps. Elections at a localised, civil society level will help to build a democratic culture on a grander scale. Even on a small scale, female participation begins to break taboos.

Given the heavy restrictions on participation in national or local politics, alternative spaces for representation and debate are politically important, even if these spaces are not formally "political" spaces.

In the most well-known example, years of repression of grassroots political activity in Saudi Arabia has resulted in the increasing politicisation of the mosques as one of the few social spaces for nongovernmental political speech, though not for progress on women's rights.

To a lesser extent, but for similar reasons, Saudi Arabia's business community also functions as a space for political and social discussion. One of the more striking examples of this is the annual Jeddah Economic Forum conference. A conference dedicated to women's rights would have raised some eyebrows, but under the banner of economic development, strong statements are easier to make.

The very presence of women at the Forum – albeit separated from the men by vast mirrored screens – has been highly controversial. In 2004, by allowing ten women to attend, it became the first public event that allowed both genders to participate. It was immediately denounced by the country's grand mufti.

Yet the numbers of female participants are growing every year, aided by the provision of half-price tickets for women. Speakers this year included top Saudi businesswomen and a female head of state, Irish president Mary McAleese, addressing a gender-segregated conference hall.

The women's coffee area and restaurant were buzzing with impressive, outspoken Saudi women. Male American journalists complained they were missing out on all the interesting conversation.

Nonetheless, the coffee areas of the Jeddah Hilton are a world away from the more traditional households in the rural inland areas that make up the majority of the country. It is striking how many educated, professional women express gratitude for their fathers being sufficiently enlightened to allow them an education.

The country may have schools for girls, but education is not a legal right. There is a huge gap between professional women, many of whom have studied abroad, and those who have never been to school and have spent most of their lives in the family house.

Dr Omar Bagour, economics editor of the Saudi Gazette, explains, "These people are the elite, they are not representative. For the women in rural areas, nothing has changed for twenty-five or thirty years.

Does a Bedouin woman inland have rights if she has a conflict with her husband and wants custody of her children? There are still people who would call me an infidel for talking to you with your face uncovered."

The divide between the elite and the others is increasingly evident in the education system. The oil-rich Saudi state funds education for all its citizens to the end of undergraduate studies, and private universities are only just beginning to spring up inside the Kingdom.

One of these is Effat College, the university running the country's first engineering course for women. (Like the majority of workplaces and public social spaces, all education is gender-segregated.)

Run privately, Effat was founded by liberal members of the royal family, who still play a major role in its development. Its curriculum is based on the American model and the school is working with the US-based Duke University to calibrate the quality of its engineering course.

Around the campus, many students wear jeans and T-shirts, and the school sells Effat-branded baseball caps as well as branded headscarfs.

There is a great excitement about Effat's students and staff. Dima Ikhwan, one of the new female engineering students, says "it is wonderful to be part of this change".

The school's impressive facilities include a huge swimming pool and basketball courts decorated with cheerleader-style slogans ("Go go Maha! We are the best!"). Students' gym clothes are designed to fit with local standards of modesty: long spandex leggings are worn under regular gym shorts and swimsuits cover the arms and legs.

By contrast, in the public sector attended by most Saudi students, girls' schools are forbidden to teach physical education and the government recently turned down several applications to build girls' gyms in state-funded institutions. Private gyms and swimming pools for women have opened in the past few years, but this is only an option for those who can afford it.

The barriers of power

As professional women make progress, they will provide role models for other women. But at the moment, elite progress widens the gap between the minority of professional women and the mass of housewives, and there is a risk that the elite women will be perceived as a westernised aberration rather than a vanguard. Perhaps this gap can only be closed with legal changes, and in particular, reform of the education system.

Despite the accession of a king seen as a relative liberal last year, the government continues to empower the religious police, restrict what girls can learn at school, and, more broadly, suppress dissent via censorship and fear.

Although there are liberals within the royal family, conservatives remain strong both in the royal family itself, and within the powerful clerical establishment. In the context of a long-term conflict with Islamist militants, Saudi's ruling family wants to keep as many clerics as possible on its side.

As a result, the government is unlikely to embark on far-reaching education and justice reforms which might anger the clerics. In the absence of such reforms, serious progress will not take place for the majority of Saudi women.

Women in Saudi Arabia
Grand Mufti Pronounces End of Forced Marriages
Saudi Arabia's highest religious authority, the Grand Mufti, has come out against the practice of forcing women to marry against their will. He has said the practice is against the laws of Islam and called for the imprisonment of violators. Kateri Jochum reports

Saudi Arabia
Understanding the Current Political Opening
In recent years international and domestic reform demands have injected new elements of openness into Saudi Arabia's political reality – but they have not altered the authoritarian nature of the political system fundamentally. By Amr Hamzawy

Saudi Municipal Elections
Gradualism of Reform and Traditional Politics
Many commentators have criticized that municipal elections in Saudi Arabia were only a false front to appease calls for more democracy. But in his analysis, Amr Hamzawy argues that historical specificities must be considered

END_OF_DOCUMENT_TOKEN_TO_BE_REPLACED
Social media
and networks
Subscribe to our
newsletter