Islam has been practiced in Bosnia for centuries. Claudia Mende asked Armina Omerika, an expert in Islamic studies, whether the Bosnian Islamic tradition could serve as a model for the integration of Muslims in other European societies 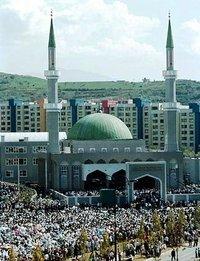 Islam was brought to Bosnia by the Ottomans in the 15th century. Today, Muslims constitute approximately 40 percent of the population

​​ How has Bosnian Islam come to terms with the non-Muslim Bosnian state?

Armina Omerika: This question arose for the first time in 1878, when Bosnia came under Austro-Hungarian rule. One could say that Bosnian Muslims have been living under "foreign rule" ever since. Even then, there were heated debates as to whether Muslims could live in a non-Islamic state. Reformers like Dzemaludin Causevic, the leader of the Bosnian Muslims from 1914 to 1930, were in favour of a modus Vivendi. Naturally, this modus vivendi has changed down through the years.

What issues were particularly controversial?

Omerika: There were fierce debates between Muslim intellectuals and scholars about the secularisation of education, the status of women in society, and about the reform of the Sharia. Since the Austro-Hungarian occupation, the Sharia has been restricted to family and inheritance laws.

One particularly controversial issue was the extent to which women could operate in public. The question of Islamic banks and interest rates was also discussed, as was the way in which the community should come to terms with non-Islamic administrative structures and systems of rule. Many areas of life were secularised bit by bit. However, the impetus to reform the Sharia and to secularise society also came from within the Bosnian Muslim community, not only from outside it.

In other words, nothing can be achieved by applying pressure from the outside alone? 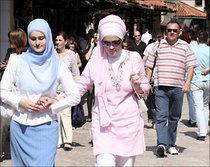 Street scene in Sarajevo: Bosnian Muslims often chose to be more lenient on the rules mandated by their religion than their fellow Muslims in, for instance, the Middle East - both in terms of behavior as well as dress and appearance

​​ Omerika: Nothing much can be achieved without an inner-Islamic debate. In Europe in particular, Islamic communities are very diverse; they frequently disagree with one another and are poorly linked. Dialogue within the Muslim community is, as far as I am concerned, the first prerequisite for solving integration problems in western European societies.

What was the situation during the period of Communist rule?

Omerika: Secularisation in Bosnia peaked during the period of Communist rule. Although the roots of secularisation reach back to Muslim groups and debates in the early twentieth century, the Communists enforced secularisation from above and coupled it with repressive measures against the Islamic community. Secularisation was implemented in a way that is out of the question for contemporary democratic states.

Did this forced secularisation lead to a religious revival?

Omerika: From the mid-1960s onwards, there was a phase of liberalisation and a hint of religious freedom, which led to a religious revival. Semi-legal movements and informal networks that had continued to exist underground, were now able to speak out in the Communist state.

Is there an overlap between Islam and Bosnian nationalism?

Omerika: Ever since the Bosnian war, the Islamic community has supported a form of political nationalism in which ethnic national identity is equated with religious and political identity. Accordingly, alliances are repeatedly formed between the Islamic community and the various Bosniak (i.e., Bosnian Muslim) parties in Bosnia and Herzegovina that have a nationalist outlook. 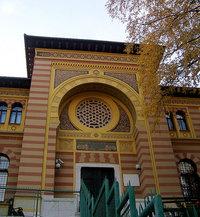 "Ground-breaking concepts for the integration of Islam into a secular state": the Faculty of Islamic Studies in Sarajevo is Europe's only Islamic faculty at a state university

​​ The Islamic communities in Western Europe, on the other hand, are largely made up of Muslims who have migrated there since the 1950s. Since then, Muslim life of an unprecedented diversity has developed. This diversity is not only of an ethnic, but also of a theological nature. There are linguistic, ethnic, and doctrinal barriers between the Muslims of Western Europe and these barriers make it impossible to transfer an institution like Bosnia's Islamic community directly to other regions of Europe.

And what about the theological aspects? Could they act as a model?

Omerika: In Bosnia, the tradition of open Muslim discourse is as old as the Islamic community itself. While there are conservative currents, they are part of an ongoing debate.

A milestone in Bosnian Islam was the re-establishment of the Faculty of Islamic Studies in Sarajevo in 1977. Islamic scholars such as Enes Karic and Fikret Karcic, who work at Europe's only Islamic faculty at a state university, have developed ground-breaking concepts for the integration of Islam into a secular state. The only thing is that they are less well known in the West than, say, Turkish theologians, even though Bosnian and Turkish Islam are actually quite similar in that they both adhere to the Hanafi school of law and the Maturidi school of theology. The Turks are no strangers to secularisation. After all, Turkey has been a secular state since 1923.

How does the Islamic community deal with radical Islamic Salafi traditions?

Omerika: The entire Islamic spectrum is represented in Bosnia today: not only neo-fundamentalist Salafism, but also Shia Islam, Sufism, and groups that are considered heterodox in Islam, such as the Bahai. During the Bosnian war of 1992–1995, up to 1,000 religious warriors from the Islamic world came to Bosnia, bringing with them active, missionary humanitarian organisations. These people imported Salafi traditions into Bosnia. This led to numerous conflicts with the native population. Many of these religious warriors have since left the country.

But there are still Salafis in Bosnia … 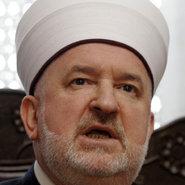 Overstepping the bounds of his role as a religious leader? Mustafa Ceric, Grand Mufti of Bosnia-Herzegovina

​​ Omerika: Many of them had to withdraw in 2001 as a result of pressure from the United States; their organisations were closed and Saudi sources of funding were dried up. The more moderate elements were integrated into the Islamic community. Today, most of the Salafis in Bosnia are native Bosnians, not Muslims that migrated to the country.

While there was no direct confrontation with the Islamic community, its council (Sabor) did pass a resolution that all rites in the mosques had to be conducted in accordance with the Hanafi school of law. In practice, however, this is difficult to monitor. The integration of some Salafis led to criticism from the middle-class liberal Islamic community that these so-called "Wahabis" were being dealt with too leniently.

Is the status of Islam a topical issue in Bosnia?

Omerika: The subject of the mufti Mustafa Ceric in particular is very controversial. Many accuse him of positioning himself as a political player and overstepping the bounds of his role as a religious leader. They also say that he is mixing Islam and politics and poses a threat to the secular character of the state.

In addition, Salafism and its missionary efforts are a regular theme in the Bosnian press. In contrast, hardly anything is said about Christian fundamentalists from the USA acting as missionaries to Muslim, Catholic, and Orthodox youths. The same is true for the close ties between the Serbian Orthodox Church and the state structures. The debate about Islam and its status in society has become a kind of ersatz discourse for debates about religion in general.

Armina Omerika currently holds the post of assistant professor at the Chair of Islamic Studies, University of Erfurt, Germany.

Bosnian Grand Mufti Mustafa Ceric
A Bridge Builder or a Closet Fundamentalist?
Mustafa Ceric, the Grand Mufti of Bosnia-Herzegovina, is a committed proponent of inter-faith dialogue in the spirit of mutual recognition, recently honoured in Germany for his activities. In his home country, however, he is seen as a controversial and conservative religious leader. The German press have also questioned Ceric's suitability for the award. Zoran Arbutina on the case

END_OF_DOCUMENT_TOKEN_TO_BE_REPLACED
Social media
and networks
Subscribe to our
newsletter