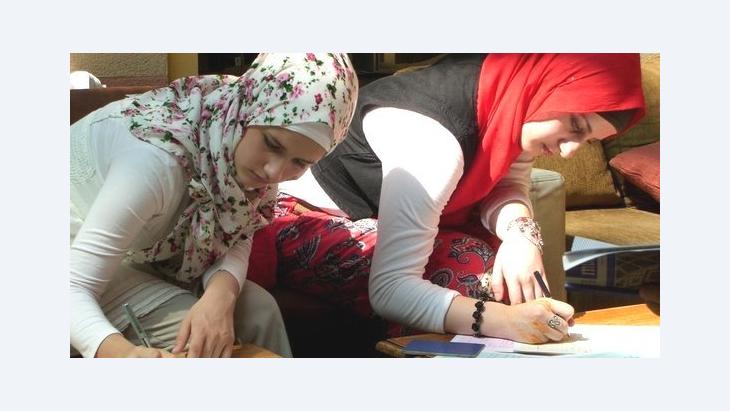 Islam in Bosnia
''We belong to the West, culturally and mentally''

Bosnia is entering a new phase in its history: the post-war era is over; communities and mosques have been rebuilt. But where are Bosnian Muslims heading in these turbulent times? Charlotte Wiedemann spoke to Ahmet Alibašić, lecturer at the Faculty of Islamic Studies in Sarajevo

﻿In what direction are Muslims intellectuals of your generation looking?

Ahmet Alibašić: We're not looking in any particular direction. Because we were cut off from the Muslim world for several decades, during the Yugoslavian Empire and the Communist period, we have learned to be self-reliant. We have developed our own education system and produced a certain Islamic approach to learning. We were forced to rely on ourselves; we are used to independence. And we are very pluralist.

The lecturers of this faculty come from a huge variety of universities: Chicago, Morocco, Egypt, Syria, Saudi Arabia, Belgrade, Zagreb, Turkey, Kosovo, India. You won't find such diversity at any other university in the Muslim world. We have modernists here, traditionalists and reformists.

And where are modernists such as yourself looking?

Alibašić: Bosnian modernists are looking more to Muslim scholars who teach at western universities or who used to teach, for example Fazlur Rahman, Abdolkarim Sorush or Nasr Hamid Abu Zaid.

Sarajevo seems to be a market place for all possible strands of Islam. You have just compiled a bibliography of all the works that have been translated into Bosnian. Who is paying for all this?

Alibašić: Much of it is sponsored. You can get an incredible amount of things for free here. The Sufi brotherhoods canvass for their sheikhs; the Saudis, the Kuwaitis, the liberals, the feminists – they all pay for their own translations. The Iranian embassy distributes Khomeini, the Turks Said Nursi and Fethullah Gülen. And then there's commercially translated literature from small independent publishers.

What makes Bosnia such an attractive market place? This isn't Syria after all, Bosnia doesn't have any strategic significance.

Alibašić: We may not have a strategic importance, but we have a symbolic one. Sarajevo – it's a word that resonates with many people, because of the tragedy and the fighting that took place here. Sarajevo was world headline news for four years. It's important for religious leaders to get that snapshot, one that shows that they have achieved something in Sarajevo.

Is this more of a danger, or is it an opportunity?

Alibašić: I see it as an opportunity, as a challenge. I'm not the kind of person to panic. Of course being associated like this with the entire Muslim world also has its dangers, but it's better than being isolated and forgotten. Up to now, we've coped very well. None of the international movements have really had any success here. Quite simply because this is not an empty space. Anyone coming here encounters a Muslim hierarchy that cannot be simply denounced as corruptible or as part of the government. 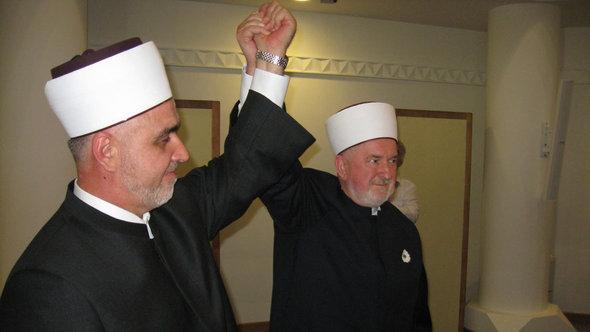 Not a change in direction, but a turning point: Muslim dignitaries in Bosnia elected Hussein Kavazovic as the successor to former Grand Mufti Mustafa Ceric, who held office for 19 years

​​It is a community with tradition and with elections. Sooner or later all these movements, who come here from elsewhere, must accept that the mainstream will remain with the Islamic community. It could take four or five years, but they'll realise it eventually.

Not everyone takes such a relaxed view of the situation. There are radical groups that brand the community as "faithless" because it calls on people to take part in secular state elections.

Alibašić: Yes, but in this respect we've put the worst behind us. During the war, and in the period thereafter, Bosnian Islam faced substantial danger. The Salafists were very ambitious at the time. But as I said, this critical phase is now behind us.

The community controls the 1,400 imams in Bosnia-Herzegovina, and the 900 Muslim teachers of religion paid by the state have to be validated by the community. Does this mean it is upholding an absolute religious monopoly?

Alibašić: The Salafists remain a challenge, but we are also concerned about the Sufis and the Shiites. We have problems with the Sufis if they only listen to their sheikhs and do not accept the authority of the community. An imam is not allowed to turn a mosque into private quarters for his brotherhood. This is why several grassroots congregations have broken away.

The mosque in Sarajevo, where the Grand Mufti has his office, was dominated for a long time by a Sufi group, for years Ceric wasn't able to enter the mosque! The Mufti of Sarajevo and others were even beaten up there.

Beaten up? By Sufis?

Alibašić: Yes indeed. There are other mosques withdrawing from the control of the community for other reasons. In western Bosnia, a congregation is refusing to accept the removal of an old imam. For several years now, worshippers there have refused to recognise the imam who was appointed to replace him. We can't call in the police to throw out the old imam; all we can do is wait until he falls ill, or dies.

Independence and diversity: Muslims make up 40 percent of the 3.8 million inhabitants of Bosnia and Herzegovina. Most adhere to a moderate form of Islam that the Ottoman Empire brought to the Balkans in the 15th century

​​The community is not a company like Coca Cola; some people expect it to solve internal problems in the same tough manner as a business corporation. But we prefer to wait for time to resolve the problem. The community must also live with those who don't like it, it can't throw anyone out.

What is your faculty's attitude to Wahabism?

Alibašić: Many people don't understand that each and every dean at this faculty, even a modernist, is obliged to recognise a diploma from Saudi Arabia if it fulfils the formal criteria. Just as it did in Communist times, the faculty is still expected to scrutinise qualifications from foreign institutions. So if a Wahabi Muslim comes to us with a diploma that corresponds to those awarded by our faculty in terms of subjects and the scope of a course of study, then he has the right to work in Bosnia. That is Islamic pluralism.

Of course, the grassroots community can then say: We don't want to have this person as our imam. But we can't impose any general ban ourselves.

Iran also appears to be present in Bosnia. What's so appealing about Iran here?

Alibašić: That's primarily because of Shi'ism. It's very emotive and full of stories of victims; the Bosnians have a weakness for that. Because we've suffered a great deal ourselves, and we are attuned to injustice. For a while, several intellectuals adopted an Iranian-influenced position on the Syria conflict; now they're trying to back down from that. Generally, I see more of a religious than a political influence.

Politically, Iran is much too far away. We belong to the West, culturally and mentally. This is also evident from the following statistic: of the hundreds of thousands of Bosnian refugees abroad, very few remained in Malaysia, Turkey or other Muslim nations. They eventually preferred to go to America, Australia or Germany. Even the Bosnian Salafists would rather operate from Vienna than Saudi Arabia.

41-year-old Dr. Ahmet Alibašić, Assistant Professor, studied political science in Sarajevo, Islamic studies in Kuala Lumpur and Arabic in Riyadh. He translated the work of Catholic Islam scholar John Esposito into Bosnian, founded the independent "Center for Advanced Studies" and is co-publisher of the "Journal of Muslims in Europe". Progressive Bosnians would like to see him in the post of Grand Mufti at some point in the future, but Alibašić maintains a distance from the establishment.

Home
Print
Newsletter
More on this topic
''Euro-Islam'': Too Diverse to DomesticateFaculty of Islamic Studies in Sarajevo: Seat of Knowledge and Mediator between the CulturesIslam in Bosnia: Ground-Breaking Concepts of Secularization
Related Topics
Dialogue of Cultures | Intercultural Dialogue, European Islam, Islam and the West, Islam in Europe, Muslims in the West, Mysticism | Sufism, Wahhabism, Women in the Islamic world, Salafis | Salafism, Shia Islam | Shiite Muslims
All Topics

Research project "The Global Qur'an", brainchild of Professor of Islamic Studies Johanna Pink and sponsored by the European Research Council, analyses the history and ... END_OF_DOCUMENT_TOKEN_TO_BE_REPLACED

A wedding extravaganza of bright colours, flowers, feasting and dancing, yet the bride, Nefie Eminkova, who comes from Bulgaria's Pomak – Muslim – minority, can see none of it. ... END_OF_DOCUMENT_TOKEN_TO_BE_REPLACED

As the Western world emerges from a holiday season made less festive by COVID-19, millions of children in Afghanistan are starting 2022 facing the prospect of famine, illness, and ... END_OF_DOCUMENT_TOKEN_TO_BE_REPLACED

Every year in December, the team at Qantara.de takes a look back at the articles that proved most popular with our readers. This year is no different. Here is a run-down of the ... END_OF_DOCUMENT_TOKEN_TO_BE_REPLACED

Jesus – Issa in Arabic – doesn’t merely enjoy the highest place among the prophets in the Koran. He is also revered in Islam’s mystical tradition for his message of love and mercy ... END_OF_DOCUMENT_TOKEN_TO_BE_REPLACED

The military in Sudan has never waged war against a neighbour, but it has already staged 17 coups. Tens of thousands of people are risking their lives to oust the military by ... END_OF_DOCUMENT_TOKEN_TO_BE_REPLACED
Author:
Charlotte Wiedemann
Date:
Mail:
Send via mail

END_OF_DOCUMENT_TOKEN_TO_BE_REPLACED
Social media
and networks
Subscribe to our
newsletter