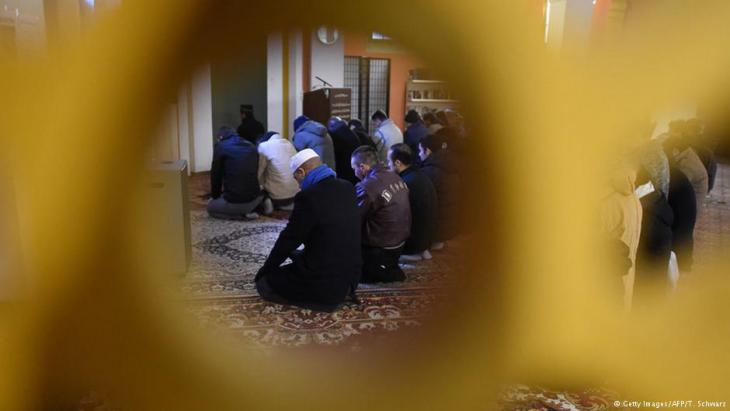 Islam in Germany
A poor second

Germany is a secular country, but the German legal framework approves of institutionalised religions in a biased way. The religions must organise themselves according to state standards and those standards are tailored toward the structures of the Christian religion. A commentary by Alexander Goerlach

Religion in Germany is not a private affair. Government at all levels recognises religious communities as public institutions and encourages participation in them — Germans who register with the state as Roman Catholics, Protestants or Jews pay a ″religion tax″, which the government then sends to their respective institution. Religious groups are also allowed to give faith-based instruction in public schools: it′s not uncommon for a small-town pastor, priest or lay person to have a spot on the local senior school faculty.

To enjoy this privileged status, religious communities must have a defined set of beliefs, their members must be recorded and they must have historical and social significance. The Catholic, Protestant and Jewish religious communities are organised as public institutions; in the state of Berlin, Jehovah′s Witnesses and the Mormon Church are as well.

It might seem as if Islam, with 4.3 million adherents in Germany, would have qualified easily. But so far, the German government has resisted including it.

The reason is both simple and complex: Muslim communities are separated along ethnic lines as well as along denominational lines among Sunnis, Shias and Alawites. Often there is little unity among these groups, hence they fail the most important state criterion: a unified religious body with shared goals and doctrines. 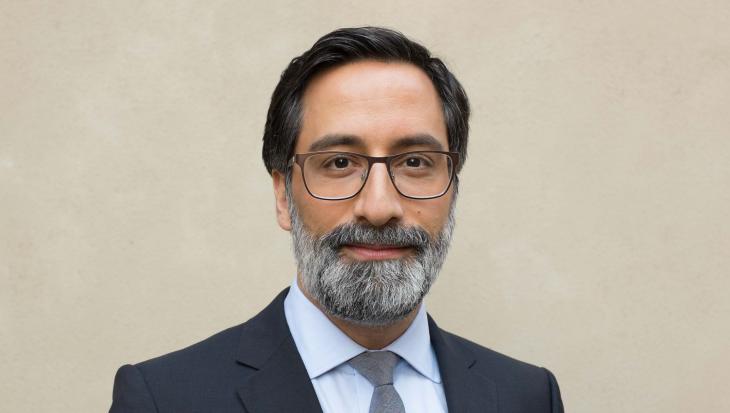 Alexander Goerlach is a visiting academic at Harvard University where he lectures in the field of politics and religion at the Center for European Studies. The linguist and Doctor of Theology has also conducted research at institutions such as Cairo′s Al-Azhar University and the University of Ankara′s Faculty of Theology. He is founder and publisher of www.saveliberaldemocracy.com, writes for the New York Times and is a senior advisor to the Berggruen Institute, a think-tank based in Los Angeles

These requirements for a religion to get a privileged status in Germany highlight the anachronistic state of the secular federal republic in its approach to faith. The idea that the state can co-operate with religious groups in the same way it co-operates with, say, labour unions presumes a certain unity and hierarchy on the part of those groups. But Islam doesn′t work that way. It simply doesn′t fit within criteria written for the structured Christian churches that have shaped Europe, with bishops and baptismal registers.

And Germany is more Christian than outsiders might believe. Christian holidays like Easter, Ascension, Reformation Day and Corpus Christi are official holidays, but the important holy days of Judaism and Islam are not. In cities and villages across Germany, church bells ring and Christian church representatives broadcast their programs on state radio and television. The title of the law says it all: the Staatskirchenrecht, or the State and Church Law.

For quite some time, there have been demands that the law be renamed the Religionsrecht (Religion Law) and for it to include a wider diversity of religions. Though nothing much has changed on the national level, there has been progress in the states, where most of the country′s religious laws are promulgated. Bavaria, a conservative Catholic state that polls very high in measurements of xenophobia and anti-refugee sentiment, nevertheless has been running an Islamic-education pilot programme in schools; it is also home to Germany′s oldest mosques. Perhaps the Bavarians, precisely because they protect their own religious and cultural traditions so ferociously, are also the most willing to recognise and support the traditions of others.

But it′s not only in Bavaria that reform is moving forward. In the Protestant-dominated north, Christian Wulff, a premier of Lower Saxony, set up training courses for future imams and Islamic religious teachers at the universities of Munster and Osnabruck. Later, when he was president of Germany, Mr. Wulff said, ″Islam belongs to Germany.″

These days, mosques in Germany are as diverse as the Muslim communities they represent. There are those that reflect the architectural tradition of classical Ottoman mosque design, but Germany has in the meantime also become home to several modern and innovative mosques such as those in Penzberg or the Cologne district of Ehrenfeld. Every year on October 3, the mosques operate an open-door policy for interested visitors. But in actual fact, it's possible to visit a mosque at any time. 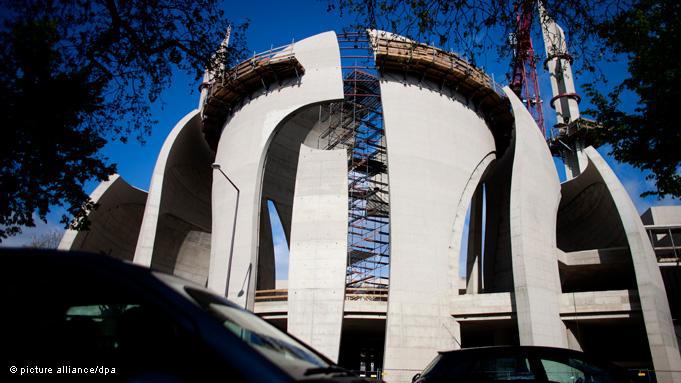 The construction of a large mosque in the Cologne district of Ehrenfeld triggered years of political and ideological debate on a national level. Public perception of the DITIB's central mosque has in the meantime undergone a transformation. 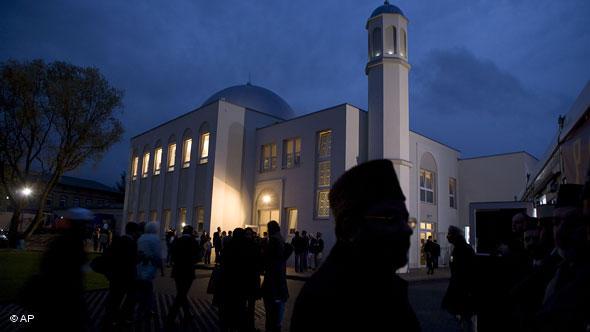 The first new mosque to be built in the former East Germany was opened in October 2008. The Ahmadiyya Mosque in the Berlin district of Pankow has prayer halls for men and women, each with a capacity for 150 worshippers. 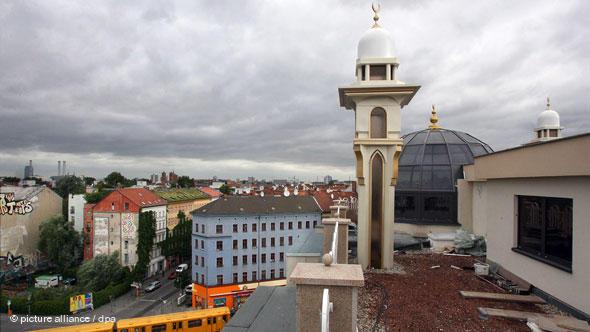 The Omar Mosque, also known as the Khattab Mosque in the Berlin district of Kreuzberg was built in 2008 by the ''Islamic Association for Charitable Projects''. It has four minarets. The prayer hall with its two-storey gallery can hold around 1,000 worship 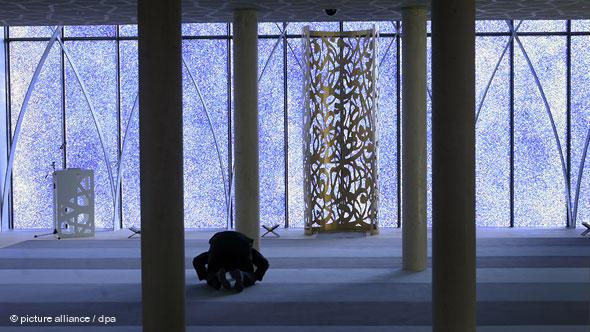 The prayer hall of the mosque in the upper Bavarian town of Penzberg, which was built in 2006, is bathed in a blue light from the shimmering façade made from thousands of glass fragments. 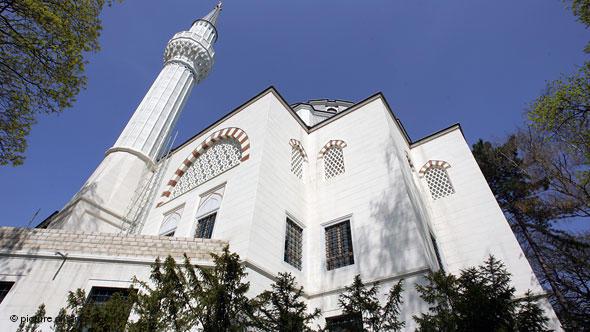 The Sehitlik Mosque in the Berlin district of Neukölln is located on the site of the old Turkish cemetery, which gives the mosque its name – ''Sehitlik'' means ''martyrs' resting place''. Turkish soldiers who came to Germany in 1914 were buried here. 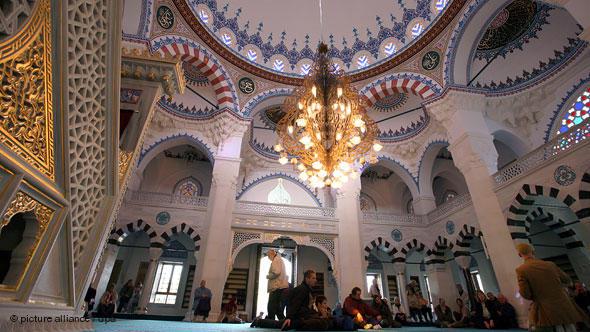 Two external flights of stairs lead into the magnificent main prayer hall at the Sehitlik Mosque on the Columbiadamm in Neukölln. It can accommodate around 1,000 worshippers. 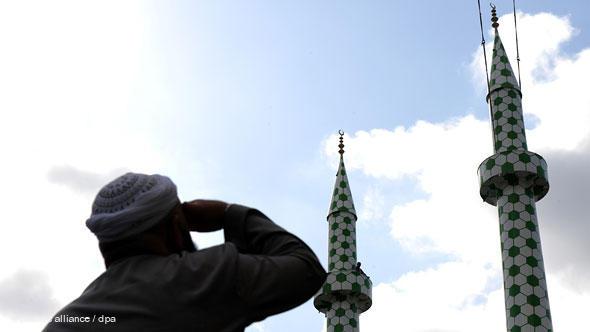 In a spectacular project, artist Boran Burchhardt redesigned both the minarets of the Centrum Mosque in the Hamburg district of St. Georg in September 2009. 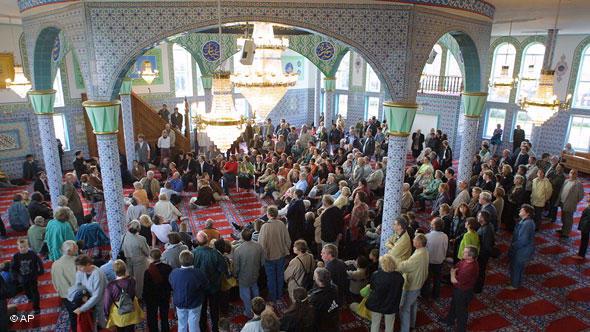 When it was built in 1973, the Fatih Mosque in Bremen was the city-state's first Muslim house of worship. The prayer hall interior was painted by two Chinese and four Turkish artists. 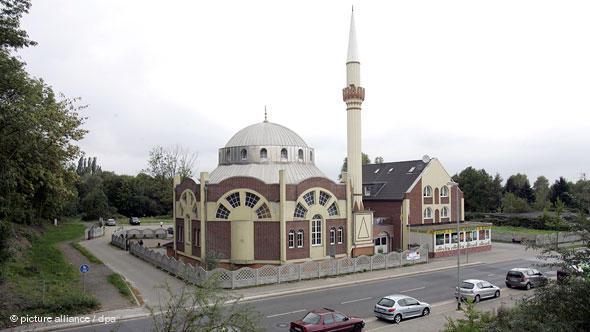 In 1995, arsonists attacked the provisional house of prayer serving Turkish Muslims in the Essen district of Katernberg. The campaign for the construction of a new mosque was supported by many committed members of the public. 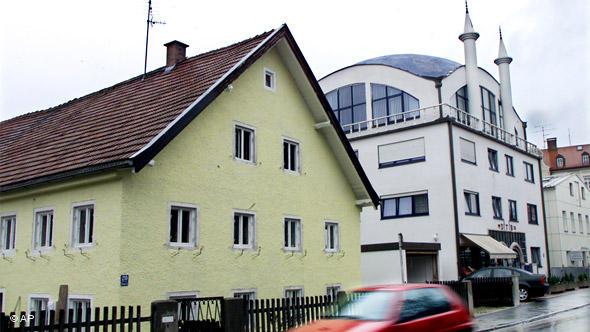 In 1999, a mosque was built for the growing Turkish population alongside a former farmhouse in the Munich suburb of Pasing. 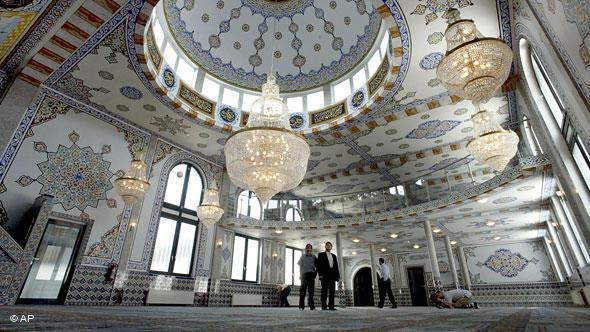 The Fatih Mosque in Wülfrath near Dusseldorf was inaugurated in 2003 by the President of the Bundestag at the time, Wolfgang Thierse. 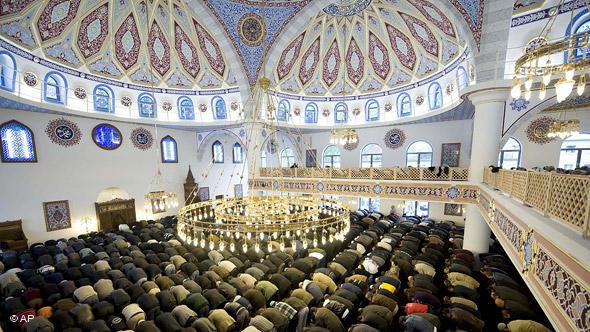 The Merkez Mosque in Duisburg, which was inaugurated in 2008, is one of the largest mosques in Germany. It has the capacity to accommodate 1,200 worshippers beneath its resplendent cupola. 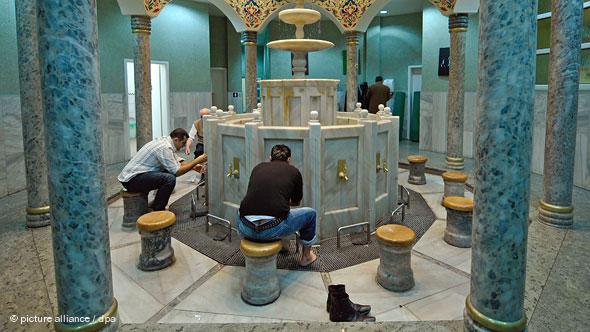 Washing is of central importance to the Muslim prayer ritual. The Yavuz Sultan Selim Mosque in Mannheim has an especially beautiful room for this purpose. The prayer house is an architectural synthesis of old and new.

Though Mr. Wulff served just two years as president before resigning in 2012 over allegations of corruption (since dropped), his actions on behalf of Islam — and that quotation in particular — set off a debate that continues across the country.

Critics of Islamic religious education in the schools, including many Muslims themselves, say that there is no group in the country that can speak for all Muslims. And indeed, it is estimated that the Central Council of Muslims and the Islamic Council for the Federal Republic of Germany, the two groups that have the best claims to speak for Islam in Germany, represent no more than 20 percent of German Muslims.

Germany is a secular country, but the German legal framework approves of institutionalised religions in a biased way. The religions must organise themselves according to state standards and those standards are tailored toward the structures of the Christian religion.

The result is a delegitimisation of the state′s relationship to religious groups in the eyes of many non-Christians, particularly Muslims — a dangerous prospect at a time when rapid integration is essential to maintain social peace. In the context of a growing Muslim community and a rising number of citizens affiliated with no religion at all, Germany may not be able to maintain an order that arose many generations ago.

In her latest novel, Catalan-Moroccan writer Najat El Hachmi tells the story of a young migrant woman struggling to balance her desire for freedom and the demands of tradition and ... END_OF_DOCUMENT_TOKEN_TO_BE_REPLACED

Benjamin Idriz, imam of the mosque in Penzberg near Munich, is one of the most prominent representatives of Islam in Germany. He sees his role as building bridges to mainstream ... END_OF_DOCUMENT_TOKEN_TO_BE_REPLACED

Turkish author and journalist Mustafa Akyol is one of the foremost pioneers of an Islam reconciled with modernity. Musa Bagrac spoke with Akyol for Qantara.de about his new book " ... END_OF_DOCUMENT_TOKEN_TO_BE_REPLACED

In view of the catastrophic supply situation in Afghanistan, UN authorities are sounding the alarm. Inflation and growing poverty are exacerbating the situation. The Taliban ... END_OF_DOCUMENT_TOKEN_TO_BE_REPLACED

For Western listeners, the sound of the sitar is perhaps the most cliched musical symbol of India. Sitar player Hindol Deb, who lives in Cologne, Germany, has just released his ... END_OF_DOCUMENT_TOKEN_TO_BE_REPLACED

People these days are seeking orientation in a rapidly changing world. In response, all religions – each unique in their customs and traditions – need to pull together, says Chief ... END_OF_DOCUMENT_TOKEN_TO_BE_REPLACED
Author:
Alexander Goerlach
Date:
Mail:
Send via mail

END_OF_DOCUMENT_TOKEN_TO_BE_REPLACED
Social media
and networks
Subscribe to our
newsletter