Islam in Granada
The Mellow Voice of the Muezzin

Seven years ago, the Great Mosque of Granada was opened, more than 500 years after the Muslim Moors were expelled by the Catholic 'Reconquista'. But despite the city's multicultural character, many people there feel uncomfortable hearing the Muslim call to prayer. Troy Nahumko paid a visit 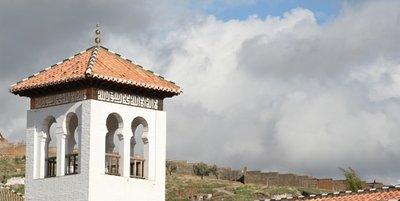 "Somewhat of a miracle": Granada has a Muslim heritage of more than 800 years, yet the building of the mosque and the muezzin's call to prayer are regarded with unease by some

​​ It's midday. Not the 12 o'clock sandwich break at your desk that comes to mind nor the 2pm midday pause button that slows this entire country to a digestive halt for its civilized daily lunch break, but simply a natural breath in the equator of the long day. A young man climbs a spiral set of stairs and takes in the privileged view that spreads out in the valley below him.

He pauses, takes a deep breath and then something happens. Something that hasn't been heard on the skirts of these sometimes snowy mountains in more than 500 years, yet something that once rang out 5 times a day across most of this country for almost 800 years.

The Islamic call to prayer.

The place is Granada and the privileged view is the Alhambra, nestled in the flamenco dress skirts of the Sierra Nevada. A city so famous that it was already called the bride of Al-Andalus back in the 14th century when the great traveller Ibn Battutah described meeting residents from far off mystical silk road stops like Samarkand, Tabriz, Konya and India living in the very same neighbourhood where the call is once again heard.

The traveller from Tangier therefore probably wouldn't be surprised today as up to 8000 visitors a day from all over the world marvel at Spain's most visited monument just across the valley: the Nazrid palace, which was built next to the immense and seemingly impregnable fortress that he saw just a few years after he had moved on to continue his travels.

A meeting place for the globalised community

Yet look beyond the busloads of tourists on their guided tours of the superlatively friendly red fort that stands guard over the city, over the throngs of people vying for their Facebook-friendly Alhambra picture, and you can see that the city is still a place where cultures and people from all over the world meet and, more importantly, interact. 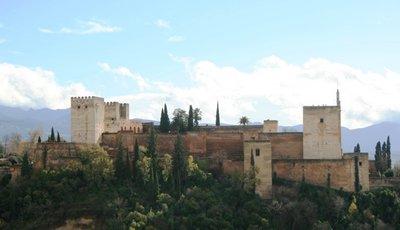 The Alhambra is a palace and fortress complex constructed during the mid-14th century by the Moorish rulers of the Emirate of Granada in Al-Andalus. It is a testament to Moorish culture in Spain and the skills of Muslim, Jewish and Christian artisans, craftsmen, and builders of that era

​​Meander through the Albaycín, the cardamom-flavoured neighbourhood originally created to house Muslim refugees fleeing the advances of the Christian north and you will find homey Moroccan restaurants, multinational guesthouses and multilingual signs set to a soundtrack of buskers playing Jimi Hendrix-infused flamenco, all of which is punctuated 5 times a day at prayer time.

"I've been here for more than 25 years", the owner of Manchachica, a restaurant featuring delicious cuisine from his native Chefchaouen, proudly states. In between serving beers, laying out tapas and dealing with neighbourhood to-go orders he easily slips between Arabic and Spanish. "I've been here longer than I was in Morocco, this is my home now." Judging by the first name basis that most customers seem to go by, he's not exaggerating.

The young man atop the stairs in the minaret himself is part of this mix, an Asian muezzin calling the resident faithful from Morocco, Algeria and beyond. What is different about this call is that, unlike the pumped up super amplification that roars from the slender minarets of Cairo, the crackly tape recorded versions heard across Iran or the 60+ competing voices that boom across the biblical valley in Sana'a, here it's just a man, his voice and the wind. A sound so light and airy that it is drowned out just steps away in the popular mirador overlooking the Alhambra.

Why the unplugged version in what is probably Europe's noisiest country? Well, the mosque has powerful neighbours and anything that might eclipse their clanging bells, literally or otherwise, is viewed with extreme suspicion.

Spurred by Islamophobic sermoning, complaints filed against this mosque and others around the country range from the surreal to the flat out unbelievable. From the supposed parking problems that it might cause in this largely pedestrian area to possible 'conglomerations' in public areas in a country that nearly lives in the street, the underlying message is clear. Integrate, but only if you're quiet about it. 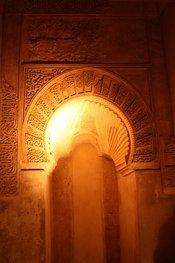 ​​ The fact that the mosque itself was built is somewhat of a miracle. Across the country, permits to build mosques are routinely rejected by town councils and a small but vocal opposition, driving Muslims underground to pray in private homes and even garages. The rejection and ensuing secrecy creates the perfect environment for disgruntlement and anger, the antithesis of the wished-for integration.

This refusal and intolerance isn't limited to migrants though; Spanish-born Muslims also meet it at every turn. A few years ago the Islamic Junta of Spain asked permission to pray in the ancient mosque of Cordoba, now property of the Vatican. Taking their cue from Pope Benedict XVI after his much publicized prayer alongside the Gran Mufti of Turkey in Istanbul's Blue Mosque, local Muslims hoped to share the once-pagan temple with the Catholics who pray in the church that was built in the centre of the mosque back in the 16th century.

The request was summarily rejected and now security guards hover near the Mihrab, ready to stop any visitor who chooses to pray in the wrong way, to the wrong God, in the wrong area. Curiously enough, this flat out denial has been bent a few times, perhaps most infamously when Francisco Franco, Spain's theocratic dictator, allowed a then little known Saddam Hussein to pray in front of the Mihrab back in 1974.

There is always an alternative to conflict and direct confrontation, writes Troy Nahumko. Pictured: stone calligraphy in the Alhambra palace

​​This overzealous protectionism seems counterproductive in a country where secular voices demanding a clearer and more well-defined separation between Church and State grow stronger every day. Young people with no living memory of the Catholic dictatorship that ruled the country for more than 40 years are asking why Catholic symbols are ubiquitously present in public spaces in an EU country whose constitution states that it is aconfessional.

This second-class treatment that Muslims face is not unique to Granada, nor even to Spain. The 2009 vote in Switzerland to ban minarets, or recent election successes of anti-Islamic populists like Geert Wilders in the Netherlands remind us that Islamophobia is rife across the so-called 'old continent'. Racial profiling at airports and extra security checks for citizens from certain Islamic countries only cement the dangerous notion held by some of a modern crusade.

Part of the solution to this suspicion might lie in the shadow of the minaret overlooking the Alhambra back in Granada. Latin American immigrants who have converted to Islam easily rub shoulders with young Americans studying Spanish to the sounds of flamenco that have also long echoed in these narrow winding streets of its Medieval Moorish past, while natives of Granada buy their bread from Eastern Europeans working in Algerian bakeries.

The people who live here don't seem to care whether the Pope grants Muslims in Cordoba the right to share a holy place equally, or if a judge in Madrid thinks it's against public interest for the call to prayer to be amplified over their Albaycín. And if they do, it doesn't seem to affect the cohesive atmosphere that is sometimes lacking in other neighbourhoods-turned-museums around the world.

There is a popular saying in Spain, "Las cosas de palacio van despacio" (government wheels turn slowly), and by the time those higher up realize that in the Albaycín there is a unique opportunity to learn from the past and skip other counties' mistakes, it may be too late. But until then, climb the zigzagging streets that lead up from the Darro river and search for the calm ring of the voice reminding all of us that there are other ways around confrontation.

Granada, Spain
The Moors Are in Fashion, Arabs Aren't
Tourists seek out Arabian flair in Granada's Albayzín district, yet local residents remain sceptical of the Arabs that live there today. Merten Worthmann talked to people of the district in which a new mosque has recently been built.

Each in His Own House – and God in Them All
Christians and Muslims Locked in Dispute over Prayers in Córdoba
The Mezquita in Córdoba, Spain, was originally built by Muslim moors but has been used as a church ever since the reconquest in the 12th century. Now a Spanish Muslim has suggested an "ecumenical transformation" of the building. Leo Wieland reports

Spain
Islam Returns to Andalusia
In July 2003, 511 years after the Christian conquest of Spain was completed, a splendid new mosque has opened its doors, close to the Alhambra in Granada. Built with Arab money, the mosque is intended "to serve the coordination of all European Muslims". Rainer Wandler reports

A Mosque for Seville
"You Have to Accept That Spain Isn't an Islamic Country"
The construction of Europe's biggest mosque is thrown into limbo after fresh elections in Seville city council as word got out that the city administration had approved the plans. Martin Schneider reports about the controversy

END_OF_DOCUMENT_TOKEN_TO_BE_REPLACED
Social media
and networks
Subscribe to our
newsletter