In Indonesia, Islamic NGOs are the backbone of tolerant civil society. While Islamic women's organisations are demonstrating how the Sharia can be used to combat misogynist policies, Islamist parties are losing ground. By Alfred Stepan and Jeremy Menchik

In Indonesia, Islamic NGOs have become the backbone of the country's tolerant civil society. While Islamic women's organisations are demonstrating how the Sharia can be used effectively to combat misogynist policies, Islamist parties are losing ground in elections. Alfred Stepan and Jeremy Menchik report

The Obama seal of approval: since Suharto was toppled, Indonesia has developed into a model democracy in South-East Asia

​​ The visit of "Barry Obama" – the Indonesian nickname for the former Indonesian resident and current US president – to Jakarta is intended, as much as anything, to celebrate the achievements of the largest Muslim-majority country in the world. In the 12 years since its transition to democracy, Indonesia has regularly held local and national elections, developed a functioning free market and strengthened its culture of tolerance towards the country's Christian, Hindu, Buddhist and Chinese minorities.

Of the ten members of the Association of Southeast Asian Nations, only Indonesia has a "free" rating from Freedom House. The largely Catholic Philippines, Buddhist Thailand and Confucian Singapore lag behind Indonesia in providing basic democratic rights to their peoples.

American policymakers have therefore looked to Indonesia as a model for the rest of the Muslim world. But what lessons can be learned from Indonesian democracy?

Backbone of a tolerant society

The most important lesson is that Islamic organisations can provide the backbone of a tolerant civil society. Muhammadiyah and Nahdlatul Ulama (NU), mass Islamic institutions with more than 30 million and 40 million members respectively, operate more than 10,000 schools and hundreds of hospitals, run youth organisations and support women's movements. Both have connections to political parties, most of which have consistently spoken out in support of democracy and against an Islamic state. 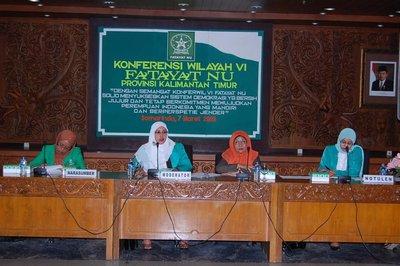 At the gender conference organised by the Indonesian women's organisation Fatayat, Indonesian women showed that the Sharia can be used as a tool for combating misogynist policies

​​ Indeed, Syafi'i Ma'arif, the former chair of Muhammadiyah, has made pluralist arguments, grounded in the Koran, against blind obedience to Islamic classical jurisprudence. Abdurrahman Wahid, the former chair of NU, for decades advocated respect for religious pluralism, and was pivotal in mobilising democratic opposition to the authoritarian leader Suharto.

A third Islamic intellectual, Nurcholish Madjid, called for the "de-sacralising" of politics in the 1970s, advocated genuine multi-party democracy in the 1990s and personally urged Suharto to step down in 1998.

Information campaigns for women excluded from US aid

Indonesia also demonstrates how Islam can provide support for women's rights. Among the activist community in Jakarta, the most successful organisations are those that draw support from the women's wings of Muhammadiyah and NU: Muslimat, Fatayat and Aisyiyah. 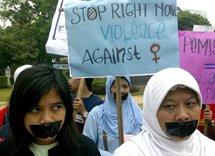 ​​ The former head of Fatayat, Maria Ulfah Anshor, has made sophisticated arguments grounded in fiqh for women's access to reproductive rights. And, thanks to a partnership between the state and Islamic scholars stretching back 40 years, Indonesia has one of the most successful family-planning programmes in the developing world.

Ironically, the US has done as much to block the efforts of Indonesia's women's rights activists as it has to support them.

Former President George W. Bush's restrictions on funding for health programs that promoted the use of condoms or other forms of contraception meant that Islamic organisations receiving any funding from the US Agency for International Development were unable to publish material promoting safe sex and family planning.

Scharia as a tool for women's rights

This could be, and often was, highly counter-productive. In one particularly absurd case, a group of Muslim feminists who wrote a book promoting women's rights based on Koranic exegesis had to publish their work in secret, because it included arguments for women's reproductive rights and a small percentage of the group's funding came from a foundation that had received money from USAID.

With 30 million members, the Islamic NGO Nahdlatul Ulama is one of the largest Islamic mass institutions in Indonesia and in the world

​​ The fact that Islamic organisations have benefited women may also help explain Indonesian women's political success. The parliament is 18 percent female (a slightly higher percentage than in the US Congress), and a woman, Megawati Sukarnoputri, was the country's fourth president. Leading organisations like Umar, Fatayat and Muslimat provide a corrective to the widespread view that the Sharia necessarily impedes women.

Indeed, Indonesian women have shown how the Sharia can provide a tool for combating misogynist policies. For example, the head of Islamic affairs in the Ministry of Religion, Nasaruddin Umar, is a self-described Islamic feminist who has published sophisticated critiques of gender bias in Koranic exegesis.

Religion permeates almost every aspect of life in Indonesia, including politics. But political parties advocating implementation of the Sharia have lost ground in successive elections from 1955 to 2009. 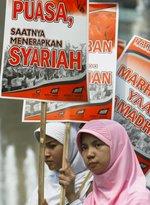 ​​The parties that still support the Sharia have largely disappeared or changed their platform. Rather than taking over the state, Islamist parties have been forced by the electorate to alter their policies to account for Indonesian pluralism.

Perhaps the best way to help Muslims is not to attempt to transplant institutions from Indonesia to the Middle East, or to give aid to "American-approved" moderates, but simply to listen more closely to the voices of Indonesian Islam.

But that is difficult to do. Almost none of the writings of the intellectuals who have been crucial to democratisation and women's rights in Indonesia – for example, Abdurrahman Wahid, Nurcholish Madjid, Syafi'i Ma'arif, Siti Musdah Mulia and Maria Ansor Ulfah – has been translated into English. Perhaps more unfortunately, none has been translated into Arabic.

Alfred Stepan, a professor of political science at Columbia University and the director of its Centre for the Study of Democracy, Toleration, and Religion, is a co-author with Juan J. Linz and Yogendra Yadav of Crafting State Nations: India and Other Multinational Democracies. Jeremy Menchik, a Ph.D. candidate at the University of Wisconsin-Madison, has spent the past two years studying Islam and politics in Indonesia.

Qantara.de
Press Freedom in Indonesia
Conservative Victory over Press Freedom
The former editor-in-chief of Indonesian Playboy magazine has begun a two-year prison sentence for "public indecency". And this in a country with the some of the most liberal media laws in Asia – since the toppling of Suharto. By Anett Keller

END_OF_DOCUMENT_TOKEN_TO_BE_REPLACED
Social media
and networks
Subscribe to our
newsletter