Peaceful Prospects for the Moors

Twenty-five years of civil war in Sri Lanka have also had an effect on the country's Islamic community: Muslims feel they have been victims of a conflict in which they had no part. With the end of the civil war, however, things are set to get back to normal again. Irfan Husain reports from Colombo 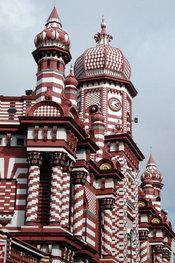 The Jami Ul Alfar Mosque in Colombo, the country's capital. Islam settled in Sri Lanka as early as the 8th century

​​Although the origins of the Arab presence in Sri Lanka is shrouded in myth, it is at least two thousand years old, thus pre-dating Islam by centuries. Ancient travellers mention Arab and Persian trading colonies along the coast, and after Islam was first revealed in the 7th century, the new faith was soon introduced to the island. Today, the descendants of this original community constitute 95% of the Muslim community, and are known as Moors.

The remaining 5% are divided between the 'Malays', brought in by the Dutch colonists from Java in the 17th century, and the Muslims who came from Southern India when the British ruled the island. Together, the Muslims make up just over 8% of the total population of 20 million.

Although they were largely confined to the coast in earlier days, the Portuguese pushed many of them inland. Today, they are represented in virtually every occupation and profession, and dominate the gemstone industry.

Integrated into the national iconography: the green band on Sri Lanka's flag represents Islam and the Moorish ethnic group

​​The Muslims in Sri Lanka represent a remarkably successful example of integration. Speaking the local languages of Sinhalese and Tamil, they are often distinguishable only by their dietary habits, for instance eating meat when few Buddhists do so.

Along the coast, the men can be spotted by their wispy beards and skull-caps, while the women often wear the shalwar-kameez favoured by their sisters in India and Pakistan. Their mosques dot the small towns of the coast. Over time, they have lost the use of Arabic, but they remain socially conservative, and few of them drink alcohol, except among the more modern and urban circles of Colombo and Galle.

A savage act of ethnic cleansing

Despite the fact that the Muslims constitute the third biggest community in Sri Lanka after the Sinhalese and the Tamils, they remained politically inactive for decades after the island gained its independence from the British in 1948. It was only after the rebel Tamil forces of the LTTE turned against them in the North East in 1990 that they became conscious of their rights as a separate community. 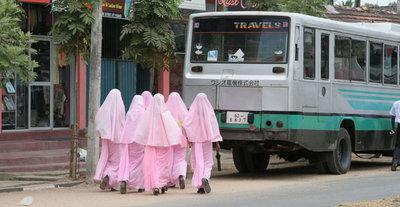 Students from a government Muslim teacher training college. Despite the fact that the Muslims constitute the third biggest community in Sri Lanka, they largely remained politically inactive (photo: Dennis McGilvray)

​​Around 100,000 Muslims were evicted from their shops, homes and farms in a savage act of ethnic cleansing that sent thousands of families into refugee camps, where many of them live to this day.

The tension arose because the Prabhakran, the ruthless leader of the Tamil Tigers, judged that the Muslims living in the area he controlled did not sufficiently support the cause of Tamil separatism. The Muslims understandably wished to continue living under a secular central government under which they had equal rights. As a result, they were forced out of the area in which their forefathers had lived peacefully for centuries.

The end of the civil war

Presently, an uneasy truce prevails among the coastal Tamils and the Muslims. Due to this hardening of attitudes, young Muslims have been organizing themselves into groups, even through there have been no reports of arms being acquired by them. Most Muslims are hoping that with the end of the civil war in May of this year, they might be able to return to their homes in the Tamil-dominated areas. 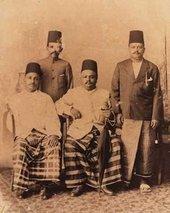 Group of Moor gentlemen, early 20th century photograph. Moors today use Tamil as their primary language with influence from Arabic

​​In historic terms, the tensions that occurred during the civil war were an aberration, rather than the norm. Apart from the Portuguese in the 16th century, who persecuted Sri Lanka's Muslims, forcing them to migrate to the Central Highlands and to the east coast, there were hardly any tension between the 'Moors' and Sri Lanka's rulers, colonial (Dutch and British) or not.

The country's Muslims were generally seen as shrewd traders, able administrators and invaluable interpreters. The majority Sinhalese saw them as no threat to their power, and the Tamils lived in peace with them for centuries.

Today, although there is little overt hostility towards the Muslims, the community feels under threat. As Sinhalese nationalism becomes more pronounced in a country that has fought a bitter civil war over the last 25 years, Muslims feel more and more marginalized. The professional classes perceive subtle signs of exclusion from the top jobs, and feel they have been victims of a conflict in which they had no part.

However, now that the government has been magnanimous in victory over the Tamil separatists, the wounds of the brutal war might heal relatively quickly. The reality is that the Tamils in the North were held hostage by the LTTE, probably the most ruthless terrorist organization ever created.

With Prabhakran consigned to history, it is possible that the island might emerge soon from its long nightmare, and the Sinhalese, Tamils and Muslims may live together in harmony, much as they have done for centuries.

Zanzibar Film Festival
Dealing with the Gruesome History of Slavery
Zanzibar was once one of the largest slave markets in the Indian Ocean area. Consequently, this year the Zanzibar International Film Festival's focus was on films that deal with the issue of slavery. Detlef Langer reports about the programme and the heated debates it stirred

Muslims in Laos
Hidden Beyond the Mekong
In terms of economic and political freedom, Laos still ranks among the most restricted countries in the world. It is all the more surprising, therefore, that the country’s Muslims enjoy considerable religious freedom. Yogi Sikand paid a visit to Southeast Asia’s smallest Muslim community

The Indian Subcontinent's Colonial Heritage
Divide and Conquer
The murderous terrorist attack in Mumbai at the end of November brought the religious and political fault-lines on the Indian subcontinent sharply back into the public eye. Their background, however, reaches back to the days of British colonial rule, as the historian Jörg Fisch shows

END_OF_DOCUMENT_TOKEN_TO_BE_REPLACED
Social media
and networks
Subscribe to our
newsletter