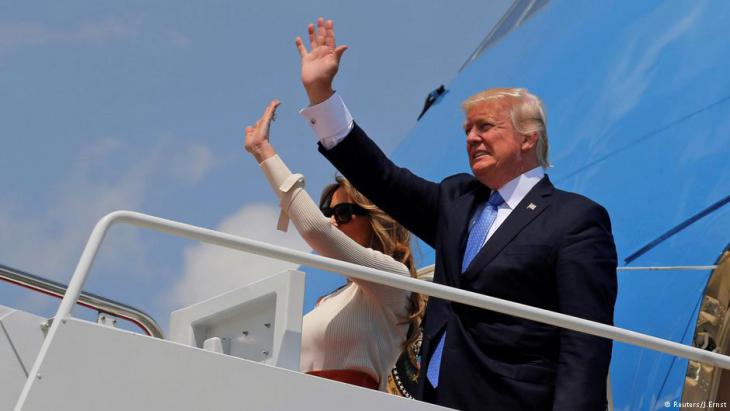 Islam, Judaism, Christianity and Donald Trump
So much cotton candy

This week U.S. President Donald Trump conducted a whistle-stop tour of three world religions, visiting Saudi Arabia, Israel and the Vatican within six days. Despite being spared any major diplomatic gaffs, the rest of the world has little reason to rejoice. Commentary by Alexander Görlach

One of the titles the bishops of Rome bear is Pontifex Maximus. Derived from the city′s ancient Roman past and literally meaning "supreme bridge-builder", this is a reference to the papal position between God and men, as mediator and final legitimate seal of all Catholic teaching. With U.S. President Donald Trump′s visit to the Vatican, it was tempting to nominate him Murifex Maximus, the "supreme wall-builder".

Both personalities, the Pope's and Trump's, could not be more different: when it comes to refugees Pope Francis urged Catholic clergy in throughout Europe to take in people in need from Syria. Donald Trump on the other hand declared that the U.S. would not take in any person that, in his world view, might or might not turn out to be a terrorist.

Donald Trump believes climate change to be a hoax by the Chinese. The Pope from Argentina on the other hand has a degree in chemistry and has been one of the protagonists in the negotiations of the Paris Climate Treaty behind closed doors. Nothing less than solving the Middle East conflict was the goal Donald Trump, self proclaimed "deal-maker", foresaw for his trip to the cradle of the three monotheistic religions.

Weapons to solve a conflict?

The only real deal, however, he sealed, was a hundred billion dollar deal in weapons. Speaking in Saudi-Arabia to about 50 Sunni Muslim leaders from around the world, he scapegoated Iran for all the terror that is committed these days in the name of Islam. 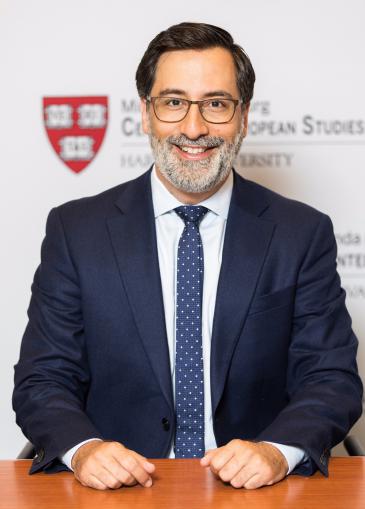 Alexander Görlach is a visiting scholar at Harvard University where he researches at both the Center for European Studies and the Divinity School, in the field of politics and religion. Alex is a senior fellow to the Carnegie Council for Ethics in International Affairs and an op-ed contributor to the New York Times

The facts withstand Mr. Trump′s claims: several terrorists of 9/11 were Saudi and Wahhabism, the militant ′Stone Age′ version of Islamic thinking, invented in Saudi Arabia of all places, is the main inspiration for groups like IS and al-Qaida. It is no secret that the Saudi monarchy sponsors terror organisations throughout the globe.

Not that Iran is a saint. Yet Mr. Trump failed to paint an honest picture during his presentation. No doubt keen not to lose the weapons deal, he was fulsome in his praise of the Sunni leadership, while roundly condemning the Shia. The U.S. president is adept at finding someone to blame: at home it is Mexicans, the Chinese, the Muslims.

By applying this rhetoric abroad – the trip to Saudi-Arabia, Israel and the Vatican was the first trip of the 45th commander-in-chief of the United States of America – he persisted in dividing the world into "us versus them".

This mechanism seems to be inherent to human behaviour, regardless of ethnic background or religious belief.

The French philosopher and anthropologist Rene Girard claimed that scapegoats are used to give the majority the feeling that a problem, a situation has been solved. The humiliation and banishment of the scapegoat is thus a source of great relief to the society in question, Girard continued. For the outsider, however, it is all too clear that the alleged culprit is not responsible for the disorder or dismay a society may be facing.

And indeed, neither homosexuals in Russia nor journalists in Turkey are in fact to blame for their countries′ problems, but rather their current autocratic rulers. It is therefore not illegitimate to put Mr. Erdogan, Mr. Putin and Mr. Trump in the same group. The U.S., however, remains a democracy, fighting with all its check and balances to repel the strikes of the populist Donald Trump.

At a time when representatives of religions are trying to be the agents of inclusion, raising their voices against extremism in God's name, it is anachronistic that ′the leader of the free world′ should be applying a rhetoric and displaying a world view that was once the bread-and-butter of religion. Anyone aspiring to such a claim cannot afford to adopt such a divisive stance. True, Donald Trump rightfully assessed that the war on terror is not a war being waged between Christianity or the West and the religion of Islam. Instead, the U.S. president regards it as a battle between good and evil.

Nevertheless, this pleasantly true statement does not suffice to disguise the true convictions of Donald Trump. Indeed one could argue the more scapegoat, the fewer deals. Someone who really delivers or speaks the truth about realistically achievable political goals has scant need of scapegoating the weak in society. This is the message of Christianity, Judaism and Islam. But it is not one that Donald Trump has understood.

Asmaa al-Atawna's debut novel "Missing Picture" has been published in German translation (Keine Luft zum Atmen – Mein Weg in die Freiheit). In it, she describes life in Gaza from ... END_OF_DOCUMENT_TOKEN_TO_BE_REPLACED

At the end of every year, the team at Qantara.de gives you a run-down of the ten most-read articles on the site over the past 12 months. Here is a quick overview of the stories ... END_OF_DOCUMENT_TOKEN_TO_BE_REPLACED

Palestinian Christians are an integral part of the Palestinian national movement. This is the conclusion reached by the Chilean-born Palestinian political scientist Xavier Abu Eid ... END_OF_DOCUMENT_TOKEN_TO_BE_REPLACED

Jesus – Issa in Arabic – doesn’t merely enjoy the highest place among the prophets in the Koran. He is also revered in Islam’s mystical tradition for his message of love and mercy ... END_OF_DOCUMENT_TOKEN_TO_BE_REPLACED

With reported hostilities against Israeli journalists and the flag of the Palestinian territories flying on the streets and in the stadiums, it is clear the World Cup in Qatar is ... END_OF_DOCUMENT_TOKEN_TO_BE_REPLACED

Comments for this article: So much cotton candy

God has a diet that is good for us physically and spiritually. That diet is found in the Qur’an and in the Torah. Over many centuries the various legal schools have developed God's diet somewhat differently within each religion, in both Islam and Judaism, but the basic principle has always been retained: “Humans should not live by bread alone, but by every word that comes from the mouth of the Lord” (Deuteronomy 8:3 and Matthew 4:4).

All animals must eat to live. This is a law of nature. Most animals only eat plants or other animals. Only a minority of living creatures are omnivores. And of all omnivores, only one animal voluntarily restricts its diet every day, and totally abstains from food and drink on specific holy days, because of a commitment to follow God's Divine Diet: human beings.

Why do Islam and Judaism restrict their adherents from the simple pleasure of food each year? For the entire the month of Ramadan, Muslims fast from first light until sundown, abstaining from food, drink, and marital relations. The Qur'an says "Oh you who believe! Fasting is prescribed to you as it was prescribed to those before you, that you may (learn) self-restraint," Qur'an 2:183.

And the Torah decrees a day of fasting for Jews (Leviticus 16:29, 23:27) when for twenty-four hours adult Jews (in good health) are supposed to afflict their souls by abstaining from eating, drinking and marital relations.

I also believe we should not make religion difficult for people to practice by adding an increasing number of restrictions to the commandments we received at Mount Sinai. During the six centuries between the birth of Jesus and the arrival of Muhammad in Yathrib (Medina), almost all Jews became Orthodox Jews. Orthodox Rabbis added many extra prohibitions to Jewish law and most Jews became Orthodox Jews and increasingly strict in their observance of the laws of Kashrut (dietary laws).

Orthodox Rabbis did not follow the principle of Muhammad as narrated by his wife 'Aisha: “Whenever Allah's Apostle was given the choice of one of two matters, he would choose the easier of the two, as long as it was not sinful to do so, but if it was sinful to do so, he would not approach it.” 'Aisha also said: “Whenever Allah's Apostle ordered the Muslims to do something, he used to order them to do deeds which were easy for them to do”. These are lessons Prophet Muhammad taught 12 centuries before the rise of Reform Judaism in the early 19th century.

Although most Jews today are no longer Orthodox Jews, if the Jews of Muhammad's time, had followed these teachings of Prophet Muhammad, Reform Judaism would have started 1,400 years ago. (In the U.K. Reform Jews are called Liberal Jews. Reform Jews in the U.K.are what we in North America call Conservative Jews.)

Food and drink are the most important single element of animal life. But unlike all other animals humans do not live by bread alone. The act of eating is invested with psychological and spiritual meanings. The Torah asserts that we should “EAT! BECOME SATIATED/SATISFIED! AND BLESS THE LORD!” (Deuteronomy 8:10) This is how I, as a Reform Rabbi interpret these words.

Humans, like all animals need to eat in order to live, but unlike all other animals some humans will not eat certain foods that other humans will gladly eat. This universal human trait proves that “humans do not live by bread alone, but humans may live on anything that God decrees.” (Deuteronomy 8:3) Thus by periodically not eating at all (fasting) Jews and Muslims live by God’s words.

END_OF_DOCUMENT_TOKEN_TO_BE_REPLACED
Social media
and networks
Subscribe to our
newsletter