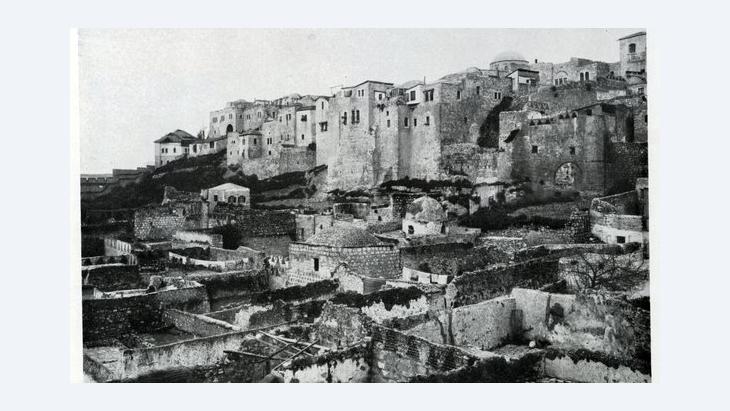 Islamic Archaeology in Israel
A Sea-change in Attitudes

﻿A group of Israeli historians and archaeologists is calling for a radical rethink in the way the region's past is viewed. They want a stronger focus on Palestine's Islamic eras, which have in the past been neglected in favour of its Jewish history. By Joseph Croitoru

﻿Something sensational is happening in the field of archaeology in Israel. For the first time ever, researchers of history and ancient history in Israel are focussing their attention on East Jerusalem's former Moroccan (or Mughrabi) Quarter, which was intentionally destroyed by the Israelis in 1967 in order to create more space around the Western Wall.

This emerging sea-change in attitudes, in which the Jerusalem-based medievalist Benjamin Z. Kedar is a driving force, is best illustrated by the case of the Afdaliyyah madrassa, which was situated in this very quarter. Built close to the Western Wall at the end of the twelfth century by Saladin's eldest son, al Afdal, the small Koranic school stood on this site for centuries until it was torn down by Israeli bulldozers at the end of the Six-Day-War.

﻿An aerial photo taken from a German Zeppelin

Kedar's attention was drawn to the madrassa in 2009 while he was conducting research as part of a joint Israeli/Palestinian/Dominican project on the Temple Mount. It was only possible to pinpoint its exact location with the help of an old aerial photo that was taken from a German Zeppelin in 1931. Armed with this photo, Kedar went in search of the site in Jerusalem. When he did, he was bitterly disappointed: Israeli archaeologists, who have been digging in the area to the west of the Western Wall for several years, had recently removed two-thirds of the remains of the building in order to uncover a lower layer dating from the Roman era. 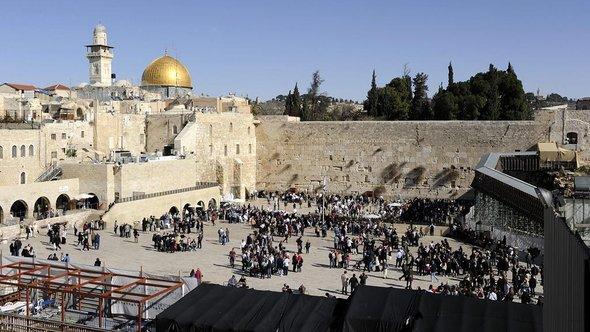 Digging up old and controversial history: Critics like Benjamin Z. Kedar say the significance of artefacts dating from the Islamic era of Palestine is not always recognised in Israel. Pictured: The Western Wall and the Dome of the Rock in Jerusalem, an archaeological battleground of Jewish and Islamic history

​​On the basis of the documentation relating to the dig and a number of artefacts discovered at the site, Kedar and his colleagues were able to reconstruct the history of the building for the magazine Revue Biblique (2/2012).

The madrassa, which was built between 1193 and 1196, originally comprised a 12 x 6-metre rectangular building topped by a dome with windows and flanked by two vaulted side rooms. In the western side chamber, the archaeologists also discovered a grave containing the mortal remains of a man who must have been about 30 years of age when he died. They probably belonged to Sheikh Id, who once taught at the institution. He probably died sometime in the second half of the seventeenth century at the latest. Since then, at least, the madrassa has been associated with his name.

﻿A site of archaeological and religious sensitivity

Kedar and his colleagues were not able to examine the eastern third of the destroyed and buried madrassa any more closely, and there is no hope that they ever will. The reason being that there are plans to build a big visitor centre in the western part of the square in front of the Western Wall. The project is highly controversial. Opponents of the plan argue that a service facility would be completely out of place at a site of such archaeological and religious sensitivity as this.

They have also rejected the compromise solution proposed by the designers – to integrate at least part of the excavated remains from the Roman era into the future complex as an archaeological exhibit – and insist that the entire excavation site must be preserved. For his part, Kedar insists that the remaining ruins of the madrassa must be uncovered and given the status of a protected monument. For the Western Wall Heritage Foundation, which initiated the project and would like to embed it in the context of Jewish history, this is a bare-faced provocation.

The medievalist's attempts to preserve the remains of the madrassa are, however, only one aspect of his campaign to ensure a more suitable approach to Palestine's Islamic heritage. As chairman of the board of the Israel Antiquities Authority, Kedar worked hard from 1999 to 2011 to raise awareness among Israeli archaeologists associated with the authority of the eras of the country's Islamic past. 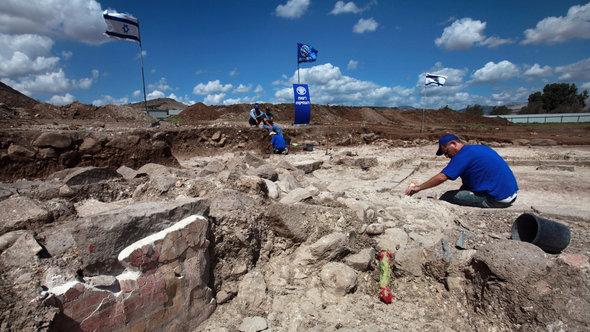 An increasing number of Israeli archaeologists are trying to raise awareness among their colleagues of the country's Islamic past. "The Islamic era, on the other hand, is considered no more than an alien element by conservative Zionist historians," writes Joseph Croitoru

​​To this day, he says that the authorities are still ignorant of these eras because most archaeologists still specialise in earlier eras. In his opinion, this focus means that the significance of artefacts dating from the Islamic era of Palestine is not always recognised. Kedar, who was born in Nitra in Czechoslovakia in 1938, is confident that a small but growing group of young, Israeli archaeologists and historians will help improve the situation. This group is determined to pay greater attention to the Islamic archaeology of Palestine, which has hitherto been neglected.

Katia Cytryn-Silverman, a young expert from Jerusalem, is providing important impetus in this respect. In 2011, she and a group of Israeli colleagues from a variety of disciplines who share her interest, launched a research project entitled "The Formation of Muslim Society in Palestine-Eretz Israel".

The idea behind the project can be summed up as follows: "We must look at the longue durée of almost 900 years: from the earliest days of Islamic rule to the end of the Mameluke era". For Israel, this is a revolutionary approach. After all, the Zionist version of history has for many years emphasised the continuity of the Jewish settlement of the country. It is this emphasis – together with references to the Bible – that underpins the national claim to Eretz Israel. The Islamic era, on the other hand, is considered no more than an alien element by conservative Zionist historians.

Katia Cytryn-Silverman and her allies don't see it that way. On the project website, they emphasise that starting in the seventh century, the people of Palestine underwent a profound demographic and socio-cultural transformation process, during the course of which the inhabitants of the land and their world underwent comprehensive Islamization. The group feels that the various aspects of this radical change as well as the rise and fall of the various Islamic states that followed one after the other in Palestine deserve to be researched.

At a time when people in Israel are becoming increasingly concerned about the electoral victories of Islamist parties in the counties of the Arab Spring, this is a decidedly courageous initiative on the part of the researchers.

The excavations conducted by Katia Cytryn-Silverman in the city of Tiberias on the shores of the Sea of Galilee demonstrate the valuable discoveries that such an approach can bring. With her heightened awareness of Islamic history, she was able to prove that the remains of a building resembling a basilica, which was unearthed in the city, was thought to date from the Late Roman era, and was even most recently considered to be the seat of the High Jewish Council (Sanhedrin), were actually the remains of a monumental mosque.

It was built early on in the Islamic era – probably sometime around the year 730 – during the rule of the tenth Umayyad caliph, Hisham Ibn Abd al-Malik. Not least because of this evidence, the history of Tiberias is being subjected to a thorough revision.

After all, it is now certain that the city was already a significant centre of Muslim life and in all likelihood an administrative city over a long period from the eighth century onwards. Zionist historians, who viewed eighth-century Tiberias as a flourishing, exclusively Jewish community, will now have to integrate these findings into their view of history.

Algeria‘s regime is again cracking down on anti-fracking activists and the unemployed in the country‘s south. Yet EU countries remain keen to scale up their energy cooperation ... END_OF_DOCUMENT_TOKEN_TO_BE_REPLACED

Anti-Semitic motifs have no place at Germany’s documenta art show or anywhere else in the world, stresses Meron Mendel, director of the Anne Frank Educational Centre in Frankfurt ... END_OF_DOCUMENT_TOKEN_TO_BE_REPLACED

Fifty-five years after Israel began occupying Palestinian lands, it is more difficult than ever to imagine a way out. The seeds of the two-state solution that were planted by ... END_OF_DOCUMENT_TOKEN_TO_BE_REPLACED

Yazan Khalili is spokesman for The Question of Funding, a collective of artists taking part in the leading German contemporary art festival Documenta 15. Here, he responds to ... END_OF_DOCUMENT_TOKEN_TO_BE_REPLACED

When times are tough, the exchange of ideas and perspectives becomes especially important. It takes dialogue. And at Deutsche Welle, we need distributors and cooperative partners ... END_OF_DOCUMENT_TOKEN_TO_BE_REPLACED

Every week, Jewish, Christian and Muslim youths meet to sing together. And they do so in the middle of a city where Israelis and Palestinians are often at loggerheads. Anja Koch ... END_OF_DOCUMENT_TOKEN_TO_BE_REPLACED
Author:
Joseph Croitoru
Date:
Mail:
Send via mail

END_OF_DOCUMENT_TOKEN_TO_BE_REPLACED
Social media
and networks
Subscribe to our
newsletter