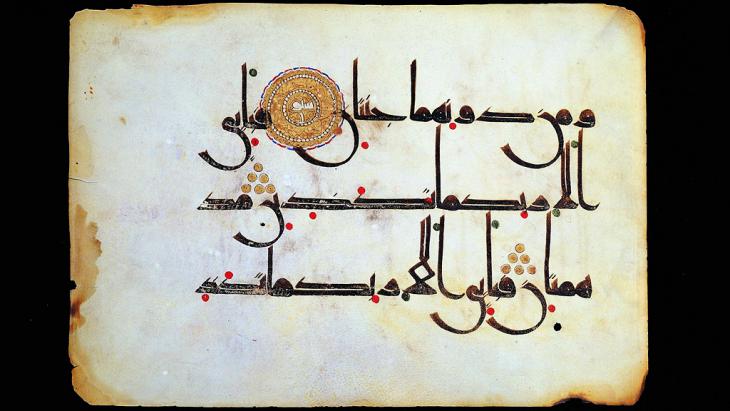 Although received wisdom would have us believe otherwise, Islam is not actually an anti-iconic religion. Indeed, down through the ages, it has always produced images. Today, artistic creativity needs to resist the appalling flood of visual information being produced by the jihadists. By Asiem el Difraoui and Antonia Blau

Nowhere does the Koran forbid images. As emphasised by the great historian of Islamic art, Oleg Grabar, Islam is not iconoclastic; it is aniconic in the sense that although during certain periods of its history, primarily Sunni movements avoided pictorial representations of divine creation, they did not violently destroy images. It is largely today that the impression that Muslims reject images is gaining ground. This is due to the barbarism of Daesh (Islamic State), which is not directed exclusively at humans, but also at the roots of its own Arabo-Islamic culture, as illustrated by the destruction of the pre-Islamic Arab city of Hatra or the Sumerian city of Nineveh.

This barbarism, however, has nothing to do with the culture of Islam. If Muslims have at times distanced themselves from figurative representation, it has been for reasons other than a prohibition prescribed by the Holy Book. The first generations of believers, for instance, took great pains not to be found guilty of idolatry. After all, in the year 630, did not the Prophet Muhammad himself destroy all statues and idols in the Kaaba in Mecca, Islam′s holiest of sites?

Moreover, Muslims also wanted to distinguish themselves from Christianity, which at the time was still dominant in most of the conquered regions, such as Syria and Egypt, and which itself debated the issue of imagery for a long time before St John of Damascus finally won the war of the icons. As a Father of the Early Church, a man who was highly knowledgeable about Islam and a minister of a caliph, John of Damascus was himself probably trying to draw a distinction between Christianity and Islam and even Judaism, which is why he allowed the Church to make the visual its principal means of communication.

The search for alternatives to figurative representation in Sunni Islam certainly does not indicate that Muslims did not create images. After experimenting with plant – and above all floral – motifs as a way of representing paradise, examples of which include the magnificent frescoes and mosaics in the grand Umayyad mosque in Damascus, the exploratory move towards even greater abstraction in the form of more complex geometric patterns began.

And so, a very specific art and culture was born in the Dar al-Islam, the house of Islam. On the one hand, this development gave coherence – and a sense of belonging – to one single civilisation across Islam's vast territories. On the other, it is evidence of the fact that Islam was indeed open to other cultures such as the Byzantine, Persian and Indian. Evidence of this can be found in the architectural treasures of Granada, Fez, Kairouan, Cairo, Jerusalem, Damascus, Samara and also Herat or Agra, to name but a few.

Islamic art and culture also flourished in media other than architecture. Decorative ceramic or metal objects of rare delicacy contributed to its development, as did science and calligraphy and, above all, the greats of Arab and Persian literature and poetry. Magnificently illustrated works such as the collection of fables of Kalila and Dimna, the maqama of al-Hariri and the "Arabian Nights″, or fifteenth- and sixteenth-century Turkish or Persian miniatures confirm that a reluctance to use figural representation was certainly far from being the norm. 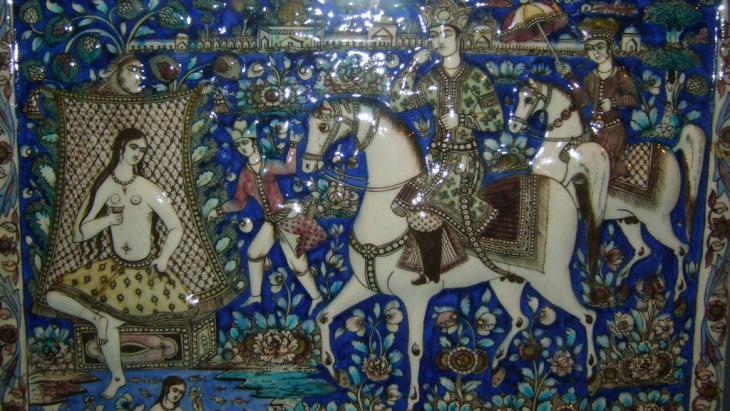 In celebration of figurative representation: such objets undeniably ″contributed to the development of Islamic art and culture,″ write Difraoui and Blau

Following the Crusades, Islamic art was a major source of inspiration for European art. In turn, the arrival of Western colonisers in the nineteenth century and their introduction of modern figurative painting triggered a shift in attitudes towards imagery across the Islamic world. Arab artists now began experimenting and contributing to the modernist discourse by negotiating their identity through their encounter with the West. From the portraits that emerged from Ottoman Beirut to Egyptian surrealism of the 1930s, works of art bore witness to the various interpretations of multiple modernities. At the same time, a cinematic tradition was emerging, especially in the case of Egyptian cinema and Hollywood on the Nile, which the Arabs simply adored. Visual arts played a key role in forging national discourse and, at the same time, contributed to the emergence of a pan-Arab cultural identity.

Today, satellite television channels and Web 2.0 are flooding not only the Islamic world but also the entire planet with visual information. Vacuous trite imagery is drowning out words and telling us nothing of the profound realities of the Arabo-Muslim world. What is worse, the media are spreading the atrocious images produced by the jihadists. With their extremist interpretation of the concept of idolatry, these jihadists are the heirs of wahhabism, the state doctrine in Saudi Arabia, which began destroying monuments to the memory of the companions of the Prophet in Mecca and Medina as early as 1803 and 1804. They are erasing the history of the civilisation to which they lay claim, without creating anything but an anti-culture of horror.

That said, the Arabo-Islamic world is also producing a multitude of profound images, where the act of creation is, as Gilles Deleuze puts it, an act of resistance to death and, by extension, to cultural death. It is moreover an act of resistance to the reductionist images of selective current events and to the destructive, nightmarish propaganda spread by al-Qaida, Daesh, Boko Haram and their ilk.

The past decade has born witness to a transformation of the artistic landscape in the Arab world. On the one hand, major events (biennials and trade fairs such as the Sharjah Biennial and Art Dubai – both in the United Arab Emirates) have been set up and major museums have opened. Arab artists are now on the radar of Western critics and curators and are on the markets, in galleries and at major institutional exhibitions around the world.

On the other hand, it was above all "the street" and its artists that played a crucial role in triggering the period of enormous upheaval that became known as the "Arab Spring". Visual art and music are crucial for self empowerment, that is, the emancipatory awareness of one's own power. Contemporary artists are favouring a trans-disciplinary approach, incorporating elements of civil society while referencing their own local context, and abandoning modern–traditional, national–post-national and colonial–post-colonial dichotomies. And even if the Arab Spring now seems to have been partly hijacked by Daesh or authoritarian regimes, these artists continue to create, configure and defend spaces where it is still possible to negotiate, discuss, dream and imagine.

"Chokran ya siedete al raiis" ("Thank you, Mr President")[1], a series by the Tunisian photographer Fakhri el-Ghezal, co-founder of the "Politics" collective in Tunis, is currently on show at MUCEM, the Museum of the Civilisations of Europe and the Mediterranean in Marseille. This series documents the void left by Ben Ali, i.e. the fact that portraits of him no longer hang on walls or in frames in the city streets. The void; just the void. However, it is in exploring this void that we realise that this space is now free and can be used either by the people or by reactionary forces.

A collective of 11 organisations in Ramallah, Jabaa, Jerusalem, Bethlehem and Gaza recently put together the /SI:N/ Festival in Palestine. The aim of this biennial, scheduled for the middle of Ramadan, is to "bring video creation and performance art into the Palestinian streets so that they can merge with the life of the people and shake up the way people look at things and the way they move around the city". Among the works from 15 countries on display is the experimental short film by Hasan Tanji entitled "Sweat", which was shot in 2009 and picks up on images of life in the Yarmouk refugee camp in Syria, now the battleground on which the tyranny of Daesh and Assad is being played out. The director himself grew up in Yarmouk and puts the viewer in the unusual and uncomfortable position of being able to see what it is like to be a permanent refugee, thereby giving him or her an insight into the current situation.

In short, real counter-narratives to the visual barbarism of Daesh and dictators like Assad do indeed exist. However, they have to be made audible and visible. For this to happen, support for creativity – and visual art in particular – and new aesthetic formats are needed in the Arabo-Islamic world. In most cases, Arab artists find themselves in difficult environments characterised by conflict, censorship, pressure, politics, neoliberal reality and the logic of cultural funding and policies that are either poorly adapted or non-existent. This is why the free movement of artists, art and ideas is crucial.

Asiem el Difraoui, writer and political scientist and Antonia Blau, manager of the liaison office at the Goethe-Institut, Marseille.

Welcome to the world of Al Qasar, where Arabic music collides head-on with punk and psychedelic to create something powerful and beautiful. "Who Are We" is a raucous, subversive ... END_OF_DOCUMENT_TOKEN_TO_BE_REPLACED

Egyptian authorities have Mada Masr in their sights once again after critical reporting. But the editor of the country's last independent news source is adamant they will continue ... END_OF_DOCUMENT_TOKEN_TO_BE_REPLACED

Like Christianity, Europe's history is one of migration. Both have strong roots in the Orient and in cultures thousands of years old. Cultural historian Bernhard Braun invites us ... END_OF_DOCUMENT_TOKEN_TO_BE_REPLACED

When she ascended the throne, millions of Muslims still lived under British rule. Later, Elizabeth II appealed for tolerance in a multi-religious society. She was the first ... END_OF_DOCUMENT_TOKEN_TO_BE_REPLACED

END_OF_DOCUMENT_TOKEN_TO_BE_REPLACED
Social media
and networks
Subscribe to our
newsletter