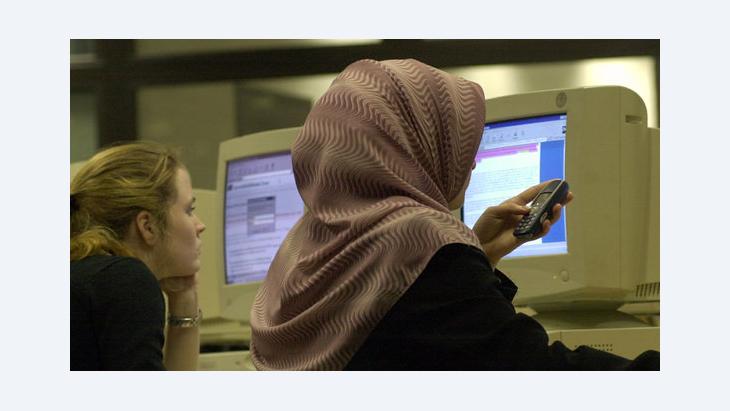 A Kind of eBay for Muslims

﻿From trendy headscarves to prayer rugs with integral compasses, Selisha.de has everything the devout Muslim could possibly wish for. It is the very first Islamic auction website in the world. Aygül Cizmecioglu has the details

﻿At first glance, Selisha.de looks like any other Internet auction portal: users can buy, sell and bid for items. One noticeable difference is that users are greeted with the words "As salamu-alaykum" (May peace be with you) and every search begins with Allah's blessing "Bismillah" (in the name of God).

The platform has been online for two years now. Its slogan translates as "Everything the Muslim heart desires and more ..." – a reference to the incredible range of things on offer: from pink headscarves with striking glittery embroidery to plastic alarm clocks with integral call to prayer and a compass that shows the faithful in which direction Mecca is when he or she is on the move.

Selisha.de is the brainchild of Selim Reid, a Hamburg student with Iraqi roots. "In Germany alone, there are about 3.5 million Muslims like me. But unfortunately, online platforms like eBay are not tailored to meet our needs," he explains. "If at all, you will generally only find a few prayer rugs here and there, mostly in only one colour. And by the time you find one, it has long since been sold."

The online portal and Islamic auction website Selisha.de offers tips about Islamic buying and selling and clarifies that bidding in an auction is indeed permissible according to Islamic law. Insults, anti-Semitism, and racism are absolutely taboo

​​This was a gap that Selim Reid wanted to close by establishing Selisha.de. The enterprising young German knows his way around the Islamic community and has already founded "Muslimtaxi", a carpooling service for Muslims.

Islamically correct across the board

Initially, his own family and friends were sceptical whether the online idea would work at all. Now, however, Selisha.de is a successful, growing start-up. After a short registration process, both private people and professional dealerships can buy, sell and bid for items.

"And," Selim Reid is quick to emphasise, "everything works in accordance with the morality rules laid out in the Koran. That means that forcing up prices is strictly forbidden. We use internal software programmes to keep an eye on this and are constantly taking random samples." On eBay, it is possible for a friend of the seller to bid in an auction, thereby pushing up the price. It is not legal, but it is not checked as strictly as Selim Reid's online platform.

The online portal and the Islamic auction website Selisha.de also offers tips for Islamic buying and selling and provides answers to the question as to whether bidding in an auction is "halal", i.e. whether it is permissible according to Islamic law.

"Buying and selling is even recommended in Islam; most people just don't know it," says the young entrepreneur. In order to be on the safe side and to ensure that the faithful were not frightened off, he obtained a fatwa, a legal pronouncement in Islam, from an Islamic scholar and posted it on the website.

It was this that convinced Fatma to use the site a few months ago. A devout Muslim, Fatma lives in a small village in the Rhineland and was delighted by the colourful selection at her fingertips. "Otherwise I would have to travel quite a distance to the next major city to buy myself a fashionable headscarf," explains the 56-year-old. Older women like Fatma are some of the website's most active users. 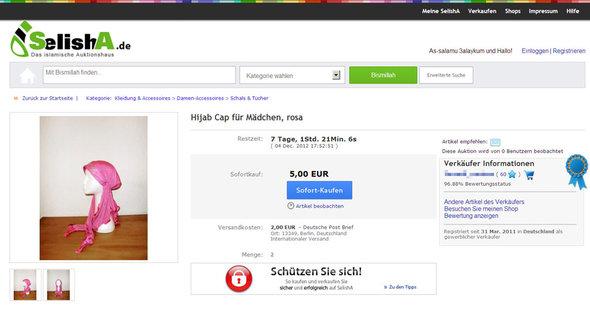 "In Germany alone, there are about 3.5 million Muslims like me," explains founder Selim Reid. "But online platforms like eBay are not tailored to meet our needs." Reid rejects the notion that the website is an act of "virtual ghettoisation"

​​Surprising as it may seem, the site also features pretty underwear. They are shown on mannequins; using attractive real-life models would not be allowed. "As a devout Muslim, I find that very pleasant," says Fatma. "What's more, I can buy such private things on my computer in the comfort and privacy of my own home, and no one sees me doing so." In addition to the anonymity it offers, there are also practical aspects to the portal: "I find whatever I am looking for at a glance. There are quite a few categories, for example, on Islamic literature or on everything you need for the Hajj in Mecca. It is clearer and you find things more quickly than you do, say, on eBay," says the housewife.

One thing the site does have in common with the American online giant is its faith in its own users and a strong principle of self-regulation. Just like on eBay, users on Selisha.de can post comments and ratings and can report any infringements of rules. "Once, when someone wanted to sell a copy of 'Mein Kampf', hundreds of users were very upset and sent an e-mail reporting the matter within the space of three minutes," says Reid proudly. Insults, anti-Semitism, and racism are absolutely taboo on Selisha.de.

Both Selim Reid and Fatma reject the accusation that the website is an act of "virtual ghettoisation". Both say that Germany is their home and that they are devout Muslims. As far as they are concerned, this is not a contradiction in terms. They just want something that has become second nature for millions of other people in Germany: to shop quickly and easily on the Internet.

END_OF_DOCUMENT_TOKEN_TO_BE_REPLACED
Social media
and networks
Subscribe to our
newsletter