The effects of the global financial crisis are also being felt on the stock markets of the Arab world. It is no surprise, therefore, that finding ways out of the current crisis was at the top of the agenda at the recent World Islamic Economic Forum in Jakarta. Does "Islamic Banking" have the answer? Peter Philipp reports

​​The Saudi royal family has reacted to the financial crisis, which is increasingly taking hold of the Arab world, by putting together an aid package. King Abdullah recently made almost 5 billion euros available for distribution to families who are feeling the pinch.

The feeling of panic or at least the fear of making major losses has reminded many Arabs, Iranians, and Muslims elsewhere around the world that some of what has happened might have been avoided if the tenets of Islam had been observed.

After all, there is a banking system in the Muslim world that is based on religion, namely the Islamic banking or finance system. Although it has not to date been declared the sole valid banking system in any country, it is gaining in popularity, particularly with the general public. The sector is said to be growing by 27 per cent per annum.

Moreover, Islamic law stipulates that all financing activities must be linked to a real economic transaction. "It is essential to know exactly what the transaction is based on. If someone wants to buy a house, can it be sold to him in instalments? At first glance, it might look like a loan, but ultimately, it ensures that those involved know exactly what is happening," says Gassner.

Close inspection of the details 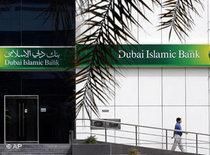 The global financial crisis has affected the countries of the Gulf in different ways: while Dubai is struggling with a sharp decline in investment, the effects are barely being felt in Oman

​​If the rules of Islamic financing had been in place, the subprime mortgage crisis in the USA, which triggered the current financial crisis, could never have happened. If the details had been closely inspected, it would have been evident in many cases that the people taking out the mortgage would never been in a position to repay it.

Similarly, short selling - whereby money is earned not by selling goods or providing services, but by cleverly using capital to generate major profits (or major losses, as the case may be) - would have been prevented.

The same can be said for earning interest: Islam forbids the faithful to "let money work". There are other strict rules in the system: businesses that are not compatible with the "Sharia", i.e. with the Islamic code of religious law, may not be financed. Naturally, it is forbidden to trade in pork, pornography, or gambling.

This last ban not only applies to doing business with casinos, but certainly also to gambling-like behaviour on the international finance markets, where conventional rules of economics were abandoned and where "financial products" that were not even understood by many of those who were dealing in them suddenly appeared.

Gassner considers this a major problem in itself: "the economy lacks a stronger ethical orientation," he says.

Gassner is, of course, well aware that "Islamic Banking" is the exception rather than the rule even in the Arab world, where the western system of loans and interest is also in place. However, he goes on to say that the banking system in these countries is not yet advanced enough to develop its own - Islamic - character.

Gassner explains that the general public is aware of what the Koran has to say about financial transactions and is pushing the banks to come up with products that are compliant with the laws of their religion. In some Arab states, particularly in the Persian Gulf, Islamic banks already account for up to 50 per cent of all banks.

Just how such banks operate according to the principles of Islam is illustrated by an example from Germany. In 2004, the state of Saxony-Anhalt decided to sell public buildings to an Islamic Foundation in the Netherlands, which then rented these buildings back to the state and sold shares in the building to investors in the Arab world.

Ever since the first Islamic banks opened in the 1970s, hundreds of others have been set up around the world. Even western banks have begun to discover "Islamic Financing" in order to enhance their business prospects in the Islamic world and offer Muslims living in the West an acceptable form of banking.

However, their success depends on how quickly the Islamic world makes the transition to the Islamic banking system. Michael Gassner is not very optimistic: "It is not possible to say with any certainty that everything will become entirely Islamic," he says. "It will undoubtedly take a very long time; after all, the Islamic world is not populated by practising Muslims alone."

Interview with Vanessa Steinmayer
"Islamic Financial System Is Not a Serious Alternative"
The current financial crash has wide-reaching consequences for the world's economy, many of which are yet to come. Élena-S. Eilmes spoke to the financial expert Vanessa Steinmayer on how the Islamic countries are affected, and whether an Islamic financial system would be less prone to crises

Islamic Funds
Shares Overseen by Sharia
On the international financial markets one can now find "Islamic finance" and investments which conform to Sharia law. Matilda Jordanova-Duda looks at what makes them different

END_OF_DOCUMENT_TOKEN_TO_BE_REPLACED
Social media
and networks
Subscribe to our
newsletter