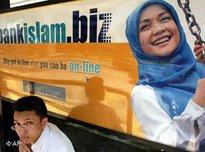 Islamic banking is particularly dynamic today in the Gulf States and in Malaysia, where Islamic and "conventional" banks compete freely (photo: AP)

​​The term "Islamic finance" has come to stand for a comprehensive system of business transactions in keeping with Islamic law. Closely related and encountered almost as frequently is the expression "Islamic banking," revealing the central role played by banks in this field.

Of course, it is difficult to construct a complete economic system from Islamic sources alone – even if these include not only the Koran but also the traditions passed down by the early Islamic community surrounding the Prophet Mohammed.

But at least certain principles crystallize out that suggest a kind of "social free market economy" as the most appropriate one for Islam. While this economy recognizes that profits can be made and prosperity achieved through commercial dealings (economically speaking, this means that people have a right to private property and that prices can develop freely according to supply and demand), there is also an emphasis on social duties, such as donating money to help the poor and the needy.

Examples of Koran verses cited as reference are: "When the call is proclaimed to prayer on Friday (the Day of Assembly), hasten earnestly to the Remembrance of Allah, and leave off business (and traffic)! ... And when the Prayer is finished, then may ye disperse through the land, and seek of the Bounty of Allah: and celebrate the Praises of Allah often (and without stint): that ye may prosper." (Koran 62: 9-10)

"O ye who believe! Give of the good things which ye have (honorably) earned, and of the fruits of the earth which We have produced for you! And do not even aim at getting anything which is bad, in order that out of it ye may give away something, when ye yourselves would not receive it except with closed eyes!" (Koran 2:267).

Western (as well as Muslim) scholars of Islam point to the historical background behind the revelations in the Koran, arising as they did in the city of Mecca with its flourishing trade. According to conservative Islam, the Koran is the genuine word of God, which retains its validity irrespective of spatial and temporal limitations.

In addition to the above, there also exist a few more tangible restrictions with respect to commerce. The first is the general prohibition of gambling, which is derived from the Koran's ban on "maisir," a game in which arrows are used to determine who gets the best pieces of a slaughtered camel.

A ban on speculative business ("gharar") can also be deduced from Islamic sources, which some believe is applicable to short-term speculators who try to make the most of temporary fluctuations in exchange rates.

The most far-reaching restriction that can be derived from the Islamic body of rules is without doubt the prohibition of "riba," which is often, and not entirely correctly, interpreted as a general ban on interest. This word of controversial origin is used in the Koran in connection with moneylenders who demand excessive interest and can be translated as "usury."

Today, the proscription is interpreted as meaning that no interest at all may be charged on credits that are granted. Interest-like structures are permitted for sales transactions, however: if someone defers payment on a purchase, for example, the Islamic jurists recognize that a surcharge on the price may be demanded for the delay.

In the mid-20th century, the first forerunners of today's "Islamic banking" began to appear on the scene. In 1963, for example, Dr. Ahmad al-Najjar of Egypt, inspired by West German cooperative banks, founded a bank in the Nile Delta that managed to make do without charging any interest whatsoever, investing the customers' money in equity models or in its own business activities.

The experiment ended just a few years later under ominous circumstances, most probably financing problems. The Islamic republics of Sudan, Pakistan and Iran have arranged large portions of their state systems – including the banks – in accordance with Islamic rules.

The strongest dynamic in this field comes today from the Gulf States as well as Malaysia, where Islamic and "conventional" banks compete shoulder-to-shoulder, the former already managing to conquer a market share of up to 20 percent, with a rapid upward trend.

Increasingly, Western banking institutions are starting to offer their own Islamic products from special departments: for example, business loans tailored to Islamic customers.

Criticisms have been voiced that Islamic products often merely imitate conventional ones and, other than in name, do not offer any specifically Islamic characteristics. This goes especially for products that copy interest-like structures.

A real estate credit is for example replicated by the "murabaha" transaction, in which the bank often purchases the property for the space of one second only and then sells it to the end customer on an installment plan. The installments are calculated to include the interest that would be charged on a classic mortgage.

Critics demand that such credit-like structures be limited or done away with entirely; only interest-free credit should be offered, or investments with full participation in profits and losses ("mudaraba"). However, the fact is that the average household often needs to borrow money to finance big-ticket purchases (house, car, stereo system) since such items cannot be paid for with the available cash on hand.

As long as these purchases are designated only for a consumer's own use, "mudaraba" does not apply, since no profit is being made. The success of "Islamic finance" will depend on whether Islamic product alternatives are created that offer not only conformity with Islamic law (which, just like in other legal systems, can be applied more or less flexibly) but also answer the needs of the broader Islamic population.

Dr. Klaus Hachmeier lives in Frankfurt and works for the BHF Bank, which recently opened a branch in Abu Dhabi. He is a scholar of Islam and an economist.

Islamic Economy
For Muslims, Profit Is Not a Dirty Word
Many Muslim economists criticize the dominant western economic systems that are forced upon other cultures. They demand a fundamentally different, Islamic economic system. By Sibylle Pohly-Bergstresser

Islamic Holdings
Fraud, in the Name of God
In recent years, so-called "Islamic holdings" have cheated investors across Europe out of millions. In Germany alone, it is estimated that 200,000-300,000 mostly Turkish Muslims have fallen victim to investment fraud. Ariana Mirza reports

END_OF_DOCUMENT_TOKEN_TO_BE_REPLACED
Social media
and networks
Subscribe to our
newsletter