Islamic Feminism in Iran
Equality at Half Mast

Zanan Magazine, a reform-minded feminist magazine in Iran, has been active in promoting women's rights for the last 16 years. Now authorities revoked its license. Margot Badran on Zanan's so-far achievements 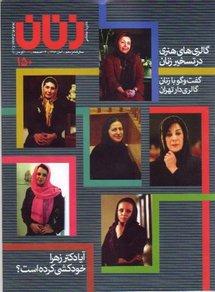 Founded in 1991, Zanan was the leading feminist magazine in Iran, covering topics like spousal abuse, honour killings, and sex trafficking

​​Zanan (Women) has been at the forefront in debates on women and gender within the framework of an egalitarian interpretation of Islam and for examining women's experience in Iran and their contribution to society. From the start Zanan has had a dual existence: in Iran and in the world.

Zanan's news and views spun around cyberspace so fast it was clear it was onto something: gender equality and gender justice within Islam – exactly where much of the world thought it was missing.

Now Zanan has been summarily shut down by authorities in Iran.

Zanan was founded in 1992 by Shahla Sherkat, a seasoned journalist and magazine editor. From 1982 she had served as editor of Zan-e Ruz (Today's Woman), a publication of the state-run Kayhan publishing house, before being pushed out in 1991 along with a number of others. They went on to found and write in independent publications and came to be known as the new religious intellectuals.

Sherkat, the only woman among them, had already begun to bristle at Zan-e Ruz's conservative line (that she had been originally hired to develop). By the time of her dismissal she was eager to start her own independent journal on women and gender. She pulled together, marshaled minimal resources, and created Zanan.

With her new vision, clear determination, and solid experience in journalism, along with the support of like-minded thinkers, Sherkat launched an independent gender-progressive journal. In the pages of Zanan, women, along with male contributors (using female pseudonyms), including rising religious scholars, published their reinterpretations of the Qur'an and other religious texts articulating egalitarian readings of Islam.

This coincided with the moment – the 1990s – when similar initiatives were surfacing among Muslims elsewhere in efforts to move beyond the constrictions and inequities of patriarchal versions of Islam. This new women-sensitive and gender egalitarian discourse was soon called Islamic feminism.

Recognized as a preeminent site for the development of the new Islamic feminism, Zanan played a leading role in the shaping of debates beyond the borders of Iran. International scholars such as Ziba Mir-Hosseini, Afsaneh Najmabadi, Val Moghadam, and Nayereh Tohidi were among those who helped bring the journal's pioneering gender thinking to wider attention.

From Egypt to South Africa, from India to Malaysia and Indonesia, Zanan was prominent in the global conversation on Islamic feminism as I witnessed first hand during my travels in the 1990s and later.

Necessary connection between theory and practice

Islamic feminism has always been concerned with the necessary connection between theory and practice, that is, with the imperative of implementing the principles of gender equality and justice. Zanan simultaneously examined social problems in Iran – of the sort that plague women elsewhere – such as divorce, child custody, domestic abuse, public forms of violence against women, the spread of HIV/AIDS, and prostitution in an effort to help ameliorate conditions for women.

Sherkat and her contributors understood well that it is only by recognizing such issues that society can begin to solve them. Zanan, meanwhile, provided women with legal advice, health tips, and information on business in the effort to help them improve their lives and the lives of their families.

At the same time the journal promoted women's creative work acting as a conduit for dissemination of their literary works, art, photography, and film all of which have won the admiration of an enthusiastic global audience.

Now after sixteen highly successful and high profile years, on a road that has been more than occasionally bumpy (the journal weathered three court trials) Zanan has been suddenly silenced. On January 28th the stark pronouncement came: "Zanan's license has been revoked."

This declaration emanating from the Press Supervisory Board was issued by FARSNEWS, a news agency reputed to be close to Ahmadinejad's administration, rather than through Iran's official news agency IRNA, the more routine channel for announcing government decisions.

Revoking a journal's license, moreover, lies outside the jurisdiction of the Press Supervisory Board. Still to date, apparently Sherkat herself as the license holder and managing director of Zanan still has not received any official notice, a necessary step legally.

Speculation, of course, is rife. Is the shut-down something that a few disgruntled individuals on the Press Supervisory Board tried to rush through giving the appearance of a fait accompli? Can the action flying in the face of official procedures be reversed? Is this part of a broader picture of growing oppression and silencing of liberal forces? Amid the confusion, hope mixes with despair.

Zanan has been accused of painting a black picture of the Islamic Republic of Iran and constituting a psychological threat to society. Onlookers can only watch the instant boomerang of such outlandish allegations. It is still to be seen if the revocation of Zanan's license was a bad mistake at the hands of an ill-intended few that will be rectified or a permanent act.

Whatever happens, Zanan's incomparable work itself can not suffer shut-down. Zanan's contribution to the development of Islamic feminism is permanently inscribed in our books and its vision remains alive.

Continuing to advance the discourse and practice of equality and justice within Islam that has been Zanan's resolve will be conducted beyond the borders of Iran. If anything, this turn of events, will cause it to be intensified. The hundreds upon hundreds that are mobilizing around the world this very minute on behalf of Zanan and the injustice that has befallen it attest to this.

This article was previously published on Al-Ahram Weekly.

Media in the Islamic Republic of Iran
Between Self-censorship and Repression
Mass media in Iran are subjected to censorship and the tyranny of state control. Journalists who refuse to toe the line and follow the official ideology have to be prepared to suffer severe repression – or to flee abroad. By Asghar Schirazi

Iran's Independent Journalists under Pressure
Walking A Tightrope
Since Ahmadinejad came to power in Iran, the independent, critical press has seen its already restricted political freedom being eroded even further. But hardliners are also increasingly zeroing in on bloggers and members of Internet forums. By Arian Fariborz

END_OF_DOCUMENT_TOKEN_TO_BE_REPLACED
Social media
and networks
Subscribe to our
newsletter