Fraud, in the Name of God

In recent years, so-called "Islamic holdings" have cheated investors across Europe out of millions. In Germany alone, it is estimated that 200,000-300,000 mostly Turkish Muslims have fallen victim to investment fraud. Ariana Mirza reports 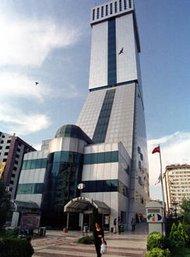 ​​The emotions oscillate between resignation and anger. Many had laid aside every penny they could spare of the money they earned as so-called "guest workers" in Germany. Now they face financial ruin. "All we really wanted was to abide by the prohibition against interest," explains Suleiman Ünol. The sixty-seven-year-old retiree is attending an informational meeting organized by the Turkish editorial board of "Radio Multikulti" in Berlin, Germany.

The mood in the auditorium is tense. Many think it is hopeless to fight against the thieving holding companies, to which they once entrusted their entire savings in good faith.

The fraud scandal that has cheated hundreds of thousands of Muslims like Suleiman Ünol began in Turkey. In the 1990s an investment model, the "Konja Model," spread rapidly there, promising high yields while adhering to Islamic financial rules. A committee in the Turkish Parliament recently counted 78 holdings based on this model in Turkey.

The principle is simple. Private persons buy share certificates and become shareholders in the companies, which are active in various economic sectors. Yimpas Holding, for example, had been particularly active in Germany and opened up a chain of department stores there at the start of the new millennium.

At first everything seemed to be going well. The first buyers received high returns on their shares. But soon it became apparent that these payments were calculated to induce a snowball effect. The intention behind the high yields was to attract more investors, and to bring in more money. Company records show that at the high point of the fraudulent scheme, Yimpas brought in 2.9 billion euros. But no real profits were earned by the department stores. The dream ended for the pious Yimpas investors in the summer of 2002.

The investors' money was intentionally misappropriated. And those who lost money have little hope of recovering it, despite the fact that a few hundred have already successfully agued their cases in German courts. Yimpas is now just a post office box business in Switzerland, and Kombassan Holdings, also active in Germany, only lists an address in Luxembourg.

Since 2005 Germany has had an international arrest warrant out for Yimpas' managing director Dursun Uyar. But in Uyars home country of Turkey, the arrest warrant has not been officially acknowledged.

The "Solidarity Association of Turks in Europe" has been working hard to change this since its founding in May, 2005. Over 100,000 fraud victims have inquired at the organization about their legal situation, over 20,000 have already joined the association. The president of the organization, Muhammet Demirci, is preparing class action suits against the criminal holding companies. Demirci believes that the number of victims in Europe could be as high as 800,000. "But very few are willing to go public, most of them are too ashamed."

"You can only trust other Muslims"

The organization Milli Görüs, which is under observation by the German Federal Office for the Protection of the Constitution, plays a key role in the fraud scandal. Members and functionaries of Milli Görüs recruited heavily for the holdings in mosques and Islamic associations. "At the mosque they told me you can only trust other Muslims, fellow countrymen. Give them your savings, you won't regret it," says Suleiman Ünol.

Many victims also suspect that Milli Görüs is behind the delays and defeats in many court cases in Turkey. "The current governing party AKP, Milli Görüs, and the holdings have had a close association for years," says Muhammet Demirci. He is hoping for support from the EU, and in particular from the German government, in forcing the Turkish government to more vehemently pursue and prosecute the corrupt holdings. "Political pressure must be increased. Many of us are German citizens, we demand more action from the German government."

The fact that retiree Suleiman Ünol has decided to demand justice with the help of the solidarity organization is almost a miracle. Recently he was told in a Berlin mosque: "The Germans won't help you, you'll have to pay fines to the tax authorities and your pension will be cut when they learn that you invested your money in a Turkish company."

This kind of false information is currently circulating in many Turkish communities across Germany. Usually it is Milli Görüs standing behind the rumors. "They are spreading fear in order to keep down the number of law suits," says Muhammet Demirci.

Islamic Economy
For Muslims, Profit Is Not a Dirty Word
Many Muslim economists criticize the dominant western economic systems that are forced upon other cultures. They demand a fundamentally different, Islamic economic system. By Sibylle Pohly-Bergstresser

Study on "Ethnic Economy" in Germany
Immigrants Show More Entrepreneurial Spirit Than Germans
The image of immigrants compounding Germany's jobless misery has been proved wrong by a study that says migrants take the plunge into self-employment more frequently than Germans and employ over a million people. By Manfred Götzke

Turkish Companies in Germany
Wanted: Turkish Immigrant Workers
The Economic Development Corporation is wooing Turkish investors for the state of North Rhine-Westphalia: at a recent conference in Turkey, it was a case of entrepreneurs courting entrepreneurs. Elmar Kok reports from Izmir

END_OF_DOCUMENT_TOKEN_TO_BE_REPLACED
Social media
and networks
Subscribe to our
newsletter