Forgotten, stolen and now rediscovered: In West African Timbuktu, families have maintained thousands of Islamic manuscripts down the centuries. Private individuals such as Abdelkader Haidara are now working to protect and digitise this African library heritage. By Charlotte Wiedemann 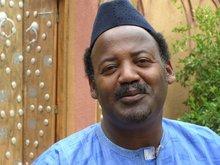 "We're in the process of losing our Islamic culture": Abdelkader Haidara owns 9000 manuscripts and now employs 12 people at his private library. He is fighting to preserve the valuable manuscripts in their place of origin

​​Abdelkader Haidara is a man who answers his emails quickly. And alongside his good connections in the modern world, this rotund and friendly man is also at home in an entirely different epoch: the centuries when his hometown of Timbuktu was a stronghold of Islamic scholarship.

Some 100,000 ancient manuscripts testify to this epoch today. Written in Arabic, at that time the language of the elite in West Africa, they cover subjects as diverse as Islamic law, philosophy, medicine, astronomy and mathematics. Haidara owns one of the oldest manuscripts: a Qur'an dating from the 13th century, written on gazelle vellum.

Haidara inherited 9000 manuscripts from his father, the largest private collection in Timbuktu. He opened them up to the public, starting a new trend: private owners preserving their treasures themselves rather than placing them in the care of the Malian state. "The families are the best keepers of their own intellectual heritage," says Haidara.

But can it work? After all, this is a matter of the maintenance and conservation of highly fragile historical documents. On top of that, Western experts couple funding projects with the expectation that what's being called the "oldest library south of the Sahara" will soon be available for academic study in digital form. Yet Timbuktu's manuscript owners have been developing a new stubborn confidence.

To this day, Europeans associate the city with the end of the world. Yet in actual fact, it was a centre of the southern world over centuries – a trading hub and Islamic university town. Where the Niger delta and the Sahara meet in modern-day Mali, the highways crossed back then: from the North came the caravans, along the river came the gold of West Africa. The merchants drew the scholars and by the 15th century, Timbuktu had 25,000 students – almost as many as the city's modern-day population.

For some years now, the families have been opening the chests where they keep their yellowing gilded calligraphies. The media has created a new Timbuktu legend, claiming that Africa's lost history is contained in "desert scrolls". More to the point, however, the manuscripts are evidence that "Africa has had a share in Islamic knowledge for almost a thousand years," says the German Islam scholar Albrecht Hofheinz; he is in charge of a digitalisation project for the manuscripts at the University of Oslo.

Some came from Andalusia, from North Africa and the Middle East, while others were written by African authors in Timbuktu itself. African languages were also written in Arabic for diplomatic correspondence and contracts.

Buried in the sand from colonial confiscation

Unlike most of his compatriots in Francophone Mali, Abdelkader Haidara, 45, was educated in Arabic. His family kept its Arabic-Islamic heritage alive; each generation handed the manuscripts down to the next from the 16th century onwards. 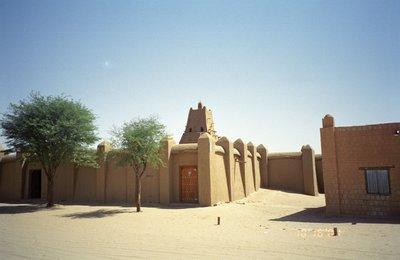 The Sankóre mosque with its characteristic traditional mud structure is a UNESCO World Cultural Heritage site. Timbuktu was a Islamic university town for centuries – with up to 25,000 students

​​Haidara's father studied in Sudan and Egypt, buying manuscripts and still copying them by hand. At that time, many other families in Timbuktu began locking their libraries away, sometimes even hiding them in holes in the sand – fearing they might be confiscated by the French colonialists. In the former royal city of Segou, the French had misappropriated valuable manuscripts – which are still held in the Paris National Library to this day.

As a propagandist for private initiative, however, Abdelkader Haidara is a fairly recent convert. He spent almost twenty years buying up manuscripts on behalf of the state-run Ahmed Baba Institute in Timbuktu; some 30,000 are now archived there.

Haidara convinced hundreds of families to part from their heritage for relatively small sums – Mali is a poor state. Yet he changed his outlook radically when he took charge of his own family's library. The testament handed down across the generations banned the sale of the manuscripts – and Haidara turned that obligation into a passion.

He was the first to open a private library in 1993, encouraging other families to do the same. The result was a genuine boom: Timbuktu now boasts 32 of these family libraries. People are now increasingly aware of the value of their heritage, including in material terms.

From dusty chests into digital libraries

Back when Haidara first looked for financial support abroad some fifteen years ago, nobody wanted to believe his story of an ancient African library.

The turning point came in 1997, in the person of an Afro-American: Henry Louis Gates, head of African American Studies at Harvard, saw the manuscripts and was immediately taken with them, finding sponsors for the library in the USA. Haidara smiles: "Isn't it strange that Gates got famous for something very different later on?" The professor was arrested for allegedly breaking into his own home – a sign of just how pernicious racism remains in the US, even in the Obama era. 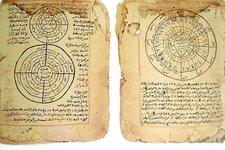 Islamic law, philosophy, medicine and – as in this case – astronomy and mathematics: Mali's valuable manuscripts cover a range of topics. "Africa has had a share of Islamic knowledge for almost a thousand years," says the German Islam scholar Albrecht Hofheinz

​​Haidara's library, named after his father Mamma Haidara, has grown into a small enterprise with 12 employees. In 2008 the Juma Al Majid Center for Culture and Heritage in Dubai helped him to set up a laboratory for the repair, conservation and digitalisation of the manuscripts. Whereas the state-owned Ahmed Baba Institute scans the manuscripts, Haidara prefers to use digital photography: "That's the state of the art," says a proud Haidara, "and it's much easier on the manuscripts."

He now even makes the acid-free paper required for repairing the documents – previously imported at great expense – in his own workshop. And he's thinking of new projects: "Timbuktu paper! We could do all sorts of things with it! Gifts for tourists – or we could export it."

Manuscript studies at the end of the world

There's a workshop going on right now on the top floor. Azawagh Arabs with short beards, Tuaregs with turbans and reading glasses, African faces – the mixed gathering of manuscript owners is learning about digital catalogues.

The NGO Savama has invited them; the group works towards popularising the heritage, with local translation commissions and vacation courses. "Owning manuscripts that you can't understand is shameful," says Haidara. "We're in the process of losing our Islamic culture. The Sufi schools that taught a tolerant Islam in Timbuktu have almost all disappeared. And even Mali's best historians don't speak Arabic."

He plans to release a CD containing translations of exemplary texts in the near future, on peaceful solution of conflicts and good governance. "The Westerners come over here and try and tell us they invented it all."

The telephone rings and Haidara's eyes light up: a thousand books are on their way from Qatar, he says, as an academic reference library for studying the ancient manuscripts. And next week South Africans from Capetown University are coming for a symposium. There's plenty to do here at the end of the world.

Cultural Heritage Endangered in Mauritania
The Koran on Gazelle Skin
Secular and religious texts have been collected in private libraries in the caravan city of Chinguetti since the twelfth century. Now climate change and termites are threatening this valuable heritage. Marc Engelhardt reports from Mauritania

Refugees and Emigrants in Mali
The Dream of a Better Life
Many Malians try to escape gloomy prospects at home by fleeing to Europe. But Mali is also a transit county for refugees from other African countries. NGOs are now trying to advise the refugees, some with financial support from the EU. A reportage by Klaus Sieg

END_OF_DOCUMENT_TOKEN_TO_BE_REPLACED
Social media
and networks
Subscribe to our
newsletter