Many Obstacles to Overcome

Trial lessons are being held in many of Germany's Länder. But "Islamic Religion" is still not being provided as a standard part of the curriculum in Germany. By Lamya Kaddor 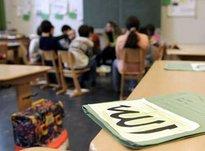 At present, the various Länder (except for Berlin) can only offer Islamic classes which exclude preaching of the faith and education in the faith

​​It is quite natural for Christian schoolchildren to have regular religious instruction at school, but it's not so easy for the 350,000 or so pupils – or 6 % of all children at school – of Muslim faith.

"Islamic Religion" is still not being provided as a standard part of the curriculum in Germany. Nevertheless, education experts stress the importance of the subject for shaping the identity of Muslims and for intercultural dialogue.

No single partner speaking on behalf of all Muslims

For more than twenty years, the various Länder governments have been endeavouring to introduce Islamic religious instruction. One major obstacle is the lack on the Islamic side of a single partner speaking on behalf of all Muslims in Germany.

The Länder find themselves having to deal with a large number of locally based (separate) representatives of the various umbrella organisations, and face corresponding difficulties in granting them legal recognition as the sole partners for their respective Länder. Brandenburg is one exception. The Islamic Federation in Berlin extended Islamic religious instruction to a total of 37 (elementary) schools in the 2004/05 school year.

Trial lessons have begun in several Länder, with the curricula being drawn up in more or less close co-operation with various representatives of Islam, although the Länder themselves bear sole responsibility for the content of the curricula.

In North-Rhine/Westphalia alone, 130 schools are participating in the "Islamic studies in German" trial. At present, more than 8000 pupils are being taught under the trial. A second trial is soon to be rolled out: "Islamic religious instruction" will be tried out at two locations in the state (Duisburg and Cologne) for an initial four years; if successful, the model is to be extended to include other cities.

In Lower Saxony, more than 20 schools are participating in the trial phase of "Islamic religious instruction", and in Bavaria a total of 22 schools are involved in two trials (trial phase "Islamic instruction" in Erlangen: one elementary school participating; three further elementary schools, Hauptschulen and Realschulen in Erlangen and Nuremberg are engaged in specific preparations for 2007).

And 21 schools are currently participating in the pilot project "Religious instruction of Turkish pupils" (in German).

At present, legal reasons mean that the various Länder (except for Berlin) can only offer Islamic classes which exclude preaching of the faith and education in the faith.

A Co-ordinating Council of the Muslims in Germany (consisting of the Central Council of Muslims in Germany, the Islamic Council for the Federal Republic of Germany, the Diyanet İşleri Türk İslam Birliği (Turkish-Islamic Union of the Institute for Religion) and the Association of Islamic Cultural Centres) was established in 2006, initially with a view to entering into negotiations with North-Rhine/Westphalia.

It is the stated aim of the various Länder governments to introduce Islamic religious instruction as a regular part of the curriculum in the long term.

One important step on the way towards regular Islamic religious instruction was the founding in 2001 of the "Centre for Religious Studies" (CRS) at the University of Münster. Since July 2004 Prof. Dr. Muhammad Kalisch has held the chair set up for the "religion of Islam" at the CRS.

The CRS is also offering a new Master's degree course in "Islamic theology" and thus trains future Islamic theologians able to work in various spheres in Germany (e.g. as imams, pastoral carers, etc.). The CRS also regards teaching of Islamic studies merely as a transitional model which must result in future in the introduction of regular Islamic religious instruction in line with Article 7 (3) of the Basic Law.

A professorial chair for "Islamic religious teaching" was established at Bayreuth University in March 2006. Dr. Harun Behr has been appointed professor. This extension course is intended to teach the following content: "Arabic, Qur'ān and the doctrine of Islam, history of selected Islamic cultural spheres, traditions of thought and law to the modern day, Islam in Europe and Germany, teaching of religion, and a field of religious sciences".

The professorial chair for "Islamic religious instruction" is part of the "Interdisciplinary Centre for Islamic Religious Teaching" run by the Faculties of Philosophy I and II, Law, Islamic Sciences and Educational Sciences.

A similar professorial chair is to be filled next year at Osnabrück University, in order to offer an extension course to train teachers in Islamic religious instruction there too. And since the summer semester of 2003, Frankfurt University has had a foundation professor for "Islamic Religion" attached to Protestant Theology and funded by the Turkish Presidency of Religious Affairs in Ankara.

Since the 2006/2007 winter semester, Prof. Dr. Ömer Öszoy has been the foundation professor. Prof. Dr. Tahsin Görgün is currently lecturing there as a guest professor. The course leads to a Master's degree and is intended to enable the students to work, for example, as imams in mosques or as teachers of Islamic religion at public schools.

The three professorial chairs now aim not only to offer theological studies but also a theoretical basis for Islamic religious instruction; however, this presupposes the existence of regular classes in Islamic religion so that the theories can be applied and tested. The relatively few schools participating in the trials are not sufficient for testing and further expanding a theory of religious teaching.

There are also aims to establish a further chair in Islamic Religious Teaching Theory at Osnabrück University in the 2007/2008 winter semester.

Translated from the German by Andrew Sims

Lamya Kaddor is the academic assistant at Germany's first university chair for the religion of Islam at the Centre for Religious Studies of the University of Münster. She is working as a teacher as part of North-Rhine/Westphalia's trial phase of "Islamic studies in German". Since the 2006/2007 school year, she has been offering further training on behalf of the Culture Ministry of Lower Saxony in the field of "Theory of Islamic Religious Instruction and Theology".

Islam Lessons at German Schools
"We Pretend You're a Church"
Because Germany's Muslims don't have a central institution to represent them, it is difficult to organise Islam lessons at German schools. One primary school has got round this problem with a clever trick, as Christiane Hawranek reports

Germany
Islam on the Curriculum
Until now, only Koran schools have offered lessons in the Islamic religion to Muslim children in Germany. Now, pilot programmes are to be carried out at German schools, too. Max Bönnemann reports.

END_OF_DOCUMENT_TOKEN_TO_BE_REPLACED
Social media
and networks
Subscribe to our
newsletter