Islam is enjoying increasing popularity in Kazakhstan. For many people this represents a return to Kazakh traditions, even if the impetus for the return to their roots has come from abroad. The Kazakh government continues however to promote religious freedom and diversity, and to protect itself against fundamentalist extremism. Edda Schlager reports 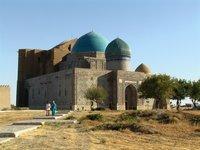 One of Kazakhstan's most important pilgrimage sites: the memorial mosque to Khoja Ahmed Jassauwi in Turkistan, south of Kazakhstan (all photos: Edda Schlager)

​​Friday afternoon in the main mosque, by the "green bazaar" in central Almaty, at two million inhabitants Kazakhstan's biggest city: hundreds of people stream inside as the imam calls them to prayer with a microphone. The large hall is already full; the men find places to kneel in narrow aisles and on the steps. Even the mosque courtyard is covered with prayer mats and shoes. Latecomers can barely find a place. A couple of young girls with high heels and short skirts on, their hair covered by a cloth, hurry into the women's prayer hall.

It is impossible to ignore; Islam is back in Kazakhstan. Seventeen years after the collapse of the Soviet Union and Kazakhstan's independence, Muslims, whether active or not, account for over two thirds of the country's population: Kazakhs, but also Usbeks, Uyghurs, Azerbaijanis, Kurds, Iranians and Turks.

"Kazakhstan is a Muslim state, but not Islamic," says Yershat Ongarov. "Religion and state are strictly separate in this country." Ongarov is the head of education department of the "spiritual committee for the Muslims of Kazakhstan" (DUMK), the national umbrella organisation for the country's Muslims. While at the start of independence there were only sixty-eight Mosques in Kazakhstan, there are now over 2,200, mostly built in the last few years. "Every month the figure rises, with an average of three new mosques," Ongarov says. "We have a deficit of Imams."

Support for education from abroad 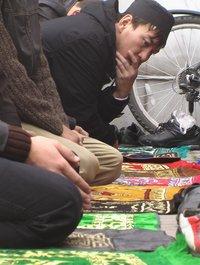 Islam's increasing popularity in Kazakhstan: Friday prayers at the central mosque in Almaty

​​For this reason the Nur-Mubarak University of Islamic Culture was founded in 2001, with financial assistance from the Egyptian government. It was the first university in Kazakhstan where imams could be trained. Up till then this had only been possible in other countries. Now there is a second college, run by the DUMK. "Even so we are unable to meet the demand for Imams in Kazakhstan fully," says Mahmoud Hegazi, rector of the Nur-Murbarak University.

The university has around 500 students, and does not see itself solely as a religious educational establishment; it is possible to take BA and MA degrees in Arabic literature, English, comparative Islam studies or to train as a teacher. The only religious subject taught at the university, Islam, does not lead to an official qualification. The Kazakh minister for education refused to accredit the course, pointing to Kazakhstan's secularist constitution.

Other Arab countries are involved with supporting Kazakhstan too. With the support of Arab foundations, the Kazakh-Arab and Kazakh-Kuwait Universities have been founded in Shymkent in the strongly Muslim south. The largest mosque in the country, in Astana the capital, was a present from the Emir of Qatar.

Yershat Ongarov from DUMK does not see it as a problem that the revival of Islam in Kazakhstan was helped by foreign Muslims who came to central Asia immediately following the collapse of the Soviet Union. "During the Soviet time the Kazakhs had forgotten the significance of Islam, even if they always knew that it was something which belonged in their lives." He finds it perfectly legitimate that they are now relearning Islam with the help of teachers from Saudi Arabia or Egypt.

One of Kazakhstan's over 2,200 newly built mosques, in Shetpe, west Kazakhstan

​​However the steady stream of Arab missionaries also brought fundamentalist groups to Kazakhstan. At the beginning of the 1990s there was even talk of establishing an independent Islamic state on the territory occupied by Kazakhstan, Kyrgyzstan, Uzbekistan and Tajikistan. Although this idea is no longer seriously being discussed, many experts say that the danger posed by religious extremism has increased in recent years.

The Kazakh anti-terrorist centre in Almaty (ZAP) has registered a growing number of cases where unconstitutional literature and incitements are being distributed. Last year alone, 167 members of the pan-Islamic Hizb ut-Tahrir al-Islami were imprisoned and charged. Al-Qaida, the Uzbek Islamic movement and the Islamic party of east Turkistan are also seen as terrorist organisations whose activities are forbidden in Kazakhstan because they contravene the constitution.

For most Kazakhs however Islam has nothing to do with fundamentalism. Nessip sees herself as a Muslim, but only goes to Mosque once a year at the most, for Eid al-Adha, the festival of sacrifice. She is in her mid fifties, was socialised in the Soviet Union and saw herself as an atheist for many years. As friends and relatives increasingly began to get involved with Islam, she too became interested:"I tried to read the Koran, in Russian, but then I shelved it again. I couldn't relate to all those regulations," Nessip says. She works for a tourist agency and her colleagues also see Islam more as a traditional aspect of their culture. "I have been observing Ramadan for three days," she says, "but I'm doing it more for my personal mental and bodily wellbeing." 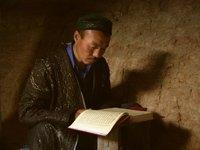 A guard at the Sultan-epe mosque studying the Koran. Even today there are mystic brotherhoods who are part of a history of Sufism in Kazakhstan

​​"Modern Kazakh Islam is very pragmatic," says Gulnar Nadirowa, head of Arabic literature at the oriental institute in Kazakhstan's national university, Al-Farabi. "For the Kazakhs, a people with religious roots in shamanism and Tengriism, Islam was never a dogmatic religion." The connection to their forebears has always played a greater role than the observance of rituals; this is part of Kazakh culture and did not disappear under Soviet rule.

Where then has this new desire to belong to a religion come from? "For many Kazakhs the collapse of the Soviet Union represented the loss of many years of societal certainty. The vacuum opened up by the absence of ideological organisations such as the Komsomol, was filled again by Islam," says Nadirowa. Even now they are still in a transitional phase, which is why people are looking for any kind of certainty they can find. "For many Kazakhs Islam offers this."

Unlike in the other, much more strongly Muslim central Asian republics, in Kazakhstan all religions are experiencing a renaissance, and are supported by the state. Around twenty percent of the Kazakh population are still Russian, and the Russian Orthodox Church has grown again. The Jewish community has also experienced a new feeling of cohesion and two years ago Kazakhstan's largest synagogue was built in Astana. Russian Orthodox and Muslim festivals are both celebrated as public holidays.

An identity emancipated from Russia 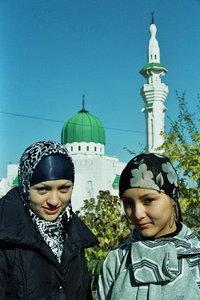 ​​Above all it is young Kazakhs, who know their country only as an independent state, for whom Islam seems to offer help in the search for their own, Kazakh, identity, emancipated from Russia. "They want to be Kazakh, Muslim and modern," as Mahmoud Heegazi from the Nur-Mubarak university puts it.

For Ilmira and Nargisa, both seventeen, it was a surprise when a few years ago Ilmira's brother and Nargisa's father began to go to the mosque regularly. Today however Islam is a firmly established part of their lives, as can clearly be seen; both wear a veil and saying the "Namaz" prayer is now a secure ritual.

The girls are studying Islam at the Nur-Mubarak University. Nargisa wants to continue her studies in Egypt, Ilmira wants to go on to study law. "I'm doing this course now just for myself," Ilmira says. "I want to work as a lawyer, if my future husband allows it." As she doesn't know what her husband, who should be a good Muslim, will prefer, her studies are prophylactic, as it were. "I want to keep all options open."

Analysis F. Stephen Larrabee
Central Asia's Other Turkmenbashis
A dictator's sudden death almost always triggers political instability. But it is doubly dangerous when it poses a risk of region-wide destabilization and a scramble for influence among the world's greatest military powers - the US, Russia, and China, F. Stephen Larrabee argues

The OSCE and Central Asia
A Region of Dictatorships
Central Asia is dominated by despotism and corruption. The Organisation for Security and Cooperation in Europe (OSCE) has missed its historic chance to improve the situation in the region, argues Marcus Bensmann

END_OF_DOCUMENT_TOKEN_TO_BE_REPLACED
Social media
and networks
Subscribe to our
newsletter