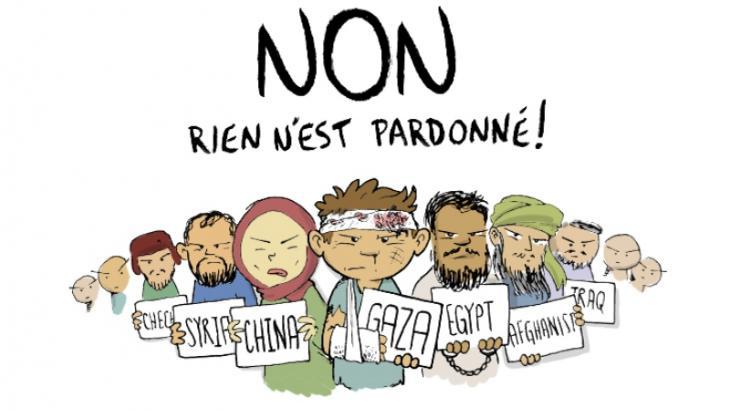 "No, nothing has been forgiven!"

The Islamic satirical magazine "Cafcaf" has distanced itself from the worldwide "Je suis Charlie" movement. The magazine's Turkish caricaturists regard their own art as being respectful towards Islam and criticise the portrayal of their religion in the West. By Senada Sokollu in Istanbul

"Non. Rien n'est pardonné." This is the answer of the Islamic satirical magazine "Cafcaf" to the latest edition of "Charlie Hebdo". Translated into English, the caption reads, "No, nothing has been forgiven!" The caricature features citizens of Chechnya, Syria, China, Palestine, Egypt, Afghanistan, and Iraq, each holding a sign in their hands indicating their respective country. Emre Bilgic, the artist behind the cartoon, says that he felt a duty to respond in this manner. "After the terrorist attack on 'Charlie Hebdo' and as an artist who believes in Islam, I felt very much under pressure," Bilgic explained to Qantara.de.

According to the 26-year-old artist, the "Je suis Charlie" movement of caricaturists all over the world has portrayed him and his Muslim brothers and sisters as being diabolical. "Yet, no one was displaying the diabolical way in which 'Charlie Hebdo' deals with certain subjects – we Muslims, our religion, and the tragedies in our home countries," says Bilgic.

He read earlier editions of Charlie Hebdo in which caricatures were used to make fun of the hundreds of Muslims who had been murdered in Egypt as well as jokes about the rape of Bosnian women, explains the Turkish caricaturist. "With my drawing, I wanted to say that regardless of how hard you attempt to portray us as devils, we know who really has blood on their hands. We have been watching it happen for years and we have forgiven nothing," says Bilgic.

"Cafcaf", which roughly translates as "the glorious", was founded eight years ago. The magazine regards itself as close to the ruling Islamic conservative AKP. Even the advisor to the former Turkish President Abdullah Gul has written for the magazine in the past. Its office is located in the conservative Istanbul district of Fatih. 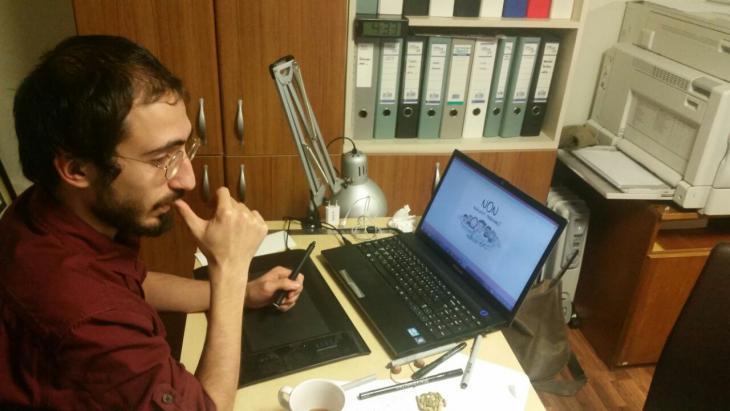 "Cafcaf" cartoonist Emre Bilgic: "After the terrorist attack on 'Charlie Hebdo' and as an artist who believes in Islam, I felt very much under pressure"

A staff of 40 works at the magazine – all on a voluntary basis. "Cafcaf" is published once a month with a run of 25,000 copies. The magazine claims to be the only Islamic satirical magazine in the world. Yet, how is it possible to draw in an "Islamically correct" manner?

Of course, there is humour in Islam, says Faruk Gunindi, editor-in-chief of "Cafcaf". "But there are also certain rules, values and virtues that we as Muslims must obey. In accordance with these precepts, we should protect human dignity, not abuse or insult it," explains Gunindi.

Muslims, he continues, believe first and foremost that the Prophet Muhammad is the most dignified of all human beings. "We should therefore make no jokes either at his expense or with reference to his appearance," says the editor-in-chief. A further important rule, he explains, is not to spread lies. "Therefore, all jokes or drawings that we publish have to be based in truth," claims Gunindi.

Over the course of human history, there have always been a number of Muslims who have drawn the Prophet Muhammad, says Asim Gultekin, the founder of "Cafcaf". "In Islam, however, there exist traditional manuscripts, the so-called 'Hilye-i Sadet,' which means 'the Appearance of the Messenger of Allah.'"

"These manuscripts describe Muhammad's appearance in detail – his eyes, nose, mouth and even his gait," explains Gultekin. A devout Muslim will nevertheless not portray the Prophet. "One could at least expect from Western culture that its caricaturists would first have a look at these documents. They should read how his appearance is described. It would at least be a sign of respect. It is thoroughly possible to draw a faithful image of the Prophet. Caricatures of Obama look like Obama and those of Jesus conform to his traditional image, says Gultekin. "Why isn't this the case for the Prophet Muhammad?" says the devout Muslim.

"Cafcaf" makes a conscious effort to distance itself from other Turkish satirical magazines, such as "Leman", "Penguen", and "Uykusuz", which strongly criticise the Turkish government and, in contrast to "Cafcaf", have expressed solidarity with "Charlie Hebdo".

"Our moral convictions are different. Our lifestyle is different. The other Turkish satirical magazines are socialist. In Turkey, socialism is a form of Westernisation, a modernisation. Although it is against capitalism, it accepts capitalism in Europe and other Western states. We do not represent this sort of modernisation," claims Gultekin. He says that "Cafcaf" does not make fun of any particular individuals or groups. "We criticise Erdogan when it is appropriate, or the opposition and even our fellow Muslim citizens. Nevertheless, we don't have any hard-and-fast rules," he explains.

More to fear from the Turkish government than from terrorists? 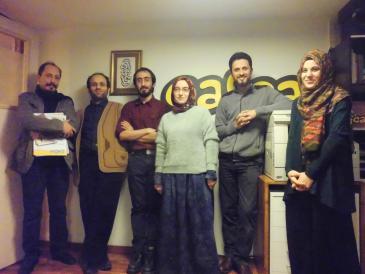 "Cafcaf" was founded eight years ago. It sees itself as close to the ruling Islamic conservative AKP

Turkish Prime Minister Ahmet Davutoglu also took part in the memorial march for the victims of the terrorist attacks in Paris on 11 January, which took place under the banner of freedom of the press and against terrorism. Yet, in Turkey, caricaturists and journalists critical of the government have more to fear from the authorities than from terrorism.

In recent days, caricaturists working for "Leman", "Penguen", or "Uykusuz" have not given any interviews on the "Charlie Hebdo" attack; it could prove detrimental to the magazines, is the response. Nonetheless, they have expressed solidarity with "Charlie Hebdo". The headline "Je suis Charlie" was printed on their front pages in answer to the attack.

In a joint statement issued immediately after the attack, the magazines said, "We hope that this solidarity will provide some degree of solace. We condemn the terrorists who killed the caricaturists. We desire a peaceful world, in which freedom of expression is not suppressed and where the media is not attacked."

Even the "Cumhuriyet" newspaper expressed its solidarity last week and published some caricatures from Charlie Hebdo. The Turkish police, however, responded to the publication with a raid to ensure that no Muhammad caricatures were printed.

Senada Sokollu
© Qantara.de 2015
Translated from the German by John Bergeron

Home
Print
Newsletter
More on this topic
Interview with the cartoonist Khalil: "There is nothing that can justify this sort of violence"The Lebanese satirical magazine "Ad-Dabbour": Hornets' nest in BeirutCreative protest against Syria's regime: The puppet rebellionPortrait of the Egyptian TV satirist Bassem Youssef: Fighting over the ''Pantie Revolution''
Related Topics
Cartoons, Charlie Hebdo, Freedom of the press, Islamic lifestyle, Islamophobia, Justice and Development party (Turkey), Media in Turkey, Muslims in the West, Recep Tayyip Erdogan, Satire
All Topics

German Middle East analyst Guido Steinberg and television journalist Ulrich Tilgner have both published new books on the conflicts in the Middle East. Their analyses and their ... END_OF_DOCUMENT_TOKEN_TO_BE_REPLACED

On 7 March, Switzerland became the latest European country to vote in favour of a so-called "burka" ban. It was yet another feather in the cap of the right-wing populist Swiss ... END_OF_DOCUMENT_TOKEN_TO_BE_REPLACED

In Grenoble, France, two professors have been pilloried in a dispute over the use – or otherwise – of the term Islamophobia. Is freedom of speech in jeopardy? By Stefan Dege and ... END_OF_DOCUMENT_TOKEN_TO_BE_REPLACED

In his controversial book published in 2020, French author Pascal Bruckner describes anti-Muslim sentiment as a fiction, claiming that the term "Islamophobia" is being used to ... END_OF_DOCUMENT_TOKEN_TO_BE_REPLACED

Several media reports in recent weeks have focused on the potential threat presented by Islamist groups in Germany. The discourse is fraught with generalisations, both sides ... END_OF_DOCUMENT_TOKEN_TO_BE_REPLACED

END_OF_DOCUMENT_TOKEN_TO_BE_REPLACED
Social media
and networks
Subscribe to our
newsletter