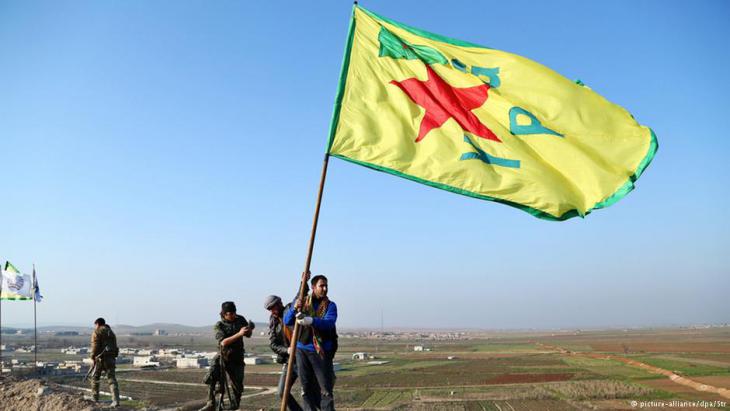 A year of territorial losses

Although 2015 has been a bleak year, characterised by numerous casualties resulting from the terrorist activities of IS, the last twelve months have seen Islamic State relinquish rather than gain ground. By Chase Winters

The "Islamic State" (IS) has lost 14 percent of the territory it held at the start of the year, suggesting the group may have overstretched itself. By contrast, the Syrian Kurds have increased the amount of territory under their control by 186 percent.

The IS "caliphate" in Syria and Iraq has suffered a series of battlefield defeats over the past year, thus reducing the territory under its control, revealed military and defence think-tank IHS Janes in a report released on Monday. While IS made gains in both the historic Syrian city of Palmyra and Ramadi, the capital of Iraq's Anbar province, these gains came at the expense of losing large swathes of territory in northern Syria to the US-backed Syrian Kurds and allied Arab forces, known at the Syrian Democratic Forces.

In order to take and hold Palmyra and Ramadi, IS was forced to redeploy fighters from the Kurdish front, IHS said. "This indicates that the Islamic State was overstretched. It also shows that holding Kurdish territory is considered to be of lesser importance than expelling the Syrian and Iraqi governments from traditionally Sunni lands,″ said Columb Strack, senior Middle East analyst at IHS. "The Kurds appear to be primarily an obstruction to the Islamic State, rather than an objective in themselves,″ he added.

Losses in the north along the border with Turkey included the strategic border town of Tal Abyad after Syrian Kurds went on the offensive with US air support following the failed IS siege of Kobani. Syrian Kurdish gains have effectively cut IS off from a large section of the Turkish border it once controlled, dealing a blow to the group's financing and supply lines to its self-declared capital Raqqa.

"Prior to the recent intensification of airstrikes against the group's oil production capacity, we had already seen a negative financial impact on the Islamic State due to the loss of control of the Tal Abyad border crossing," said Strack.

In Iraq, the militant Sunni group also lost Tikrit, the Baiji refinery and the main road between Raqqa and Mosul during an Iraqi Kurdish offensive to retake Sinjar. Territory around Ramadi, where an Iraqi Army and Shia militia offensive is underway, has also been recovered.

US-led coalition airstrikes backed up by indigenous ground forces have also helped to push back IS.

Since Russia's military intervention in Syria in late September, regime forces have clawed back some territory, but on the whole the government has lost 16 percent of the territory it controlled at the beginning of the year.

The Iraqi government, on the other hand, has increased territory under its sway by 6 percent, while the Iraqi Kurds have registered a net gain of 2 percent.

Syrian Sunni rebels, pinched between the regime and IS advances in parts of central and western Syria, have made marginal gains of 1 percent this year.

Reading Hassan Blasim's God 99 is an immersive experience of grief and exaltation, anger and disgust, writes Marcia Lynx Qualey. We join the Iraqi narrator as he sits around in ... END_OF_DOCUMENT_TOKEN_TO_BE_REPLACED

By stage-managing his re-election in a poll widely dismissed as a farce, Syria's President Bashar al-Assad has killed two birds with one stone: he has forced his compatriots to ... END_OF_DOCUMENT_TOKEN_TO_BE_REPLACED

In his book "Ground Zero: 9/11 und die Geburt der Gegenwart" (Ground Zero: 9/11 and the Birth of the Present) Islamic scholar Stefan Weidner analyses the consequences of the ... END_OF_DOCUMENT_TOKEN_TO_BE_REPLACED

The rollout of coronavirus vaccines in the Middle East and North Africa is already taking place on a massive scale, with the United Arab Emirates leading the way. Nevertheless, ... END_OF_DOCUMENT_TOKEN_TO_BE_REPLACED

German Middle East analyst Guido Steinberg and television journalist Ulrich Tilgner have both published new books on the conflicts in the Middle East. Their analyses and their ... END_OF_DOCUMENT_TOKEN_TO_BE_REPLACED

END_OF_DOCUMENT_TOKEN_TO_BE_REPLACED
Social media
and networks
Subscribe to our
newsletter