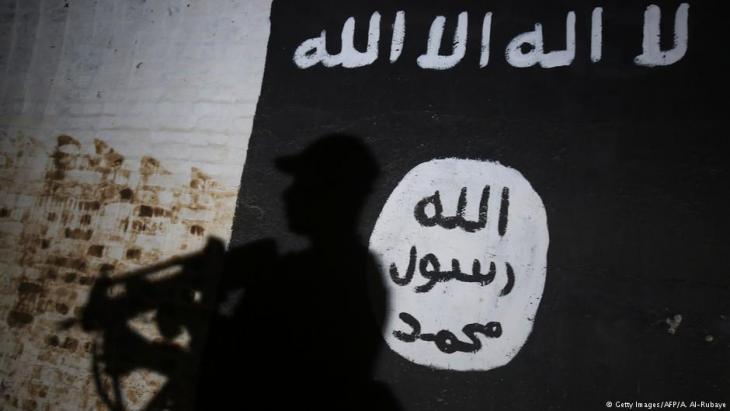 Kurdish peshmerga in Iraq say that IS is rising like a phoenix from the ashes. The organisation is re-grouping to fill the void left by its quarrelling adversaries. Judit Neurink reports from Irbil and Mosul

A car bomb kills five in the Iraqi town of Tikrit. Iraqi troops call in air strikes on "Islamic State" (IS) tunnels in the Badush mountains. Four people are killed in the first deadly bombing in western Mosul since the city was liberated over a year ago. Meanwhile, Iraqi security forces say they have arrested 52 terror suspects in Mosul, including senior IS members. Three IS hideouts are destroyed and 10 militants are killed in Iraqi airstrikes on Diyala and Salahuddin provinces.

These are just a few examples of recent attacks carried out by or against the group. The declaration that IS was totally defeated in Iraq made by then Iraqi Prime Minister Abadi in December 2017 "was a lie," says Kurdish Major General Aziz Weysi Bani of the Zeravani forces.

These Kurdish special forces played an important role in the battle in Iraq against IS, which cost over 1,800 Kurdish fighters their lives. The Kurds teamed up with the Iraqi army and Shia militias on the ground, with the international coalition forces providing air cover and training.

Now Weysi is raising the alarm: IS is still a major threat, even more so because the world mistakenly thinks the group has been destroyed in Iraq and will soon be finished in Syria too. "Nobody understands the threat better than we do," he explained, citing experience and trustworthy intelligence.

In his headquarters in a corner of the airport in Kurdistan's capital Irbil, Weysi points out that IS – or Daesh as locals call it – thrived on the political conflicts inside Iraq and continues to do so. 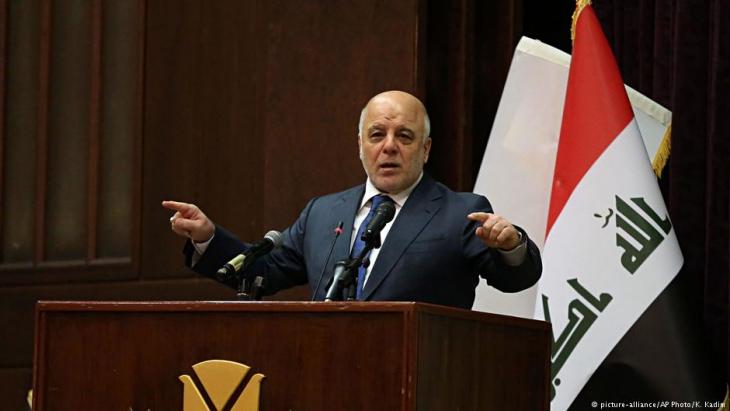 Lip service, nothing more: on 9 December 2017 Iraqi Prime Minister Haider al-Abadi announced victory over IS. But the threat of a jihadist resurgence is far from over. On the contrary, fear of jihadists is growing among the population, especially in Mosul. The megacity was occupied by the terrorist group for three long years

Iraq's disillusioned Sunni minority feels let down by the Iraqi government, which is offering very little help in rebuilding their cities. After the initial euphoria that followed liberation, they are now dissatisfied with the Shia Hashd al-Shaabi militias that guard their areas, with kidnapping, extortion and insecurity part of their lives once more.

When the Iraqi army seized the disputed areas claimed by both Baghdad and the Kurds, but long under Kurdish control, in October 2017, Shia militias were put in charge of securing the territories.

"We don't trust them and they don't trust us enough to focus on Daesh," the general says about the militias. "And Daesh is exploiting the space, the vacuum. They have many tunnels to hide in, as there are many places the Iraqi army does not control and has never even visited."

In his office, Weysi elaborates on what a group like IS needs to survive: money, ideology, executives and leadership. Money, the group earned from oil sales.

The ideology is also still there among conservative Sunnis, he says. Many foreigners and former Iraqi military and intelligence officers are still fighting with the group in their last pockets in Syria, and IS leader Abu Bakr al-Baghdadi has still not been found. "There still are some 3,000 IS soldiers left. Many will come from Syria to Iraq when they lose ground there. In 2014, they only needed 500 men to take Mosul."

Mosul paying the price for IS rule

Fear is also spreading among Mosul's population, many of whom survived three years of occupation by the terror group. While they were thankful when the Iraqi military liberated their city, they no longer feel that the army and Shia Hashd al-Shaabi militias are guaranteeing their safety. A Mosul policeman admitted anonymously that his colleagues know there are still IS activists in the city, but without complaints or proof of affiliation, they can do nothing. 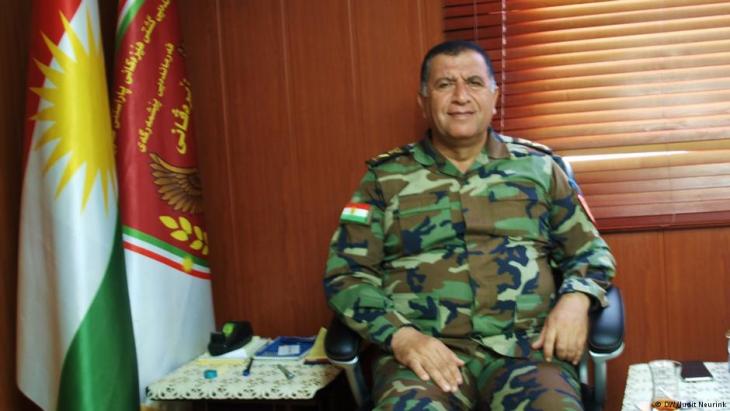 "Nobody understands the threat better than we do": at his headquarters in Erbil, General Aziz Weysi Bani of the Peschmerga gendarmerie warns against underestimating the power of the IS. For the military, the rise of IS, which everyone in the region calls "Daesh", is the result of deep-seated political conflicts in Iraq. The terrorist militia continues to benefit from the political situation in the country, he says

The fear heightened when a bomb exploded near the popular Abu Layla restaurant in western Mosul in early November, killing four and wounding 11. "Daesh is trying to show us they are here," says Major General Jasim Mohammed, the second-in-command of the Nineveh Operations Command that co-ordinates the military forces in the Mosul area. "Because we killed 15 of them a couple of days earlier."

But he does not think the bomb proves IS is a real threat. "In Mosul, Daesh is over. All that's left of them are a few sleeper cells we are trying to root out," he asserted.

Most importantly, he says, IS can no longer count on the support of the people in Mosul, who helped them take over the city in 2014. "People had the worst three years of their lives. They will never do the same thing again. Many people provide us with information now. Daesh is just trying to scare them."

"Mosul is the prize"

Mosul, however, which was the capital of their self-proclaimed caliphate, is still important for the group. Outside the command centre, which was formerly a palace of Iraq's dictator Saddam Hussein, Mohammed's superior, Major General Najim al-Jobori, is waiting for a convoy to take him into the city. "I told you before, Mosul is the prize. They will want it back," he admitted. At the same time, he tries to convince the civilians they are safe by joining them in markets, on the streets and – today – at a funeral.

Kurdish peshmerga leaders are also warning that IS is back and international observers say the group still poses a global threat. They may be weakened, General Weysi admits, but "[the group] is getting stronger again, learning from its mistakes and coming back with different tactics."

Ever since the liberation of Mosul, there have been warnings that IS 2.0 could rise from the ashes of its pre-incarnation. But the Iraqi government is in denial, Weysi says. "They cannot lose face. And they continue to deny the evidence because they want to get rid of the Americans."

He says that the Kurds are ready to fight the Shia militias over the territories, but would prefer to focus on IS. To that end he's calling on the European Union to step in and help reunite the anti-IS forces.

"I hope Europe will listen, because it is more of a target for Daesh than the United States. And Daesh is patient. They choose their battles. They might stay inactive in Europe for a while, but once they are back in force here, they will be back in Europe too."

The recent escalation of violence in Idlib is also a result of the increasing tensions between Turkey and Russia. The victims are those in Idlib, caught up in a hopeless situation ... END_OF_DOCUMENT_TOKEN_TO_BE_REPLACED

The 2015 Joint Comprehensive Plan of Action with Iran is in jeopardy. European governments should use the JCPOA’s dispute-resolution mechanism both to pursue immediate measures to ... END_OF_DOCUMENT_TOKEN_TO_BE_REPLACED

Many predominantly Muslim countries have penal laws against "blasphemy", "defamation of religion" and "apostasy". In practice they serve as highly effective weapons to settle ... END_OF_DOCUMENT_TOKEN_TO_BE_REPLACED

These days you might be forgiven for wondering whether international relations would be better served by artists than politicians. Iranian Kayhan Kalhor, a bridge builder from the ... END_OF_DOCUMENT_TOKEN_TO_BE_REPLACED

As we digest the details of Donald Trump's Vision for Peace, we need to ask ourselves just one question: does this draft guarantee an Israeli and a Palestinian baby born today ... END_OF_DOCUMENT_TOKEN_TO_BE_REPLACED

As expected the Trump administration released its Israeli-Palestinian peace blueprint on Tuesday, a plan that ignores the Palestinians at the expense of lasting peace. Middle East ... END_OF_DOCUMENT_TOKEN_TO_BE_REPLACED
Author:
Judit Neurink
Date:
Mail:
Send via mail

END_OF_DOCUMENT_TOKEN_TO_BE_REPLACED
Social media
and networks
Subscribe to our
newsletter