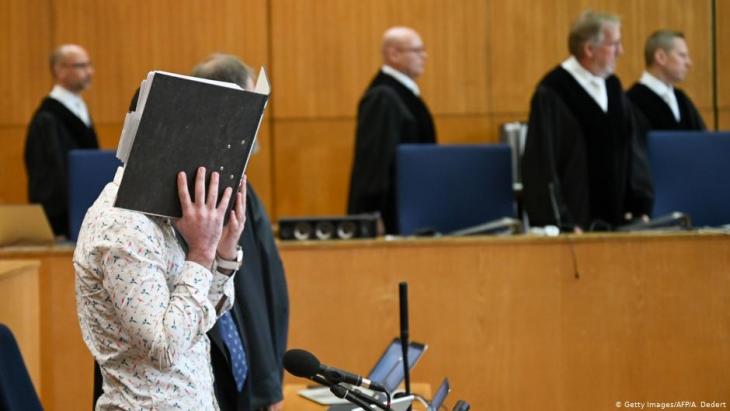 An increasing number of Islamic State returnees are standing trial in Germany, including female supporters of the terror group. To make their case, federal prosecutors are relying on international criminal law. By Matthias von Hein

Taha A.-J.*, an Iraqi man believed to have belonged to Islamic State (IS), has been standing trial in Frankfurt since late April on charges of genocide, war crimes and crimes against humanity. At the centre of his trial is the death of a 5-year-old girl belonging to the Yazidi minority group.

The charges are based on statements by his wife, Jennifer W.*, a staunch IS supporter who lived with him in the Iraqi city of Fallujah. In 2018, she told a police informant that during her first stay in IS territory in 2015 she saw Taha A.-J. punish the girl, purchased as a slave, for wetting the bed. Jennifer W. alleged that he had chained the girl to a window in the scorching sun, where she died an agonising death.

Jennifer W. has been on trial herself since April 2019, as she did nothing to save the girl. In that case, the girl's mother – also a slave in the same household – testified that she was forced to watch her daughter die.

Taha A.-J. was arrested in Greece in May 2019 under a German arrest warrant and was transferred to Germany in October. His ongoing trial – the first against a former IS militant to deal with the IS genocide of the Yazidi – has attracted international attention.

Genocide is the most serious crime under international criminal law. But according to Alexander Schwarz, a Leipzig-based lawyer who specialises in the area, "the difficulty lies in proving that the individual perpetrators were actually determined to destroy an entire ethnic group." 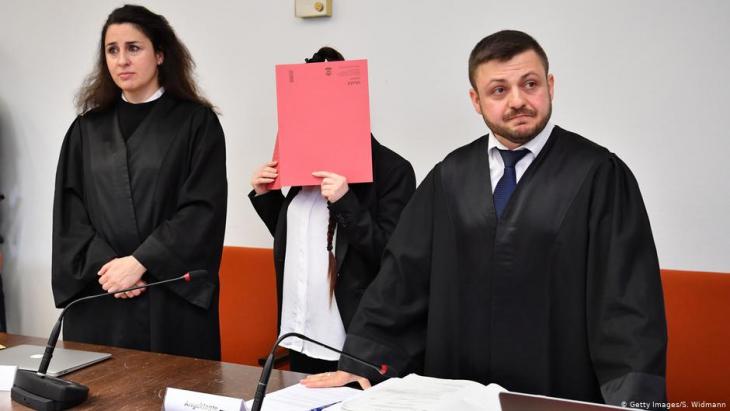 The witness who didn’t intervene: Jennifer W.*, a staunch IS supporter and wife of Taha A.-J.*, told a police informant in 2018 that during her first stay in IS territory in 2015 she saw her husband punish the girl, purchased as a slave, for wetting the bed. Jennifer W. alleged he had chained the girl to a window in the scorching sun, where she died an agonising death. Having made no attempt to save the girl, Jennifer W. has herself been on trial since April 2019

You may also like: Pursuing prosecution in Germany – Justice for Yazidi survivors of Islamic State genocide

Schwarz admitted that Taha A.-J.'s trial is unprecedented. "For the first time, the Federal Public Prosecutor's Office is pursuing a purely international offence," he said, pointing out that the alleged act was not committed in Germany, that neither perpetrators nor victims are German citizens, and that the accused wasn't even on German territory at the time of his arrest.

International criminal law is becoming an increasingly important part of the work done by the Federal Public Prosecutor's Office. When the trial of the 35-year-old IS returnee Omaima A.* began in Hamburg on 4 May, charges against her also included crimes against humanity. Omaima A., the widow of IS jihadist Denis Cuspert, who was killed in Syria in 2018, is also said to have kept a 13-year-old Yazidi girl as a slave.

After Omaima A. returned from the Syrian war zone in 2016, she lived a peaceful life in her hometown of Hamburg for three years. It wasn't until investigative journalist Jenan Moussa, reporting for Arab television network Al-Aan TV, uncovered the necessary evidence against her that charges could be filed.

Algeria‘s regime is again cracking down on anti-fracking activists and the unemployed in the country‘s south. Yet EU countries remain keen to scale up their energy cooperation ... END_OF_DOCUMENT_TOKEN_TO_BE_REPLACED

Bachtyar Ali sends the hero of his latest novel – "Mein Onkel den der Wind mitnahm" – literally flying. Jamshid is so thin after his years as a political prisoner that a gust of ... END_OF_DOCUMENT_TOKEN_TO_BE_REPLACED

For a century, the Kurds and other minorities in Turkey have been subject to state repression. With his dissertation "The Kurdish Question in Turkey", political analyst Ismail ... END_OF_DOCUMENT_TOKEN_TO_BE_REPLACED

Anti-Semitic motifs have no place at Germany’s documenta art show or anywhere else in the world, stresses Meron Mendel, director of the Anne Frank Educational Centre in Frankfurt ... END_OF_DOCUMENT_TOKEN_TO_BE_REPLACED

A new exhibition, "Syria – Against Forgetting", at Cologne’s Rautenstrauch-Joest-Museum focuses on Syria's artistic and cultural heritage and pays tribute to the country before ... END_OF_DOCUMENT_TOKEN_TO_BE_REPLACED
Author:
Matthias von Hein
Date:
Mail:
Send via mail

END_OF_DOCUMENT_TOKEN_TO_BE_REPLACED
Social media
and networks
Subscribe to our
newsletter