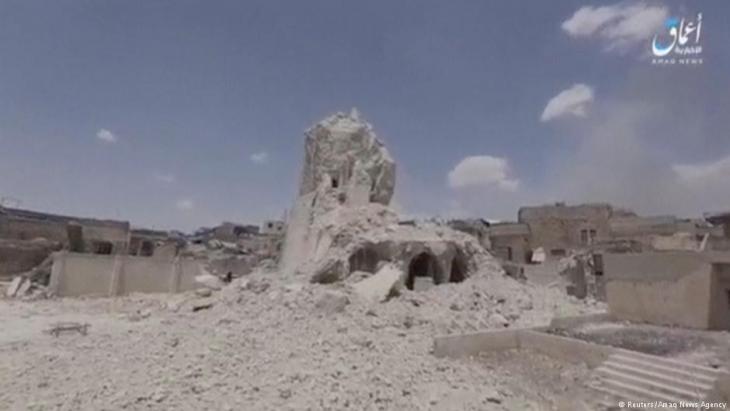 Islamic State′s destruction of Mosul
Razed to the ground

Islamic State recently blew up Mosul′s landmark Al-Nuri mosque. The extent of the damage is only likely to be fully revealed when the jihadists are finally driven out of the city. By Joseph Croitoru

The wave of destruction initiated by IS operatives in Mosul rolls on. Even in eastern areas of the city already liberated by coalition forces, an overview of the damage has yet to be established. In the ongoing offensive against Islamic State in western Mosul, the stakes have been raised yet again: on 21 June, coming under increasing pressure from the military, the jihadists blew up Mosul′s mediaeval Al-Nuri mosque – famous for its leaning minaret. It was there that IS leader al-Baghdadi proclaimed the jihadists′ ″caliphate″ in 2014.

The mosque was named for the Turkish Sunni ruler Nur ad Din Zengi (1118–1174), who commissioned its construction after he captured the city in 1170. Ad Din was a strong advocate of jihad. Not only did he fight fiercely to halt the advance of the Crusaders, he also had a series of mosques and madrassas built, with the aim of reminding Muslims of their sacred duty to fight in the Holy Way against the infidels, which explains its special symbolic significance to Islamic State.

Al-Nuri mosque: a symbol of jihad

Few realise however that the mosque was almost completely demolished seventy years ago and rebuilt using some of the ancient materials. During these renovations, the famous leaning minaret, which was recently destroyed by IS, remained untouched.

IS has blamed the Americans for the destruction of the mosque, however it seems more than likely that the terror group was responsible for the explosion: the devices positioned on the building were no doubt intended to hit coalition forces – a tactic frequently employed by the jihadists when in retreat. 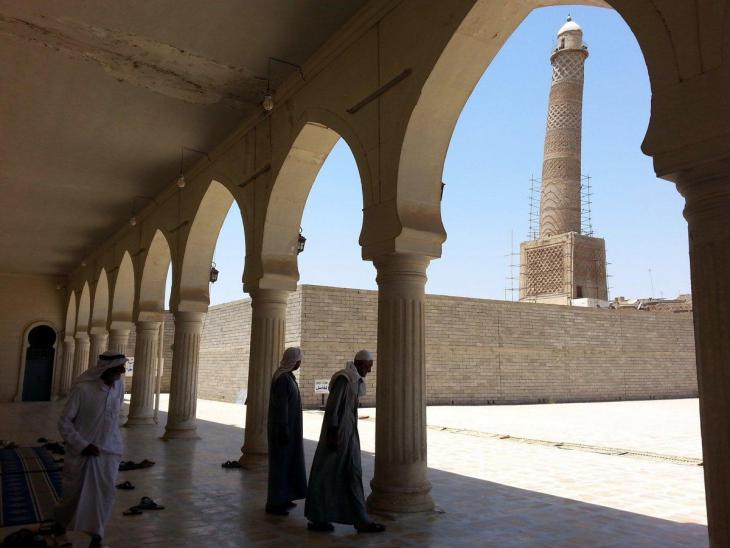 Of major symbolic importance to the IS caliphate: at the beginning of July 2014, Abu Bakr al-Baghdadi appeared in public for the first time to preach during Friday prayers in the centuries-old mosque. The Al-Nuri Mosque dates back to the 12th century; it was named for Nur ad Din Zengi, the ruler who commissioned its construction. The mosque was famous for its leaning minaret, which was in danger of collapsing. It was also known as ″Al-Hadba″ (″The Bent ″) or ″The Leaning Tower of Mosul″. Its lean was attributed to unsuitable building materials and wind speed

Even before the start of the liberation offensive last October, it was estimated that the jihadists had destroyed around a hundred mosques and Islamic burial sites – around half of them within Mosul city limits. Researchers with the "Monuments of Mosul in Danger" documentary project, launched in 2014 by the Oriental Institute of the Czech Academy of Sciences in Prague, have found that most of the destruction is focused in the western half of the city. The total of ruined architectural monuments currently numbers 47 – for the most part sacred buildings, including several churches and monasteries.

In the Islamic sector, it is primarily Shia mosques, mausoleums and madrassas that have fallen victim to vandalism by the radical Sunni Islamists since summer 2014. But the burial sites of revered Sunni personalities soon followed; the Wahhabist-influenced terrorist militia suspected the veneration of saints, which they find abhorrent. One of the largest and most impressive monuments was the mosque complex in the eastern part of the city named after the prophet Jonah (Nabi Yunus); following the huge explosions caused by IS there in 2014, only remnants of the walls remain.

The architectural origins of the complex go right back to the Assyrian era: what is now the north-eastern part of Mosul was once the Assyrian city of Nineveh, which boomed in the seventh century BC as the capital of the Neo-Assyrian empire under King Sennacherib. In its large grounds, which over time were built on and are now partly used for agriculture, there are several burial sites containing well-researched remains of Assyrian architecture, including the palace and temple in Tel Kouyunjik. This is where, in the mid-19th century, the famous stone-tablet library of King Ashurbanipal was discovered, which includes the Gilgamesh epic. 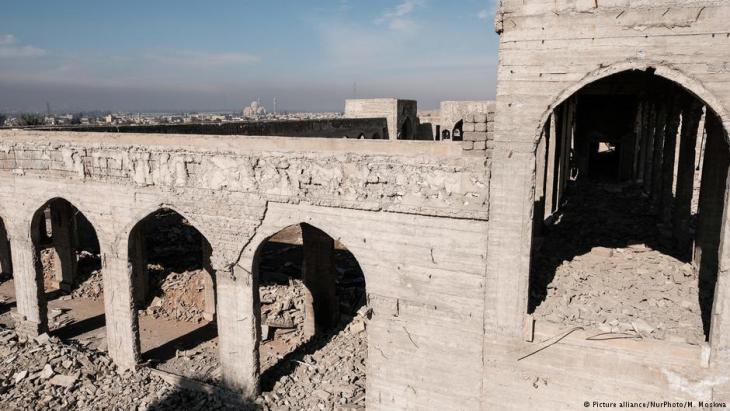 Indiscriminate terror: IS fighters in Mosul practised an uncompromising interpretation of Sharia. They burnt thousands of books and rare manuscripts. They also destroyed thousands of statues, blowing up the Nabi Yunus shrine in eastern Mosul in 2014 – venerated by Muslims and Christians alike as the last resting place of the prophet Jonah

The Islamists do not seem to have attacked the ancient ruins of Nineveh, though they did target the modern reconstruction of the monumental western city gate (the "Mashki Gate"), which they flattened with bulldozers. A winged gatekeeper statue (lamassu), which stood at the northern "Nergal Gate" was removed by IS and transported elsewhere. The jihadists, well-versed in the theft of antiquities, may well have known that the Nabi Yunus complex and its surroundings in the largely built-over southern half of the Nineveh site might still conceal Assyrian treasures. In fact, after blowing up the mosque complex, the Islamists got to work there digging several tunnels, which were only discovered by Iraqi soldiers in February, after the city was partially liberated.

The finds have caused a stir, not just among Iraqi archaeologists, but among Assyriologists worldwide. The Dutch archaeologist David Kertai, an expert on Assyrian architecture, says that the artefacts discovered there, including stone reliefs and a monumental Lamassu, are not easy to classify. In his view, they support the old assumption that an Assyrian palace existed beneath the Nabi Yunus mosque. But the stone tablets discovered there, with an inscription by King Esarhaddon, are not proof that the palace belonged to him. Kertai says there is some evidence to suggest that building components from various periods had been cobbled together in the exposed site – in the photos that have been circulated so far, one of the reliefs of human figures is even standing upside down.

It is still unclear what will happen to the archaeological finds and the ruins of the mosque, which are in danger of collapse. If the head of the Iraqi parliament′s cultural affairs committee Maysoon al-Damluji, who recently visited the city, has his way, the ruins will be preserved for the time being, and the Assyrian treasures discovered there taken to the Iraqi national museum in Baghdad.

The future of the Museum of Mosul, which was completely plundered and partially destroyed by fire, is also in doubt. According to the Munich archaeologist Simone Muhl, plans for a possible restoration are currently being discussed by a commission from the Iraqi antiquities authority.

Any reconciliation between Turkey and Syria’s Assad regime would have disastrous consequences for many Syrians, explains Syria expert Kristin Helberg END_OF_DOCUMENT_TOKEN_TO_BE_REPLACED

Iraq bears the scars of decades of conflict and has seen its antiquities plundered, yet the House of Manuscripts' collection has managed to survive END_OF_DOCUMENT_TOKEN_TO_BE_REPLACED

As Syrian camps housing families of Islamic State fighters get more dangerous, there are calls to bring children out, even if the mothers don't want to go. The idea of separating ... END_OF_DOCUMENT_TOKEN_TO_BE_REPLACED

Morocco has taken the 2022 World Cup by storm, with the northwest Africans reaching the semi-finals for the first time in their soccer history. As the knockout match approaches, ... END_OF_DOCUMENT_TOKEN_TO_BE_REPLACED

The Islamic Republic has been unable to quell the civil unrest that erupted three months ago, after Mahsa Amini died after being detained for violating hijab rules. Now the ... END_OF_DOCUMENT_TOKEN_TO_BE_REPLACED

The Kurds are under attack from two sides: from Turkey, and from Iran. The situation in their territories in northern Iraq is becoming increasingly desperate. Birgit Svensson ... END_OF_DOCUMENT_TOKEN_TO_BE_REPLACED
Author:
Joseph Croitoru
Date:
Mail:
Send via mail

END_OF_DOCUMENT_TOKEN_TO_BE_REPLACED
Social media
and networks
Subscribe to our
newsletter