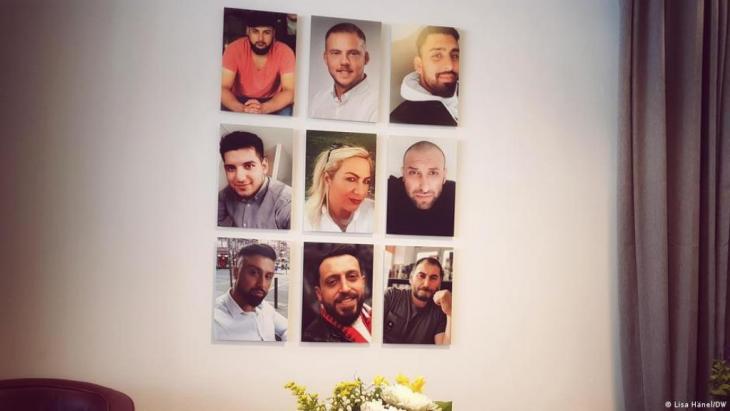 Islamisation, a racist conspiracy theory
The hatred of Hanau and its enablers

The Hanau terror attack showed just how dangerous racist conspiracy theories can be. And yet it is a threat that continues to be underestimated. Commentary by Daniel Bax

Hanau marked a turning point. After the shootings, Chancellor Angela Merkel used the word "racism" for the first time. She even convened a cabinet commission against racism and right-wing extremism, which presented a comprehensive list of measures in November 2020. Even Interior Minister Horst Seehofer could not avoid speaking after the attack of a "trail of blood left by right-wing terrorism".

The shootings in two shisha bars in Hanau marked the culmination of a bloody year, which saw a series of attacks that began in June 2019 with the murder of Kassel's District President Walter Lubcke and then claimed the lives of two people in Halle in November. Had the perpetrator there succeeded in breaking open the synagogue's heavy wooden door, a massacre would have occurred.

The three attacks are linked by the hatred driving the perpetrators: toward refugees and migrant youths as agents of an alleged "foreign infiltration" of Germany, toward Jews and Muslims as members of scorned religions, and toward politicians as representatives of a despised system.

The victims of these attacks are therefore to a certain extent interchangeable. This is particularly evident in the case of the Halle assassin, who had originally planned to attack a mosque, but could not find one in Halle. When he was unable to gain entry to the synagogue, he stormed into a nearby kebab shop instead and shot a man he mistook for a "Muslim", as he later testified in court.

The right-wing terrorist who killed nine people at the Olympia shopping centre in Munich on 22 July 2016, most of them young people of Turkish and Kosovar Albanian origin, likewise hated Muslims. He revered by contrast the Norwegian right-wing terrorist Anders Behring Breivik, who unleashed a bloodbath in 2011 among participants in a Social Democrat youth camp on Utøya island in Oslo, as a role model and idol.

He carried out his attack in Munich on the fifth anniversary of the shootings in Norway. And yet it took the Bavarian authorities and many media outlets several years to classify this act not as an apolitical "rampage" and "act of revenge" by a victim of bullying but as a right-wing extremist attack. The racist motive was played down and relativised.

The assassins in Munich, Halle and Hanau, like their role model Breivik, had all posted a "manifesto" on the Internet shortly before their deeds as "justification" for their killing sprees. Because they were well aware that they were not entirely alone in their visions of the enemy.

The "Muslim man" has in particular been repeatedly marked as a foreign threat in the many public debates on "clan crime" and Islamist terrorism, on the events of New Year's Eve 2015 in Cologne, on "honour killings" and on Thilo Sarrazin's rants about Muslim birth rates.

Certain media and of course the right-wing AfD party repeatedly try to instil fear of the "Islamisation" that purportedly threatens German society. The specialist in American studies Michael Butter, who has written a book on conspiracy theories, cites the phantasm of "Islamisation" as the most persistent conspiracy ideology at present. According to this delusion, Muslims are deliberately infiltrating Europe and displacing the ancestral population through massive immigration and high birth rates.

Best-selling authors including Oriana Fallaci, Udo Ulfkotte and Thilo Sarrazin have popularised this fantasy, and French writer Michel Houellebecq took it up in his novel "Submission".

In the right-wing radical and ethnic-identitarian milieu, this paranoia translates into the theory of a "Great Replacement" that is supposedly being steered from the very top. Behind the strategy are ostensibly either liberal "elites" or the philanthropist George Soros, who is referred to here by the anti-Semitic cliche of the "Jewish string-puller". Hatred of Muslims and classic anti-Semitism are thus joining hands.

The storming of the Capitol in Washington demonstrated the power of conspiracy myths when propagated by heads of state. The conspiracy fantasy of the "Islamisation" of Europe is also being spread by the powers that be: by Hungary's Prime Minister Viktor Orban, for example, and by the Polish government.

Today, 19 Feb marks the anniversary of the white suprematist hate crime in #Hanau The violence did not happen in isolation by some “lone wolf” but part of the ongoing anti-Muslim sentiments and policies in European society. #SayTheirNames pic.twitter.com/KwyxhpT9YF

Quite a few established media channels and above all racist hate blogs on the Internet are further contributing to weaving this fabric of fear. The danger posed by these influences is still greatly underestimated.

For far too long, politicians and the public have stood idly by or regarded such attacks as a kind of petty offence – as a somehow understandable reaction to the fact that our society is becoming increasingly diverse.

PI-News, the inflammatory blog with the widest reach among German speakers, has been spouting hatred against Muslims and politicians on a daily basis for the last 17 years. And yet it has still not been deemed worthy of observation by the German Office for the Protection of the Constitution. Four years ago, the home address of the murdered District President of Kassel, Walter Lubcke, was made public in the comments column. And as recently as January, the blog defiantly posted: "No sympathy, no mourning for Walter Lubcke."

The anti-Muslim PEGIDA movement was likewise never monitored by the Office for the Protection of the Constitution – not even after a speaker from its ranks carried out two terrorist bombings in Dresden in September 2016, one of them on a mosque.

One year ago today, a far-right extremist massacred 9 people in the German town of Hanau. I spoke to their families, whose unrelenting campaign demands not just remembrance — but an end to institutional racism. My latest for @openDemocracy. #saytheirnames https://t.co/ed1T0WIWB0

The terrorist group Freital, which perpetrated a total of five bomb attacks on left-wing politicians and asylum shelters in 2015, had links to PEGIDA. And yet no action was taken against the organisers and spokesmen of the right-wing extremist movement.

At least the AfD party is now under closer observation since the shootings in Hanau. Since March 2020, the now formally dissolved "voelkisch", or extreme nationalist, wing of the AfD led by Bjorn Hocke has been classified as "definitely right-wing extremist" and put under observation. The Office for the Protection of the Constitution wants to classify the entire party as suspect, and the AfD is trying to defend itself in court.

But what else has changed since Hanau? Thanks to the tireless pressure exerted by the bereaved and by a local initiative,  the attack in Hanau has not been forgotten and its victims are remembered: #saytheirnames.

However, attacks on Muslims and mosques are still commonplace in Germany and have even increased over the past twelve months, with more than 900 criminal offences counted by the authorities in 2020. Anti-Semitic crimes likewise hit a new high at 2,275. Most of them are the work of right-wing extremists.

Sensational police raids on shisha bars are also an almost daily occurrence, although they rarely turn up anything besides undeclared tobacco. Last year the Berlin police even launched major raids on two mosques on the suspicion that they had received unjustified COVID-19 emergency relief.

And in a recent advertising clip advocating a crackdown on "clan crime" the conservative CDU party shows two Arab-looking young men in a Lamborghini. This, too, contributes to stigmatisation.

Not everyone learned something from Hanau.

Daniel Bax is an author and journalist. He writes about migration and religion, racism and anti-Semitism, pop culture and global music. He worked at taz, die tageszeitung until 2017 and has published two books - on anti-Muslim racism ("Angst ums Abendland", 2015) and on the rise of right-wing populism ("Die Volksverfuehrer", 2018).

Racist attack on Hanau: Not the only Nazi ideologue...

Interview with Kay Sokolowsky: Racism dressed up as criticism of Islam

Home
Print
Newsletter
More on this topic
Non-fiction: ″Angst ums Abendland″ by Daniel Bax: The apocalyptics of the WestIslam and the West: What Islamisation?Radical critics of Islam and Islamophobia: Denying the individuality of minority membersFresh dispute over Islam: Why the German media are courting the anti-Islam movement
Related Topics
AfD | Alternative for Germany, Criticism of Islam, Islamophobia, Media in Germany, Muslims in the West, NSU trial, Racism | discrimination, Radicalisation, Right-wing populism, Xenophobia
All Topics

It is possible to write about the Holocaust and the crimes of colonial powers without downplaying anything. In her latest book, Charlotte Wiedemann focuses on the numerous blind ... END_OF_DOCUMENT_TOKEN_TO_BE_REPLACED

This year Annemarie Schimmel, the great German scholar of Islamic studies, would have turned 100. Unique within the German and international academic community of her time, ... END_OF_DOCUMENT_TOKEN_TO_BE_REPLACED

The highly controversial Indian blockbuster "The Kashmir Files“, on the exodus of Kashmiri Hindus in the 1990s, is characterised by unilateral representations, negative ... END_OF_DOCUMENT_TOKEN_TO_BE_REPLACED

Asked about the Shoah, Palestinians often bring up the Nakba, the displacement of Palestinians associated with the founding of the state of Israel. An Israeli Holocaust researcher ... END_OF_DOCUMENT_TOKEN_TO_BE_REPLACED

END_OF_DOCUMENT_TOKEN_TO_BE_REPLACED
Social media
and networks
Subscribe to our
newsletter