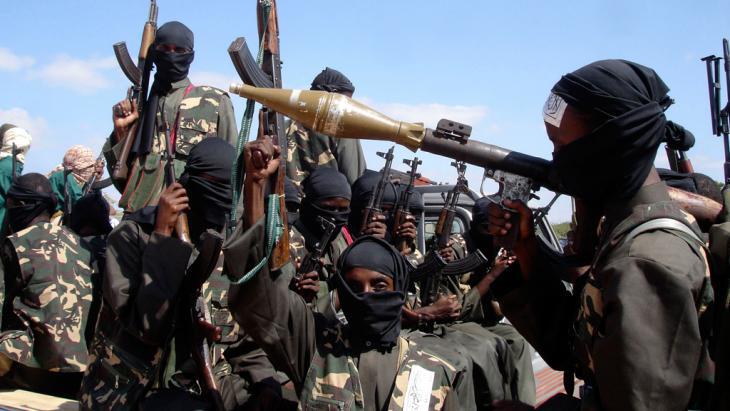 Not immune to terror

Somalia, Kenya and their neighbouring countries are increasingly being haunted by extremist violence. This essay assesses why this region has become a hotbed of Islamism and why one-dimensional military interventions by external forces have not delivered the desired results. By Emmanuel Kisiangani

In eastern Africa, the Islamic faith has been used for political purposes for a long time. Muslim groups were active in various movements, including the mostly secular liberation struggles against the colonial powers in places such as Tanzania (then Tanganyika), Sudan and Somalia.

In national politics, adherence to a particular faith often defines allegiances and roles in politics. In a short essay of this kind, however, it is impossible to convey the entire complexity of the matter. This essay is, therefore, concerned with a more recent phenomenon of political Islam in eastern Africa: violent extremism, which will be called "Islamism" here. Its intolerant ideology is to enforce Koranic rules by radical means, regardless of a country's constitutional order.

Eastern Africa was largely inoculated from Islamist violence until the "war on terror" that started in the late 1990s. In 1998, the US embassies in Nairobi and Dar es Salaam were attacked by foreign terrorists linked to al-Qaida. Since then, terrorist groups have slowly emerged in the region itself. Violent Islamism has increasingly become interwoven in local conflict systems, particularly in Somalia and Kenya.

Somalia: a patriotic cause

In Somalia, the upsurge of malevolent Islamism must be seen in the broader context of decades of civil strife, economic mismanagement, a lack of governance and ill-conceived foreign interventions. The emergence of the brutal al-Shabab militia in early 2007 was, for instance, fuelled by Somali patriotic militancy against the abrasive counter-insurgency tactics used by the regular Ethiopian military. Ethiopia had invaded Somalia in an attempt to wrest control from the Islamic Courts Union, which had taken over large parts of the strife-torn country. The Ethiopian intervention was appreciated by Washington and some other Western governments.

Al-Shabab is a self-proclaimed Islamic militia that rose up against the Ethiopian troops and the western-backed Transitional Federal Government (TFG). Al-Shabab considered the TFG to be a "puppet regime" and called its Ethiopian backers "invaders". 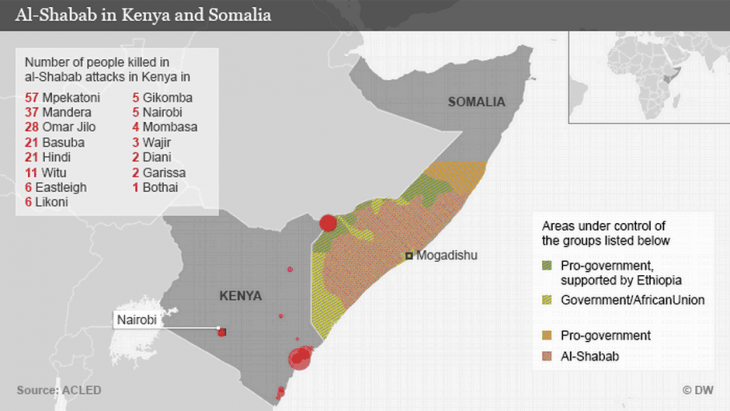 According to Emmanuel Kisiangani, people in Kenya's coastal and north-eastern regions are predominantly Muslim and share al-Shabab's feelings of political marginalisation and even persecution. The Sunni extremists of al-Shabab have been responsible for a series of attacks in Kenya since 2011. Its declared goal is to turn Somalia into an Islamist state and to introduce Sharia law to the Horn of Africa

The militia's declared goal is to turn Somalia into an Islamist state. Accordingly, it focused its attention on the TFG and the African Union Mission in Somalia (AMISOM) after Ethiopia withdrew its forces in December 2008 and January 2009. AMISOM is a regional peace-keeping mission that was initiated in 2007. So far, it has been impossible to uproot al-Shabab because the organisation, apart from evolving and adopting new strategies, enjoys the backing of local communities that feel protected, rather than threatened by it. Making matters more complex, ethnic Somalis live in Ethiopia and Kenya as minority groups.

The one-dimensional armed interventions against Islamists, however, have fostered a violent fundamentalist backlash. Markus Virgil Hoehne has shown why external counterterrorism measures have been counterproductive. Social, cultural and political cross-currents in the region defy easy military solutions. This does not mean that the war against terror is unjustified. The point is that complex issues of local needs, identity and faith must be considered if it is to be won.

In Kenya, an important reason for the growing frequency of acts of extremist Islamism is that Nairobi, the capital city, has for some time now not been at ease with the country's periphery, especially the coastal and north-eastern regions. The populations of these regions are predominantly Muslim and share sentiments of political marginalisation and even persecution.

In the 1990s, the separatist Mombasa Republican Council (MRC) emerged on the Kenyan Coast, demanding, among other things an independent state to liberate the coastal people "from mistreatment and marginalisation by successive Kenyan governments". The MRC, which was not originally faith-based was, in 2010, declared illegal by the Kenyan government and has in the recent past gone underground.

Many coastal communities do not support the group's secessionist claims, but they evidently share its sense of grievance. To some extent, feelings of discrimination and marginalisation also mark criminal networks along the coast.

There is reason to worry about the converging goals of various militant and insurgent groups in eastern Africa, including al-Shabab, the MRC and alleged militant networks in Zanzibar. Problems are compounded by the fact that Kenya has deployed troops in Somalia to fight the insurgents. The Kenyan military moved into Somalia in October 2011.

In retaliation, the extremists have launched attacks in Kenya. More than 600 people have been killed, and a significant number of the terror attacks were carried out by Kenyan al-Shabab fighters, some of whom had converted to Islam only recently. Some experts reckon that about a quarter of al-Shabab's fighters are Kenyans. 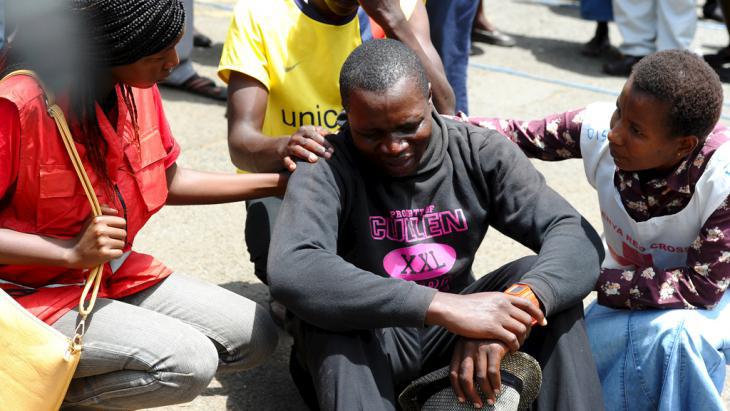 Collective trauma: in April 2015, the Islamists of the al-Shabab militia attacked Garissa University in Nairobi, killing roughly 150 people. Most of those killed were Christian Kenyan students. In September 2013, members of the al-Shabab militia stormed the Westgate shopping centre in Nairobi. No less than 67 people were killed in the stand-off that followed. Pictured here: a distressed man is assisted by two women after the attack on Garissa University in April 2015

Al-Shabab has significant links to local communities, both in Somalia and parts of Kenya. Even though it has been driven from Mogadishu and Kismayo, two important Somali cities, where it levied taxes from traders, al-Shabab still has considerable financial support. Moreover, it is successfully recruiting fighters.

In Kenya, the target group is young men in their 20s. Recruitment is linked to poverty, structural inequalities and youth unemployment. Indeed, low-ranking al-Shabab leaders are said to get the equivalent of $60 to $200 per month. It is no coincidence that al-Shabab seems to have drawn more recruits in the north-eastern and coastal regions. Reports suggest, however, that the organisation is keen on building a multi-ethnic generation of fighters, rather than relying only on ethnic Somalis.

Some educated young men from comfortable backgrounds have also joined the group. For instance, Abdirahim Mohammed, who participated in the killing of 147 students at Garissa University in April, is the son of a Kenyan government officer and a law-school graduate. It seems unlikely that someone like him would be driven by economic motives. He was probably inspired by a religious ideology of the fight between Muslims and those they see as unbelievers. Reinforcing religious fault-lines in Kenya, al-Shabab has recently been targeting Christians.

On the whole, extremist Islamism in eastern Africa is inextricably linked to historic grievances and local dynamics. As Chris Harman, a British journalist and socialist has pointed out, post-colonial societies were traumatised by imperialism and subsequently suffered exploitation by domestic elites and multinational interests.

These issues cannot be resolved by military action as such. Even though external troops have inflicted substantial damage on al-Shabab, the group maintains its strategic advantages thanks to its strong links to local communities who consider the militia legitimate. A viable solution to dealing with al-Shabab and similar groups lies in winning over the civilian population. Otherwise it will be impossible to beat the Islamists.

Emmanuel Kisiangani
© Development and Cooperation 2015
Emmanuel Kisiangani is a senior researcher at the Nairobi office of the Institute for Security Studies (ISS Africa). The ISS Africa is based in Pretoria and also has offices in Addis Ababa and Dakar.

Organised by interfaith NGO Religions for Peace, an international conference in Lindau on Lake Constance is dealing with the peace-building role of women inspired by the faith of ... END_OF_DOCUMENT_TOKEN_TO_BE_REPLACED

The small East African nation of Djibouti has so far evaded musical discovery by the West. Now, however, the country's official national band, Groupe RTD, is picking up ... END_OF_DOCUMENT_TOKEN_TO_BE_REPLACED

The end of July saw the launch of the African Union’s "Sauti" digital publication, the first young feminist platform in Africa, which this year showcases stories by female youth ... END_OF_DOCUMENT_TOKEN_TO_BE_REPLACED

The outpouring of solidarity worldwide following the violent death of George Floyd should prompt us to step back and fundamentally question racist structures and privileges based ... END_OF_DOCUMENT_TOKEN_TO_BE_REPLACED

Jeddah is very different from other cities on the Arabian Peninsula, says Ulrike Freitag, historian of the Modern Middle East. In her book "A History of Jeddah", she explores the ... END_OF_DOCUMENT_TOKEN_TO_BE_REPLACED

END_OF_DOCUMENT_TOKEN_TO_BE_REPLACED
Social media
and networks
Subscribe to our
newsletter