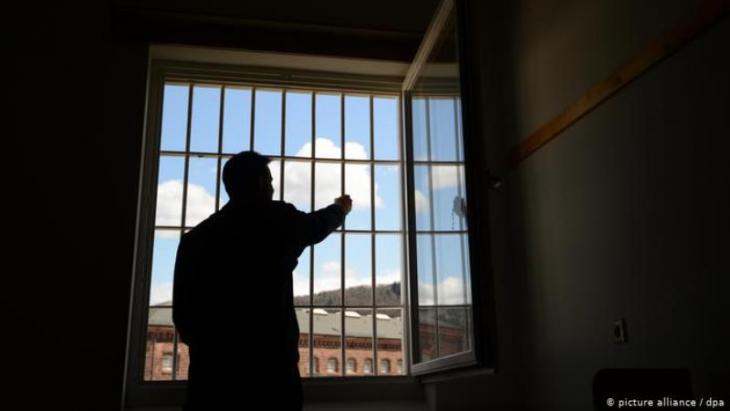 The terror attacks in Paris, Brussels and Berlin were all carried out by men radicalised in jail. In Germany, politics and the judiciary are trying out new approaches to prevent inmates from becoming extremists. By Esther Felden and Matthias von Hein

From his bird's eye perspective, the carved wooden Jesus on the ceiling is looking at panes of frosted glass shot through with decorative blue stripes. Behind them, you can just make out the blurred outline of bars at the window. If these weren't there, then you might forget altogether that you're in the church at Bochum prison. The prison is located in Germany's most populous state, North Rhine Westphalia (NRW). In NRW there are more radical Islamists than in any other part of the country.

Bochum prison church is large and bright. An open Bible has been placed on the wooden altar; there are candles on either side. Muslim prayers are also held here regularly now. The door opens and a stocky man is led in. He's in his mid-to-late 50s: he's wearing a black baseball cap, covering hair that's been tied back into a short thin ponytail, cargo pants and trainers. He greets with a firm handshake and looks his interviewer straight in the eye. The prisoner doesn't give his name. For the purposes of this story, we'll call him Batuhan.

One in every four prisoners in NRW is Muslim

Batuhan comes across as the model Muslim prisoner, conducting himself just as the German authorities would wish him to behave: he is remorseful, reflective and tolerant. Born in Turkey, he has lived in Germany since the age of four. He's been in detention since March 2014, sentenced for fraud. He explains that he used to work with cars and real estate. But that's all he's prepared to say.

Batuhan is one of some 15,000 prisoners currently detained in NRW. A quarter of these are Muslims. By the middle of last year, the state justice ministry told Deutsche Welle (DW) that 33 persons "from the Islamist spectrum" were serving sentences in North-Rhine Westphalian jails.

Described as potential threats, these individuals are spread across various facilities to prevent them from joining forces to form a radical cell. Bochum is among them. But DW is denied access to these men. All that is allowed as an interview with a man like Batuhan.

Nationality and religion, he says, play an important role for many prisoners in their everyday lives. He too only found God behind bars "because you don't have much else here apart from (your) gangs."

Threat identified – but not averted

Those in charge are currently gearing up for an increase in the number of radical Islamists in German prisons. Last year alone, federal prosecutors in Karlsruhe initiated 855 investigations into suspected radical Islamists.

Moreover: Following the military defeat of Islamic State (IS), research by public broadcaster WDR shows that more than 120 jihadists with connections to Germany are being held in Kurdish-controlled areas of Syria. Others are being detained in Iraqi jails. Should they return, many of them will probably face criminal proceedings in Germany.

Home
Print
Newsletter
More on this topic
Islamist ideology debunked: Getting past the abuseCountering radicalisation with '180° Turn': Together we are strongSalafism in Germany: Left-wing terrorist turned Islamist
Related Topics
'Islamic State' | IS, Islamism | Political Islam, Jihadism | Jihadists, Radicalisation
All Topics

Algeria‘s regime is again cracking down on anti-fracking activists and the unemployed in the country‘s south. Yet EU countries remain keen to scale up their energy cooperation ... END_OF_DOCUMENT_TOKEN_TO_BE_REPLACED

Bachtyar Ali sends the hero of his latest novel – "Mein Onkel den der Wind mitnahm" – literally flying. Jamshid is so thin after his years as a political prisoner that a gust of ... END_OF_DOCUMENT_TOKEN_TO_BE_REPLACED

For a century, the Kurds and other minorities in Turkey have been subject to state repression. With his dissertation "The Kurdish Question in Turkey", political analyst Ismail ... END_OF_DOCUMENT_TOKEN_TO_BE_REPLACED

Anti-Semitic motifs have no place at Germany’s documenta art show or anywhere else in the world, stresses Meron Mendel, director of the Anne Frank Educational Centre in Frankfurt ... END_OF_DOCUMENT_TOKEN_TO_BE_REPLACED

A new exhibition, "Syria – Against Forgetting", at Cologne’s Rautenstrauch-Joest-Museum focuses on Syria's artistic and cultural heritage and pays tribute to the country before ... END_OF_DOCUMENT_TOKEN_TO_BE_REPLACED

Madrid's about-face on the Western Sahara conflict has enraged Algeria. Trade relations have been frozen unilaterally and a cut in gas supplies to Europe could be in the pipeline ... END_OF_DOCUMENT_TOKEN_TO_BE_REPLACED
Author:
Esther Felden und Matthias von Hein
Date:
Mail:
Send via mail

END_OF_DOCUMENT_TOKEN_TO_BE_REPLACED
Social media
and networks
Subscribe to our
newsletter